New from Namco comes Eternal Night: Realm of Souls, a finely-crafted adventure game that employs hidden object elements and some very creative puzzle solving. It appears the great Ra has abandoned his people, forcing them to starve under harsh, sunless conditions. To discover the cause of the god's anger, the pharaoh asks for a volunteer to venture to the afterlife. You are that volunteer, and you must root around in the mystical ancient Egyptian afterlife as you search for clues, solve puzzles, and experience some genuinely strange imagery. 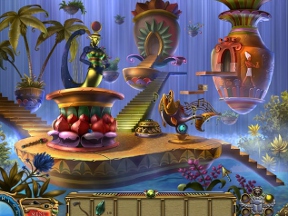 As you probably guessed, the Underworld isn't the friendliest of places, and you'll encounter danger after danger after puzzle as you trek through the territory. Most of your time will be spent searching for items to store in your inventory to use to solve puzzles in nearby areas. The very first room, for example, asks you to locate various foods to make an offering that will open a door. The cursor helpfully changes when you can manipulate, collect, or inspect objects further, so no pixel hunting will be necessary!

Eternal Night: Realm of Souls employs an attractive and extremely useful task system represented by a series of orbs. Each orb outlines an objective in just one or two words. Once it's completed, a check mark appears over it. Orbs connect to each other to form a series of tasks that need to be completed to move on to the next room. Using the game's hint feature uncovers an orb ahead of time, allowing you to peer a few moves ahead to see what needs to be done. Not only does this feature look great on the screen, but it manages to nudge you along without spoiling any of the puzzles.

Mini-games are also appear in Eternal Night: Realm of Souls, and you can even consider the sparse hidden object areas to be just another mini-game. We're not talking simple sliding puzzles or rudimentary number riddles, either. Eternal Night features several unique and interesting mini-games that both remain true to the ancient Egyptian theme and get you to do a little thinking outside of the box. 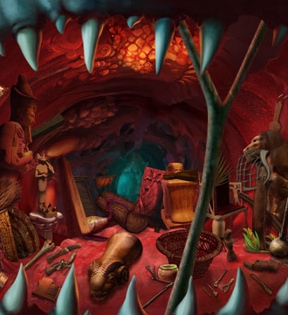 Analysis: It seems like we say this often, but Eternal Night: Realm of Souls is a very good looking game. It doesn't need to take rooms full of artists to produce a title that's pleasing to the eyes, just a little attention in the right places. Eternal Night has that attention, as everything from the interface to the world itself is smooth, crisp, and very friendly to look at. The storytelling and voice acting trip up a bit from time to time, but when you're immersed in something this good, it isn't really an issue.

From a gameplay point of view, Eternal Night: Realm of Souls takes a few steps in the direction of adventure gaming, leaving hidden object finding covered in shadows exactly where it should be. Solving puzzles is satisfying. Very satisfying. Your hands are never held, your cursor is never guided. At the same time, you're never really stuck thanks to the slick task bubble menu. Eternal Night hits the sweet spot between challenge and casual entertainment, and for that alone, this game is worth checking out!

With its originality, though, comes a bit of repetition. The first time you see one of the game's neat mini-games, you'll grin. The second time, smirk. After that, you'll just kinda shrug, as the novelty has worn off. You won't be bored, of course, but when presented with original content, you kind of get spoiled, especially with the hidden object "find then place" sections.

Plenty of content to stir your interest, a great presentation to keep you enthralled, and perfectly-honed puzzles to keep your brain intrigued. Eternal Night: Realm of Souls gets everything just right!

The pacing of this game is kind of a mess. After playing the Treasure Seekers series I'm used to the "Loading..." screen implying "You're done with this level now; you don't have to go back for any reason." But that's not the case with EN:RoS and it just kills momentum to wait through "Loading..." between sequences. Another momentum killer is the forced voiceovers - I usually play H/Os with the sound down after everyone's gone to bed, and not being able to skip through the speech bubbles is annoying.

The one thing making me not regret purchasing this game is the artwork.