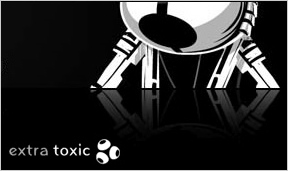 Remember that amazingly good platformer, Mission in Snowdriftland, we mentioned last week? The one that was organized like an advent calendar and sponsored by Nintendo? (If you didn't you should play it immediately after reading this) Well, Casual Gameplay contributing author, Thomas, had a chance to catch up with the developers of the game, extra toxic, as both he and the company are located in Germany. Here is a translation of what Christiane had to say of the company and their work:

Thomas (Casual Gameplay): How big is your company? Do you have any employees additional to the three founders [Christiane Fritsch, Steve Welz, Bogac Sariaydin] yet?

Christiane (extra toxic): No, we are (as of yet) three people, which works quite well due to shared tasks (design, programming, project management).

In your portfolio there are projects for Nintendo (among other big names). What role did Nintendo play in the creation of Mission in Snowdriftland? Was it commissioned by Nintendo, or did they 'merely' sponsor it? How much creative room did you have for game design?

Nintendo just sponsored, i.e. bought ad space for the featured games. Idea, concept, implementation, the whole project is extra toxic's brain child. Thus we had as much room for creativity as we wanted.

In your portfolio, all previous projects date early 2006. How old is extra toxic?

Our company was founded July 2005.

Have you developed other titles that would fit into the casual games category?

Not as extra toxic, but the three of us know each other for several years now, and we worked together in a marketing agency as employees. There we have developed several flash games, all of which—just like the advent calendar—have been developed from scratch, including the game idea, layout, avatars, etc.

That's very important for us. If someone commissions a game, they won't get the 15486 clone of Moorhuhn [explanation: Moorhuhn is a point&shoot arcade game, that created quite the craze in Germany a couple of years ago. It might still lower productivity in some offices. I don't know if it had a similar impact internationally.] from us, but instead a high-quality, individually designed game with lots of creativity and passion.

Experience the magic and exceptional talent these folks bring to the art of casual gameplay. Click.

Woah. They're pretty awesome. M.I.S. (Mission in snowdriftland) was exceptionally well done and I really liked it. It's always good to see someone who actually cares about their work, instead of just the glory their games may bring them. Thanks for showing me this, Thomas. ' useful information.

I once went to a graveyard and befriended a dead guy named Thomas.
I really don't see the point of abbr. (abbreviating) something, if you're just going to write it out anyway, but I did...