Of all of the creepy fairy tales we tell our kids — and there are some supremely creepy ones indeed — one that stands out is the Pied Piper of Hamelin, in which a town that doesn't like to pay its debts ends up losing all of its children to a dude who charms rats with music. This haunting tale seems ready made to become both a childhood nightmare and a casual adventure hybrid, so it's just as well that Blue Tea Games has taken up the challenge with Fabled Legends: The Dark Piper, a hidden object finding adventure that features lots and lots of rats, both in vermin and human form. Rats, why'd it have to be rats? 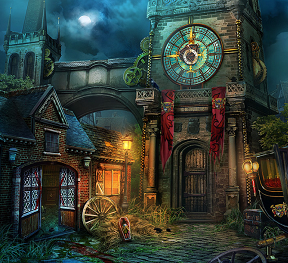 The action begins as you, an unnamed inspector, rush to a town that usually celebrates the story of the Pied Piper and how he saved the place from rodents. The Pied Piper appears to have come back for revenge, however, and rather than stealing the children he has simply brought the rats back with him. Dark, red-eyed, savage, plague-bearing rats, which have overrun the town and sent the population away screaming. The few town officials left have begged you to track down this mysterious man and help save the town before the plague can spread across Europe in a modern-day version of the Black Death. Solve the mystery using the clues that can be found around town, some help from the few characters left, and dodging a lot of animated rats..

Fabled Legends: The Dark Piper is classic hidden object finding fused with point and click adventure. The hidden object scenes are the standard "list" type, which feature one or more objects that must be manipulated before they can be found. There are also some mini-games and puzzles scattered about the place, along with the usual adventuring tropes involving gathering items from every locale. 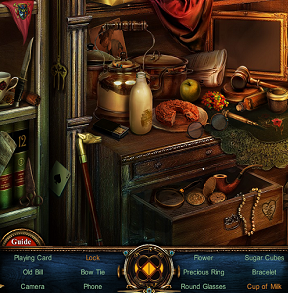 Gameplay features the standard controls seen in most hybrids these days with a changing cursor to indicate areas of interest and navigation, a bottom-loading inventory, and a journal to keep track of the story. The journal also helps you keep track of a list of running goals which lengthens as time goes on. A handy little map feature is also present, which allows you to keep track of areas and indicates whether or not there is still something of interest to be discovered. Unfortunately you can't use the map to instantly transport yourself from one location to another, which would have been helpful. There is a timed hint system personified with a beautiful animated cat who, while recharging, amusingly turns his back and ignores you with supreme disdain until the timer fills up again. A plethora of glints and sparkles indicate all sorts of interesting areas, at least in the easy mode.

Analysis: Blue Tea Games is one of the leaders in the hybrid field, and it's easy to see why with Fabled Legends: The Dark Piper. The designers who brought us the Dark Parables series and the joyful Enlightenus games have once again brought their A-game to the design of this dark little adventure, with an engrossing story, stunning graphics, and entertaining gameplay. This is an already dark fairy tale gone even darker and it makes for engrossing gameplay. 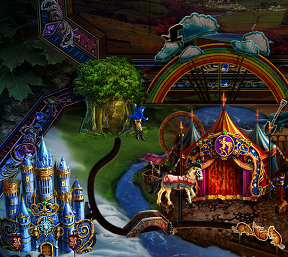 The stunning visuals are expected as all Blue Tea Games are gorgeous. The animations are, well creepy since they are mostly of evil villains and lots and lots of rats. The presence of vermin runs so strongly throughout the game you might be tempted to shower afterwards to feel clean again. Background music, incidental sounds, and even the dialogue fuse the experience together into a delightful mélange. Fabled Legends: The Dark Piper is a pretty immersive experience from first to last. Puzzles and mini-games range from easy to difficult and the three modes of play (casual, normal, and hard) cover a wide variety of experience with adventure hybrids.

Fabled Legends: The Dark Piper is a stand-alone story which pulls together all of the elements needed to make a really entertaining adventure hybrid. Gorgeous on the eyes and ears, gameplay that is adjustable to a wide range of talent, and an engaging story guarantee that once again Blue Tea Games has a hit on their hands. If you can stand the creepy factor of thousands of rats then Fabled Legends is the game for you! Then, to cleanse your pallet, perhaps go watch something a little less rat-ridden, like "Willard".

Chapter One: Summoned to Hamelin

Getting the Stable Key

Getting the Bronze Scepter

Going to the Lake

Getting the Raven Disk

Getting the Jade Eye

Getting the Rust Remover

Getting the Rusty Pick Axe

The Right Door in the Clock Tower

Getting the Burnt Half Mask

Chapter Six: The Skeleton Key and the Pied Piper's Flute

Getting the Book of Maps

Taking the Bucket of Alcohol

Taking on the Viceroy

Chapter One: Summoned to Hamelin

Getting the Stable Key

Getting the Bronze Scepter

Going to the Lake

Getting the Raven Disk

Getting the Jade Eye

Getting the Rust Remover

Getting the Rusty Pick Axe

The Right Door in the Clock Tower

Getting the Burnt Half Mask

Chapter Six: The Skeleton Key and the Pied Piper's Flute

Getting the Book of Maps

Taking the Bucket of Alcohol

Taking on the Viceroy