To quote the intro of Fallen City, Channel 4 and Big Robot's educational puzzle/real-time strategy game: What is a city? It is a machine; a machine for living in. But all machines can break down. The inhabitants of Fallen City (Angries) have become distracted by their individual lives and dreams and have let the once gleaming metropolis fall into disrepair. Frustrated by their inability to live the lives of fame and fortune they were told could satisfy them, many of the Angries fell into boredom or rage... and the city sunk ever deeper into its gloom. But broken machines can be fixed, right? A few Angries with hope to spare know that a few friends and a little dedication can work wonders. But they'll need your help to get the Fallen City back on its feet, to once again become a place where life is worth living. So roll up your sleeves and put that Broken Window Theory to the test! 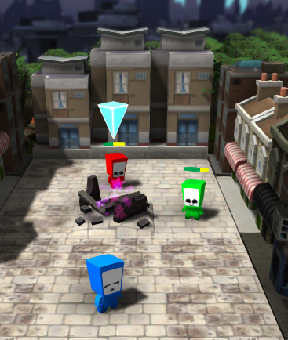 Fallen City is all about commanding Angries to do the things that need to be done, namely cleaning up this disgusting city. Click on anyone with the left mouse button to select them, then right click somewhere else to put them to work. You can select several areas to work on in a row and the Angry will clean them in a sequence. Angries can find new skills by uncovering books or by cleaning certain condemned buildings, renovating them, and staffing them with other Angries. You can use these skills to inspire other workers, open new areas, or to calm down the rampaging purple Really Angries. Once you find, clean, and staff the stage's key building, the level will be complete and you can move on to the next dingy part of town!

Analysis: Fallen City is unlikely to win any awards for subtlety of message, but really, that's part of its charm. The idea of cleaning up a city, block by block, building by building, admittedly sounds very grindy when put on paper. However, the concept of turning a drab space into something lively and energetic is an inherently appealing premise, as anyone who's every played Animal Crossing can attest to. Actually, a better comparison may be to the most addictive of Facebook social simulation games (and indeed, it wouldn't be hard to conceive of a port): a game in which your every action serves to make your virtual world a little bigger and a little brighter, so much so that it's hard to tear yourself away. Of course, it's to Fallen City's benefit then that it is both completely free and way prettier than the vast majority of WhateverVille games out there. But don't think for a moment that means the game is a simple walk in the park. 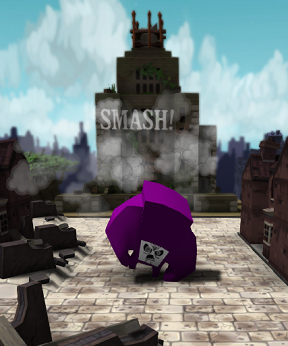 Fallen City's setting and inhabitants are the obvious stars of the experience. The city design feels similar to the one in de Blob, which is a good thing, though it has a bit more of a English suburb feel to it. The ruined buildings are properly twisted and Dickensian, while the clean areas gleam without feeling too artificial. It was a nice touch that the sound design subtly changes to be more pleasant, the more repaired the city is, i.e. bursts of static and ominous barking dogs transformed into pleasant chatting. The Angries themselves are a joy to behold, packed with such humorous character in their design, whether they're dancing, chatting in their language, or kicking back and having a cuppa. Channel 4 had better be starting on plush versions, stat.

A few negatives are worth mentioning. For a game that centers itself around coming together and rebuilding a community, there seemed to be precious little interaction between the Angries themselves. You control only one at a time, and while it's cute to see the others Angries laze about, watching a refurbished TV or quietly smiling, it would be really cool to be able to direct a cluster to clean a path down an alleyway or, better yet, see them do it of their own accord. Also, the control scheme may be a little too complicated for its presumably young target audience. A movable camera is infinitely preferable to one you can't move, but with so many 3D buildings to block the field of view, one feels that a more elegant solution must be available.

Even if it is a little blatantly presented, one cannot fault the message of Fallen City: that the state of our city affects the state of our lives, and its health is linked to our own. Our space takes care of us, as we must take care of it. Undeniably, this is a over-simplified view of the many problems that afflict our infrastructure, but it is still a correct one. After all, if, after spending a few hours on Fallen City, a couple of players decide to spend an afternoon picking up trash in the park, making it a little more beautiful, nobody's gonna, y'know, mind.

I didn't care for it.

It was difficult/non-intuitive to rotate the camera.

Too cutesy for a smooth flowing casual game IMO.