Bethesda's Fallout Shelter, free for iOS and coming soon to Android, is sort of weird. Created to promote the upcoming time-devouring beast we all live in fear and anticipation of that is Fallout 4, it's a simplified management simulation in which you try to keep your growing community of eternally grinning "Vault Dwellers" alive and well for as long as possible in a growing underground vault after the end of the world. Doing so means keeping them supplied with food, energy, and water, so you'll need to put your peeps to work by dragging them around to the various rooms until you find something they're good at... each Vault Dweller has their own set of S.P.E.C.I.A.L. statistics (Strength, Perception, Endurance, Charisma, Intelligence, Agility and Luck) that makes them better at some jobs than others, though later on these statistics can be improved or trained. It takes time to generate each resource, however, so it's important not to stretch yourself too thin, since "Rushing" to finish work ahead of time can lead to catastrophic failure instead of an early delivered bounty. You'll earn Caps, of course, from completing tasks and achievements, which can be used to build new things, and Lunchboxes (granted rarely through gameplay or via in-app purchases) offer random cards with a chance at anything from powerful equipment to special Dwellers with high skills. You'll build a radio to draw in other survivors, though also potentially attract the attention of raiders, send explorers out into the Wasteland to find new equipment, and more. Though perhaps not complex enough to keep everyone hooked for long, Fallout Shelter's appealingly simplified approach to post-apocalyptic simulation is worth fans checking out... no hands on experience with radroaches required. 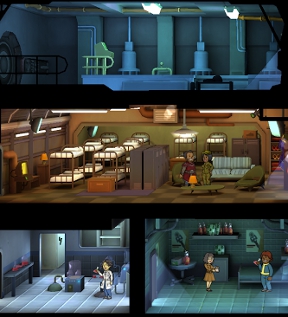 If what you've been craving is basically the sea monkey equivalent of Fallout, condensed into bite-sized format, Fallout Shelter will suffice nicely. While you do have to constantly check in on your Dwellers to harvest resources and the like, the game doesn't really progress that much when you're not playing, so you don't have to worry about coming back to rad roaches and raiders chasing your Dwellers around. It's an extremely low maintenance game even once you start sending Dwellers out to explore the Wasteland, with your involvement mostly limited to "Do this thing", "Stop doing that thing", or "Wear this thing", but watching your Dwellers trundle around, making corny puns and pick-up lines, is still oddly entertaining. However, while it wouldn't be fair to expect a free-to-play promotional mobile game to have the same depth as its bigger, beefier console and desktop-based brethren, Fallout Shelter may still feel a little too shallow for some thanks to how repetitive it is and a lack of any real story or Dweller personalities. Fans hoping for Fallout's tongue-in-cheek black humour and clever social/political commentary might find Fallout Shelter too sanitized, and leave their hapless Dwellers to fend for themselves after a day or two. Sure you might feel a twinge when, as you're about to close the app, one of your Dwellers cheerfully remarks how they're about to compose a poem about how great you are, but hey, the Wasteland's a harsh place, children. Fallout Shelter is a simple, morbidly cheery little simulation that can provide a lot of hilarity (unintentional at times) in return for a few moments of your time here and there. Babies with combovers? Terrible pick-up lines? Things constantly getting set on fire? You do you, Fallout Shelter. You do you.