If the protagonist of the Fancy Pants series were any cooler he'd be a Popsicle. He's so laid back he doesn't even wear a shirt! Just jumps, slides, and stomps his way through a silky smooth platform universe evoking the quirky cartoon adventure games of yesteryear. Brad Borne's latest installment, Fancy Pants Adventures: World 1 Remix, continues this laid back tradition, giving the whole first entry a big tongue-in-cheek redo that's as fun to play as it is difficult to say. Use the [arrow] keys to run, duck and roll, and the [s] key to jump, stomping on spiders and mice and booting them off screen. Fans of the first entry will find the terrain familiar, but Mr. Borne's tossed more than a few surprises into the Fancy stew that will keep you invested. The addition of time trials and a plethora of extras and unlockables just seals the deal. Fancy's back and fancier than ever! 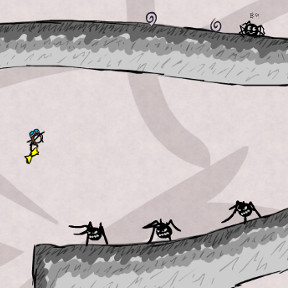 The Fancy games have never been very long, but even so, this entry feels a bit skimpy. You've got four glorious levels and a boss battle to enjoy in both adventure and time trial mode, and the addition of some hidden doors and passageways leading to several extremely creative challenge maps adds some replayability. But even so, this game's more of an appetizer than anything. Mr. Borne promises Fancy 4 is right on the horizon, and the game even gives you the option to support the series with a modest in-game purchase, so if nothing else World 1 Remix gives us a pleasant taste of things to come. And maybe it's just our imagination but the gameplay, graphics, and sound feel subtly tweaked, making this entry feel polished and professional. Fancy flies through the air with all the grace of Wile E. Coyote being launched from a catapult, bringing a sense of rubbery energy to every hop, leap, and kick. A robust physics engine and some wonderfully dorky sound effects complement his wacky movements beautifully. This really is what browser gaming is all about. Brad Borne has given use a classic series in this weird little medium called flash gaming, and while FPA: World 1 Remix leaves us wanting more, it's certainly proved this series still has legs. Legs in baggy fancy pants, that is.

Awesome game! Short, but lots of fun. I can't wait for the next release. Protip for getting the hats from the more "resistant" spiders

Slide/roll into them. Pick up dropped hat. Profit!