The Fancy Pants Adventures is now available for iPhone and iPad! Usually referred to as simply Fancy Pants, this is the fast-moving blur of an action/platform browser game we've all come to worship over the last few years, including the more recent and feature-filled XBLA and PSN releases. Tons of levels, tons of extras, and tons of creativity. It's so much Pants, you'll barely be able to contain yourself! 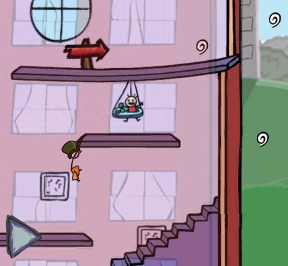 Mr. Pants' girlfriend, Cutie Pants, has been kidnapped by pirates (brb lol!), so it's your job to race across Squiggleville and beyond to save her. Gameplay is about one thing: speed. Ok, speed, and finding cool secret stuffs. Move with the controls on the left side of your iOS device, and jump, duck, or attack using the controls on the right. Build up speed and run smoothly along hills, loops, and more, hopping back and forth like a hypersonic little money (with nice pants). Beyond the main levels, which are elegantly and intelligently designed, Fancy Pants comes with a whole lot of bonuses. The wardrobe alone allows you to customize Mr. Pants with over 140 accessories, and the Fancy Arcade allows you to play a handful of mini-games.

Ready for the bad news? You probably worked this one out already, but because the mobile version of Fancy Pants uses only a touch screen for control, it lacks the precision of physical buttons, making it a challenge to run around without any tactile feedback. Some folks can manage just fine with virtual buttons, but others (like most people on the JIG crew) crave real buttons when it comes to fast moving games of this nature. To each his own, but it says a lot when the game's only drawback is a hardware restriction and not part of the game itself. Fancy Pants for iOS is a stellar release, no matter your control preference!

You can follow the directions to grab the bottle to get close to the star, but here is a refresher.

No Android version? No browser version?

You can follow the directions to grab the bottle to get close to the star, but here is a refresher.