[Note: While this game is technically complete, there is a very sizable update with additional content coming for Part 2 somewhere in the future, potentially a long way off. Part 1 is complete and offers approximately 25 hours of content.

In free indie RPG Faraway Story, crafted by Fantasy Factory and translated by vgperson, you're plucky Pia, a young girl who's striking out on her own to open up her own shop. Sure, she's just had a weird dream about a living doll hurling herself off a floating island, but Pia's not about to let that stop her. She wants to be a pharmacist, and more importantly, she's determined to cure the disease plaguing Port Fina. Except... what's with that floating continent in the sky nobody else really seems to care about? Faraway Continent has floated above Port Fina for so long everyone just accepts it as natural as the sun and the moon, but Pia is enraptured. Still, she's got a fledgling business to set up, mixing medicines, forging new items, running her store and more. But, say... what are the chances you think Pia's screwy dream has something to do with that land mass floating above everyone, and the disease ravaging the town?... naaaaah! And besides, Pia's adventure is just getting started! Fantasy Factory serves up a lovely, perky action RPG adventure with light-hearted charm and plenty of items to craft and secrets to uncover that will make the hours fly by despite what can be at times a frustratingly clunky combat system. 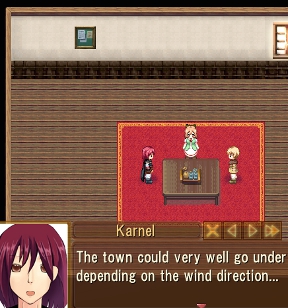 Use the [arrow] keys to move around, [spacebar] to interact, and [V] to open the menu. As Pia explores, she'll not only meet different characters, but she'll also find recipes for items, medicine, and weapons (what kind of pharmacist is she?!) that she can craft back at home to sell in her shop, provided she has the proper ingredients, of course. Different locations you can visit may have different events in them depending on what time of day it is, so don't be afraid to sleep in Pia's bed to advance time, or just heal up. New locations will open up, both in town and on the world map, as Pia's story progresses. Pia's skill in making various items levels up the more she crafts, so don't neglect her store, since her abilities impact her chance of success in making things. 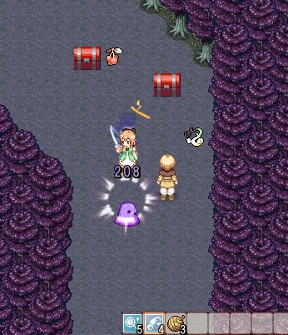 During combat, [X] swings your melee weapon, but don't stand still! Enemies are fighting back, and you can move freely around the battlefield. Holding [C] will make Pia guard, while various skills and items can be set to shortcut slots so you don't need to open the menu during combat. As you'd expect, slaying foes grants experience and levels you up, making Pia stronger. Most "dungeons" have randomized layouts, treasure, and enemies, though you can find maps that take you to specific locations. Eventually, you'll unlock the Mission Board, which allows you to take on specific tasks, and of course you'll need to manage your shop, too, by choosing what to sell and setting your prices on a daily basis.

Faraway Story plays a bit like Recettear mixed with Adventure Bar Story, particularly the former, though Faraway Story's story and characters are its own. The shop winds up taking a back seat to the main adventuring, as it happens, so it feels like the simulation aspects are just sort of... there, rather than an integral part of things. The various characters who come into your store don't have any personality or story, and there's no real rhyme or reason to what they buy, so it's just a matter of throwing everything on your shelves with as much of a markup as you can get away with. Still, the sheer, mind-boggling amount of crafting recipes and items is more than enough to keep any shopkeeper busy! 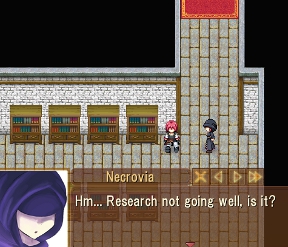 Faraway Story's combat, sadly, just feels sort of kludgy, not snappy and responsive enough to really make it something you want to dive into, especially given the limited enemy AI that makes many party members feel useless. Still, there's so much going on with different elements and statistics that speaks volumes about the developer's determination to flesh the combat out and make it feel unique and challenging, not to mention the unique (and often very funny) descriptions for every single item and skill in the game, that Faraway Story still manages to impress. You may need some time to get the hang of the way things work and develop a rhythm, and you'll definitely want to take advantage of the many, many helpful items and their properties, so working on Pia's crafting is helpful in a variety of ways. 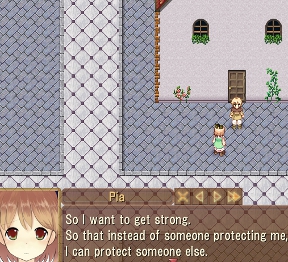 Pia actually makes a great heroine... she's sweet, desperately lacking in self-confidence in the beginning, but determined to save the town no matter what, even if just the words "dark lord" reduce her to stammering terror. Young girls don't often get the same sort of "hero's journey" storylines boys do, and the characters who initially scoff at or dismiss Pia for her anxious, earnest personality come to respect and admire her for her hard work and deeds. The change is so subtle and gradual that nobody seems to realize it's happening, so the way Pia winds up taking on more and more responsibility just because it's the right thing to do in her mind, or the way characters go from sort of patronizingly indulging her to looking to her for guidance and help, feels natural and rewarding. The main story actually takes a while to get rolling, with the first few chapters essentially functioning as an extended tutorial. Once things start moving, however, you'll travel to a wide variety of locations, meeting and recruiting different characters.

Though you might need to make more of an effort to get into some aspects of Faraway Story than the games it's drawn inspiration from, it's still an incredibly impressive feat, and an enjoyable game to boot. It's got a heroine you want to get behind, a great sense of humour, and a tremendous amount of free, action-packed, RPG gameplay that goes to a tremendous effort to enhance and expand on every aspect of the genre's mechanics. Though there are definitely areas of the gameplay that could be streamlined for use, Faraway Story provides so many elements and experiments with its gameplay to such an extent that you'll find a lot to dig into. If you've been craving a bright, cheery, cheeky fantasy game to keep you busy for hours, make a date with Faraway Story, and you won't regret it.

This game is impressive. 50+ hours and I never felt like I was grinding. I much prefer this type of the battle system. It takes some skill and strategy, not just mindless clicking. There is a huge amount of items and recipes and alot of attention to detail.

BTW, you can start chapter 2, but it isn't finish yet, so you cant get past part 2.