Little dude, little adventure, right? Wrong! Gomez may be tiny, but he's got a big destiny... not that he knows it. As far as he's concerned, he's just your average, ordinary 2D critter living in a 2D world... right up until the village elder bestows a great power and a greater secret... Gomez's 2D world isn't 2D at all, and with the power of the mystical Fez, he can rotate through it to discover the secrets hidden at every angle! Which, you know, is going to come in handy since the whole world is going to end unless he tracks down every single piece needed to rebuild a cosmic cube. Polytron Coporation's beloved indie XBLA hit finally makes the leap to PC, and drags players on a massive puzzling, platforming adventure full of charm, creativity, and wonder. 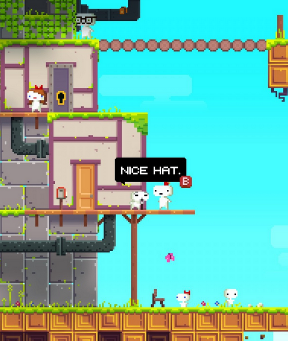 You can play using either the keyboard or a USB controller, and I personally preferred the latter. Gomez has all the usual platforming abilities, like jumping and climbing, but once he dawns the titular mystical chapeau, he gains the power to rotate the world around him like a cube, allowing him to see every side and secret. Additionally, the change in perspective can be all you need to bring a ledge or platform that was previously out of reach close at hand. Most every area will have fragments of golden cube hidden about... eight of them will make a whole cube piece, and many doors will require a certain amount of these pieces to open. Secret hidden anti-cubes count towards that cube total, but will require both some puzzle-solving and keen observation to track down.

Of course, it's not just you and your little legs. You've got a floating magical sidekick who will provide helpful information from time to time, and things like bombs can be nabbed to blow open certain pathways. Most of the challenge, however, comes from figuring out how to change your perspective of the world to your advantage. You're not just looking at something from a different angle, you're actually moving the world around you, which means that a ledge that was out of reach just a moment ago could suddenly be within your grasp if you swing the world the right way. You can't save manually, but the game autosaves for you like mad, and chances are you won't need a manual save anyway because the game has no real hazards to be found other than bottomless pits, and even then you'll just teleport back up to the last ledge you were on. Just because nothing wants to eat your face doesn't mean the game is easy, however, and with piles of puzzles and a whole world sprawling out in front of you, you have your work cut out for you. 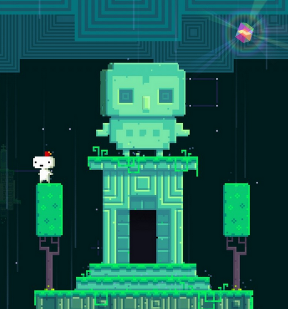 Analysis: We're so used to being the hero in games these days that it's easy to forget how setting out on an adventure should feel. Awe-inspiring, breath-taking, bigger than us, and maybe a little scary. Like taking your uncle's sword in A Link to the Past that rainy night, or Ness stepping outside his home in Earthbound and not knowing when or if he's coming back. Fez gets back to all that. Gomez's newly expanded world not only feels big, but also beckons you to dive right into it and explore because there is something literally around almost every corner. Few games capture that drive of, "Ooooh, what's over there," and fewer still try. As a result, Fez is one of those games that's best suited to one of those days where you just want to relax and sink right into something. The game has more than a few surprises up its sleeve, and likes to shake you up when you least expect it. Sometimes you'll find that a door you thought would lead you back the way you came suddenly deposits you somewhere much creepier, or that there have been clues to the puzzle you've been agonizing over right under your nose all along. 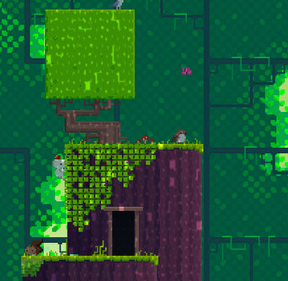 Navigation is, at first, sort of overwhelming. Keeping track of it all seems impossible, and even if you know where you're going, Gomez's every movement starts to feel slow enough that backtracking any significant distance can become a chore. Think Lester the Unlikely, pre-invigorating smooch, but cute and whimsical enough that it's hard to really be mad at him. Jumping can also feel fiddly, with the difference between landing safely on your target and plummeting off into eternity a barely discernible step or two. Admittedly, there's no real menace to make you feel pressed for time or to watch your step, since even blowing yourself up or getting sucked out of reality will pop you right back to where you were a moment later. This might not provide enough challenge for some players, especially since most obstacles and puzzles are simply overcome by rotating your screen until you spot the way through.

Thus, Fez is not a game for the impatient, or those of us who demand a whole lot of action. Instead, it's a game for players who want to remember what it feels like to explore something bigger than themselves, that delight you get from unexpected discovery. The game is, unfortunately as of this writing, a little buggy on first release, and an eventual Mac release is still somewhere in the foggy, unspecified future. Still, these are issues that will be addressed, and as a whole Fez is still well worth experiencing. Its world design is gorgeous, packed with details large and small, and a rich atmosphere that sucks you in. If you love the thrill of discovering new areas and taking in new scenery, not to mention the satisfaction of hunting everything you need for 100% completion, this is definitely one to throw yourself into. Especially since I have it on very good authority that fezzes are cool.

Fezzes are cool, and so are super detailed pixel graphics.

I've been counting down the days for YEARS for this to be released for computers!!

"This might not provide enough challenge for some players, especially since most obstacles and puzzles are simply overcome by rotating your screen until you spot the way through."

I wouldn't say that. True, the early puzzles are pretty easy, but trying to get 100% completion is nigh impossible without some heavy-duty logic, or a wiki.

Working through the "Tetris line" puzzles, is very tough, including two separate locations on the map for clues on how to pass it. And figuring out the text in-game is nothing short of a monumental effort, requiring knowledge (and identification of) an old IRL axiom to serve as the key. And some of the block puzzles that are downright arcane.

I would say about 50% of the puzzles are easy, with another 30% requiring a good bit of logic. 10% of the remaining will stress the limits of the player, and the last 10% will drive them insane.

This game is really neat, but it has some Windows graphics support problems with Intel HD Graphics. This page has good info on what to do.