What are you looking for in your adventure hybrid game? Thrills? Laughs? Being immersed so deeply in entertainment that, when the show is over, you hardly know where the time went? Fugazo's wonderfully campy Film Fatale: Lights, Camera, Madness! dishes out all of that and more from the opening scenes through the last words of the credits. It's just a shame you won't have a ticket stub to pack away in your scrap book. 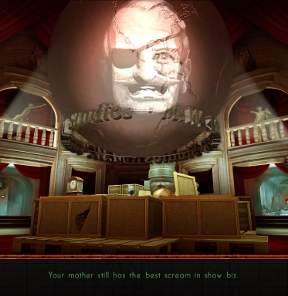 As the lights dim and the film begins to roll, the background story is quickly laid out. Your mum, Rita Ray, beloved royalty of the silver screen, has been kidnapped and is being held captive by M.W. Vernon, the legendary director and owner of a once great movie studio. Just what Vernon wants from Rita is not yet fully explained, but a dread feeling of foreboding, agitated by the madman's echoing "Bwahahaha!" has the hairs on the back of your arms standing on end. This cannot be good. Each corner you turn slowly reveals Vernon's plans and, right when you think it's over, another twist delivers a climatic ending worthy of—well, if not Hitchcock, at least better than any B-movie producer could ever hope for.

Gameplay is fairly evenly divided between adventuring and puzzle-solving using the standard point-and-click method of navigation. A changing cursor will indicate areas to investigate, puzzles, hidden object searches and items to pick-up as well as showing when you can move on to another room. As you explore the lurid scenes of a violence and insanity run amok through eclectic compartments of a fully-equipped movie studio, your progress is barely halted for brief moments of mini-games or hidden object searches to collect useful props and tools. 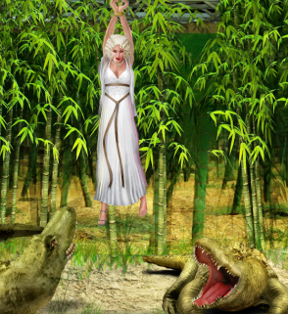 If you've ever taken a tour of one, you know movie studios are big and full of rooms. Between the back lots, special effects stages, working sets and main buildings, there is a lot to be seen. Usually places like this will put you in touring trams operated by loquacious, knowledgeable actor-hopefuls in order to spare your bunions. Seeing as the crazy director managed to drive off (or, perhaps, murder) all his staff, the next best thing is an accoutrement found early on that makes leaping to the next destination as easy as a mouse click.

Analysis: What's not to love about a game that actually has "Muwahahahahaha!" as a line of dialogue? Fuzago pulls out every trick in the showman's book— such as pitch perfect voice acting (which can be muted if you prefer), detail-orientated scenery, a story replete with plot-twists and amusing dialogue—to guarantee your complete entertainment. Here is a game to lose yourself completely in the moment. If ever there was a time searching through an assortment of wild objects, grappling to repair broken equipment or solving cryptic codes would be appropriate, it's when you're on a large movie-lot-turned-gauntlet pitting your wits against a deranged "architect of the mind." The mini-games manage to put a unique spin on otherwise familiar puzzles; a few are initially confusing to figure out yet the hint function will explain succinctly. Another great feature is a map that shows, and lets you skip to, the next area of interest. This speeds things along, keeping the action flowing, although it also shortens the overall play time. 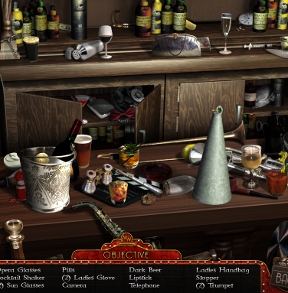 Film Fatale has another convenience you'll appreciate: a selective hint function during search scenes that lets you select exactly which item to reveal. Although hidden object scenes are about as typical as it gets in terms of how they're done, they're made enjoyable through crisp photo-realistic graphics and a cinematographer's talent for composing displays. Expect to see any object imaginable if it will serve as a movie prop; yet scenes are still well-organized, sorted by theme to suit each setting. Non-fans of the genre won't be wooed by these searches but at least they're not unpleasant, especially when driven by the compulsion to see what that fruitcake Vernon will do next.

It's not much longer to play Film Fatale: Lights, Camera, Madness! than it is to watch a feature-length blockbuster. Yet for less than the price of a movie ticket, you'll get an experience that is far more immersing, fulfilling and loaded of fun. You'll be toyed with by a maniacal lunatic, but at least you won't have to put up with popcorn down your shirt or the cell phone lights of rude fellow moviegoers.

Task: Find a way inside the studio and find Mum

Task: Turn the lights on...

Task: Save Mum from M.W. Vernon

Task: Obtain, then develop, the film strip trapped under the Statue of Liberty.

Task: Find a way to illuminate the developed film strip

Task: Activate the crane to reach the crocodile pit

Task: Solve the laser lock to free Mum from her dressing room.

Task: Access the set for the film's climax and rescue Mum

Task: Escape Vernon Island before it falls into the sea!

Task: Find a way inside the studio and find Mum

Task: Turn the lights on...

Task: Save Mum from M.W. Vernon

Task: Obtain, then develop, the film strip trapped under the Statue of Liberty.

Task: Find a way to illuminate the developed film strip

Task: Activate the crane to reach the crocodile pit

Task: Solve the laser lock to free Mum from her dressing room.

Task: Access the set for the film's climax and rescue Mum

Task: Escape Vernon Island before it falls into the sea!