Fireboy and Watergirl 3: The Ice Temple 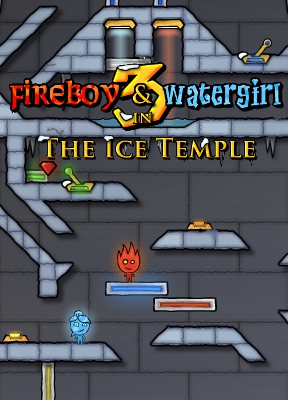 If you haven't played the series before, you'll want to start with the two beginners tutorial levels, which will explain the basics. Use [WASD] for Watergirl, and [arrow] keys for Fireboy. Some elements, such as light rays and angled mirrors, are carry overs from previous installments and are explained in these tutorial levels. For those familiar with the series, there is an ice tutorial to explain the new hazards. Ice slows down Watergirl and speeds up Fireboy, but Watergirl can go up icy slopes while Fireboy cannot, and neither can jump on icy surfaces.

The overall goal of getting Fireboy and Watergirl to exit together through their marked doors remains the same, as does the importance of grabbing the red and blue gems wherever you can, and of course, you'll want to do it as fast as possible. The number of gems you grab and how fast you do it combines to give you your score. Even if you're not ambidextrous, most of the levels can be completed playing one character at a time, although naturally that way is slower. You can also make this game into an unofficial local multiplayer game if you can get a friend to control one half of the keyboard. Laptops with external keyboards plugged into them work especially well for playing as a team; one person takes the laptop keyboard, the other the external one. Not that I have any reason to know that. Ahem.

Play all the Fireboy and Watergirl games:

The fact is that even if you do cheat use out-of-the-box thinking, the puzzles are a fiendish challenge all their own. Some levels require careful planning, others precise timing, still others adroit platforming skills; many, especially in the later levels, require all three. But the game's snowflake-shaped level select menu grants the player access to many different levels quickly, which allows you to try various levels any time you find yourself getting stuck or frustrated. Fireboy and Watergirl 3: Ice Temple is as much of a gem as the ones you collect in it.

I wish more designers used the snowflake level design. Even though this game has levels that make me ragequit repeatedly, I keep coming back because I can try other levels until I regain my composure.

This looks like it would be a great game, if I used a QWERTY keyboard.

How about a settings page?...

This game is so fun and addicting!
But there is on level that is reeeeaaaaalllly immpossible. It really is. There is no way to get past this one part.
There is the ice tutorial and then you go straight up three of those diamond thingies. Has anyone ever completed that level, or know somewhere that can tell me how to complete it? That is, like, the only level i have not passed with an A.

Great game, excellent puzzles. Do you have any new levels planned? Maybe a lava temple?? :)

4,195 Views
0 Comments
chrpa— Jayisgames needs your help to continue providing quality content. Click for details Welcome to the Roundup 44 with three games! As mentioned in the previous roundups, only odd-numbered episodes are featured since even-numbered are for Robin Vencel's patrons. More...  ...

Cursed Travels: Below the Factory

1,725 Views
1 Comment
chrpa— Jayisgames needs your help to continue providing quality content. Click for details After investigator Roberts and his companion Atzalar together with professor Fargleton successfully got rid of an ancient fearsome demon, Farold Roberts with Atzalar go to the abandoned factory...  ...

444 Views
0 Comments
jayisgames.com— Who doesn't enjoy gaming? Especially online gaming. It is a great way to unwind after a long day and transport yourself to a different world. There is a wide variety of games you could enjoy but irrespective of what kind...  ...