Some games are an ordeal to play, and Scott Cawthon's indie horror action/puzzle/why-would-you-make-something-like-this hybrid Five Nights at Freddy's definitely fits the bill. It was a runaway success, themed around a very unfortunate security guard struggling to keep some very creepy and very deadly animatronics at bay over the course of five nights using dwindling power, light switches, and a pair of doors... and, one would hope, a massive paycheck and benefits to compensate. It's a simple game, but its emphasis on a staggering amount of relentless jump scares earned it a devoted and probably mildly unhinged following, and while the developer was actively soliciting feedback for a beefier sequel, the sudden release of Five Nights at Freddy's 2 (Android version available, iOS on the way) mere months after the original still comes as a surprise. With more animatronics, substantially harder difficulty, and new gameplay mechanics, you'll need quick reflexes and nerves of steel to survive... but how much of a sequel is it really? 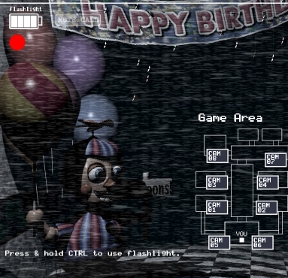 The basic premise of Five Nights at Freddy's 2 is still intact. Your job is to survive from midnight to six in the morning by keeping the animatronics at bay, who are really, really interested in getting to see you up close and personal. Unlike the original, however, you have no doors to close, and while the building has a limitless supply of power, your brand new flashlight, which will illuminate the dark hallway directly in front of you, does not. To your left and right are vents big enough for something to crawl through, because why not, and the light switches above them will temporarily illuminate that area. As before, most of your time is going to be spent switching between security cameras and keeping tabs on where every animatronic is, but with significantly more rooms this time around, that's even harder than before. Unfortunately, Five Nights at Freddy's 2 still lacks some of the same basic functionality that its predecessor also did, such as any way to change resolutions or pause your game, though pressing [ALT] and [ENTER] will at least make the game play windowed. 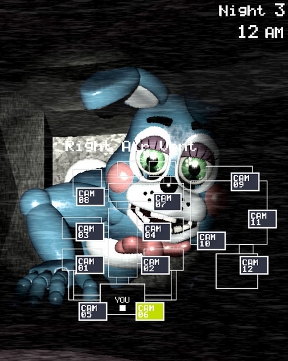 Your only other "weapon", as it happens, is a discarded Freddy Fazbear mask which you can put on that theoretically will make any animatronics who are getting too close to leave you alone... though if they're already in the office, all bets are off, and not all animatronics will be fooled. While "classic" Freddy, Chica and the others make a reappearance alongside newer models (with Chica now sporting panties and a more feminine figure for some reason), Five Nights at Freddy's 2 has changed their behaviours in addition to serving up other dangers. Balloon Boy may look innocent, but if he gets close his giggling can lure others right to you, in addition to disabling your light sources. The Puppet needs to be kept placated by making sure the music box in the Prize Corner is wound up, and, well, suffice it to say you'll have your hands full of all of the others. You may even get a surprise if you die... hahaha, if.

If you've played the original (which may actually be the most recent in terms of plot continuity), one of the things you'll probably notice is that the sequel feels harder from the get-go. It's not just that you have a whopping ten animatronics to keep track of and different mechanics, though admittedly a lot of the challenge comes from re-learning all the new "rules" and behaviours, it's that your cuddly and curious friends are much more active, and as the nights wear on, survival depends on fast reflexes and even a bit of luck. The sequel expands the mythology surrounding the game considerably, though mostly through hints, things you can spot in your surroundings, and implication than anything directly stated. It's still less a drastically different and bigger sequel than it is a game that makes it feel like the original was a prototype. Five Nights at Freddy's 2 is a lot more fleshed out and feels much more complete and cohesive, even if it also doesn't feel that different, which is always a tricky line to walk when making a sequel to any game. As a result, the usual qualifier of "if you liked the first game, you'll like this one" holds true, but at the same time, you might also feel that it might not do enough mere months after the release of the first game to make you want to dive back in, so trying the demo is a good idea. Regardless, Five Nights at Freddy's 2 was clearly made with the fans in mind, an effort to expand on the gameplay they loved without losing what they loved, and even adding on a little extra. At the very least, it's worth checking out... hey, I hear they do birthday parties! Your kids are sure to love them.

Android:
Get Five Nights at Freddy's 2

One thing that's bothered me is how little you actually use the cameras on the higher levels once you get a feel for the game. In FNAF 1 you only used it for stalling Foxy, and here you only use it for winding the music box. The cameras are such a nice creepy gimmick on the lower difficulty nights, but they just slow you down on the tougher nights.

I'm thinking, game 3 might have every door in the place closable, but not all at once... so it becomes a game of redirecting them away from you, by checking on their positions?

and it seems the cameras have became the focus of the third! the sole animatronic is only able to be stopped by luring it with audio in adjacent rooms, making you have to frantically search for where he is. and the camera quality isn't the best, nor does it help how the animatronic likes to hide off to the side instead of in the spotlight of the cameras.

apologies for double commenting, but a door closing mechanic is also part of the third game as well! there are vents throughout the building, which the animatronic can go through. these vents are ways for it to get to you much quicker, such as how on the other side of the map there's a vent that goes directly into your office, and the animatronic seems to start near it. as far as i can see, they all seem to be able to be closed at the same time.