Mobile devices have long been home to quick arcade games built around mechanics so simple you practically know how to play before even downloading the thing. Mastering those mechanics is where the fun is at, and games from Doodle Jump to Angry Birds have carved out ample space for themselves building on these core ideas. 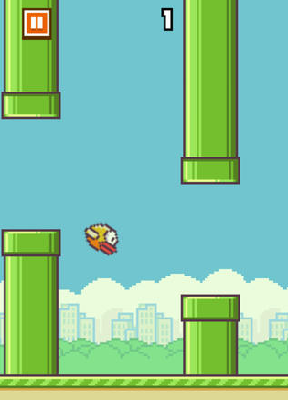 Enter Flappy Bird, a super simple avoidance arcade game that has suddenly exploded in popularity on both Android and iOS devices. A cute pixel bird flaps its wings as you touch the screen, moving higher with each tap. Pipes with randomly generated gaps scroll by, and all you have to do is keep the flappy bird away from anything solid.

The intense difficulty is one of the things that makes Flappy Bird so captivating. It's not easy passing even one pipe gap, let alone a handful in a row. There are no power-ups, mini-games or other diversions to keep you distracted, it's just pure, raw, intense tapping. Play until you get the timing right, then keep playing to beat the high scores. The slightest collision ends your game, so be careful, and try not to throw your phone in frustration.

The trick to mastering Flappy Bird is to come up with a good rhythm. The bird has a lead belly and sinks faster than you expect, cutting reaction times to their minimum. Stay calm and keep the rhythm going. Don't focus on the pipes, just keep your eyes on the bird and don't deviate from your tapping pattern. Another strategy is to stay high, drop when a pipe comes near and rapidly tap to ascend through the gap. Cheats and hacks aren't worth it, just stick to the plan and you'll get double digit scores in no time.

My only complaint with the game is the waiting period between two runs. Super Hexagon has a one-tap restart, which keeps the action going after a game over. Flappy Bird should have something similar to this. Currently the tap to restart followed by another tap takes too long, especially since runs last ~1 minute.

The gameplay is simple, but addictive. At first it was a little difficult, but then it became more of a game of consistency once the correct timing was found. Hopefully the developers expand on the game with different obstacles or speeds.

3,365 Views
6 Comments
chrpa— Jayisgames needs your help to continue providing quality content. Click for details After a tiring long day - it's not fun to raise five kids - Mother Mouse finally put her offsprings to bed and left the room for...  ...

How to Max Reputation in WoW TBC Classic

1,312 Views
0 Comments
jayisgames.com— Don't we all just want to be admired in the eyes of the public? So do your characters in WoW TBC Classic. They just want to be heroes and live a lavish life, is that too much to ask...  ...

2,191 Views
0 Comments
chrpa— Jayisgames needs your help to continue providing quality content. Click for details Welcome to Weekday Puzzle! Kultisti is back in a short time indeed - this time you need to help to his skeleton magician. Toombler's puzzler plays with...  ...

3,453 Views
13 Comments
chrpa— Jayisgames needs your help to continue providing quality content. Click for details Hi! It's Wednesday with a new Weekday Escape! This week's games are a combination of old and new ones. Summers are traditionally poor on new escapes, and...  ...