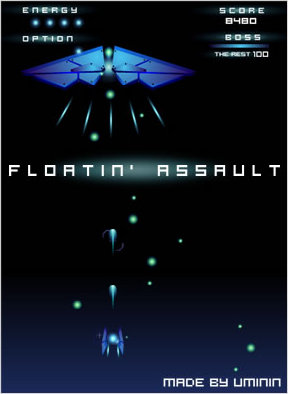 Uminin strikes once more with this gorgeous Flash shmup from his Flash Game Zone website, titled: Floatin' Assault. Well, that's not exactly the way he spells it, and yet I am sure that is what he means. =)

Floatin' Assault offers two different fighter types to choose from: Heavy and Standard. The Heavy ship type is powerful but a bit slow to react, while the Standard type is quick though a bit weaker on the attack. Heavy features an auto-firing special attack with similar attack power; Standard has a manual special attack with homing-type fire power. Both fighters have a force field of limited duration for protection.

Force fields and special attacks each consume one (1) option unit when activated. You start the game with three (3) options, and gain an extra option for each 10,000 points. Each hit taken without an active force field reduces your energy by one (1). You start the game with five (5) energy units. Additional life energy power-ups are released when beating certain enemies at various points within the game.

Fighter control is with the mouse. Press [Z] to fire, [X] for force field, and [C] for special attack.

The game is a fairly ordinary space shooter with some very pretty Flash graphics and an excellent soundtrack. The choice between two very different fighter ships provides the player multiple strategies with which to play. The game engine moves things along quickly and keeps the pace frantic. Although the game is only three stages in length, the difficulty level will be challenging enough for many to have fun with this game for a long time. Click.

has anyone beaten the 3rd boss yet?
thats as far as i got

Which is your favorite ship?

what the?!?!?! my ship disappeared and the game is still going but i cant shoot and i have 4 life left!

My only complaint with this game is the controls, I would have had the arrow keys to move instead of the mouse.

I beat the 2nd boss with standard, but only just barely made it past the first with heavy. Fun game.