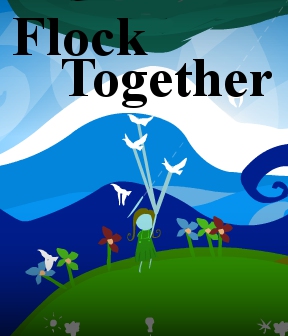 Flock Together is the latest game from John Cooney (jmtb02). It tells the story of a little girl whose pet sheep, somehow, gets tied to a balloon and floats toward the sky. Your job is to follow after it by tethering yourself to different birds. You start off with only three ropes tied to one weak dove, but it won't be long until you'll be soaring. Flock Together is not a complex game, nor is it long, challenging or expansive. What it is, is soothing, cute and fun. It perfectly fits the term "casual gameplay."

To tether more birds just click on the one you want when its within range, and to move around you can use either the [arrow] keys or [WASD]. Since three birds won't be enough to reach the great heights your sheep has floated to, you'll need to get some more rope. Luckily, a hot air balloon piloting rabbit is buying birds and selling ropes. Stronger birds will fetch more money, but even birds of the same type are not created equal. Each species has two stats: one for how fast they fly and the other for how high. Out in the wild blue yonder are wild and rare birds, identified by the stars around them, and they'll sell for more cash with their higher stats.

The art style is well done, though the higher up you go the less there is to look at. It's a shame because the islands at the bottom have their own simple charm.The birds aren't equally simple, but they fit with the game's whimsical style. The sound is absolutely fantastic; the music may be repetitive, but it's so calming and unintrusive that you'll barely notice, especially combined with the soft sound of the waves. All these elements combine to create something that's like interactive, goal-based white noise.

There is something nice about roping a bunch of birds and just cruising the skies, watching the ropes stretch out and seeing your little girl trailing behind like some strange kite where you aren't sure who's in control. If you're looking for an in-depth game that'll burn away hours, this won't hit the mark. If you've had a frustrating day and want a game that'll calm you like warm milk, Flock Together is perfect. It's simple fun wrapped in a beautiful package. What's more, it finally vindicates the majestic albatross, which has gotten a bad rap ever since Samuel Tyler Coleridge's smear campaign.

A cute little game.
I only caught one double-rare bird, a hawk.
Love those albatrosses (albatri?), though.

Hawks make you go fast, but they don't have quite the lift power of albatrosses.

But it's SO much FUN to go tearing after slower birds with 10 hawks leashed to you!

Game keeps crashing on me. IE8, flash updated. Full disclosure: I had to turn Gunbot down to low quality, which I've never had to do with a flash game before. My other graphics programs work fine, but Flash apparently hates my computer.

I love quick little exploration games (when I see that tag in my RSS feed I get myself into a tizzy). I just breezed through it and didn't spend much time catching and selling. I beat the game easily with 8 ropes, and in the end didn't even use them all when I reached 100ft.

My only gripe was that the play screen was a little too small. When I hooked about 5 albatroos it started to get very hard to see the rest of the screen and rope anything else.

Agreed, full screen would of made this game.
Really enjoyed it anyway - nice ambience as well as loads of fun.

Anyone else notice the extra special dove? Lift of 6 and speed of 30

I was a little miffed that once I clicked on something the instructions disappeared.

At some point I managed to pause the game (no idea what I did to do that) and was unable to resume. I was only able to quit to the Main Menu and restart.

As far as gameplay goes, it was indeed relaxing but a few things (like bird size relative to the viewable area) could be better.

Well, at least it's not one of those demeaning stories about a girl using her boobies to rise in the world.

@neo1973
Try Chrome. It really does do sooooo much better than Firefox with Flash content, and it almost certain whoops IE too.

@kanga you proberly hit "menu" on top of the screen

the game goes on pause then, if you hit that button again you unpause the game again.

futhermore, great game, but if you have to many birds on , it's difficult to catch a new one ..

maybe what is told before , full screen !

Nice but it started slowing down for me. I hit q and it then zoomed out to show half the world.

Anyone else get this?

I felt like I was overly myopic the whole time, could have benefited from a bit more zoomed out playing field. spent most of my time zipping by birds and way over shooting even if I reacted as soon as I saw them.

I also managed to buy up all the ropes far too quickly, there was no accomplishment motivation to hunt down rares to rack up money. Cute idea, but not as fun as it could have been.

Also, how does a sheep tied to a single balloon out perform a girl tied to a flock of albatross?

Its possible to get the sheep in 3 ropes

With skilled catching, you can rope yourself 3 shining blue jays, then 3 shining cardinals, then 3 shining crows, then hawks, and then you can get 3 regular albatroses and then simply fly up to the 100 ft required. albatroses take you 35 ft each, so 3 would actually take you 105. It took me like, half an hour to, but I was able to do it with only 3 ropes. I admit, a lot of luck is required to get the right birds at the right hight and to be ready for them to pass.

So is it true that

If your ropes aren't all filled, you can't get up to 100 feet, no matter how big your birds are?

I spent a while stalled out at 98 feet with several albatrosses and was very confused.

Is there a formula for how high you can actually go with a given set of birds? It doesn't seem to be the sum of their height ratings.

Waggles, how did you get that to work? I ended up with 3 (normal 1-star) albatrosses after trying for a while, and couldn't make it.

Nice art style and, like the review said, the music is great. But this is a terrible aspect ratio for a game that relies so heavily on vertical space. Especially when your character's floating all over the game screen. I never had any idea what I was catching, and had to decide at one point to just not care because otherwise I'd start getting frustrated...which I imagine is sort of the opposite of the game's goal.

this is the best game i have ever played and the sound was fantastic. i loved the diversity of the birds, and how you had to gather just the right birds to reach the needed hight. athough the idea of a sheep floating 100feet into the sky on 1 ballon is a bit strang, just the idea of a floating sheep is CRAZY.

Over all this is probally the most AWESOME game i have ever played, i hope others agree.

Didn't like this game - earned a ridiculous amount of money, collecting albatrosses for around an hour before searching online for the actual aim of the game, which was not made clear. On the map, how are you to know where the sheep is? Not challenging - end is anticlimactic.

i found a pelican. they are only found at the bottom of the screen and are faster and go higher than doves. also, they are easy to catch

I found a glitch- press Q to see the full map. Press E to return to normal. If you get stuck in Mr. Rabbit's emporium on the big map, there is a small, normal map in the top-left corner. Press leave on the small map, then press E.