Puzzle games, especially those of the logic variety, always seem to default to using numbers to provide challenge. But what if you don't like numbers? What if you spend your days scrawling anti-mathematical propaganda on walls as you fight Big Brother's oppressive numerical order? If that sounds like you, we first of all would like to salute you for living in a dystopian sci-fi novel. Then we'd like to show you FlowDoku, a free sudoku game by HapaFive for mobile devices that uses shapes instead of numbers. 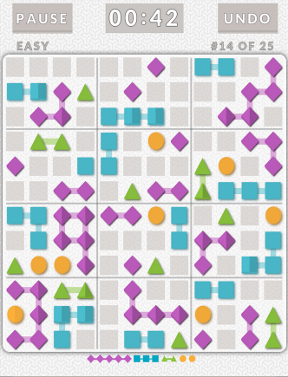 FlowDoku plays just about like your standard sudoku variety. You are presented a grid of empty spaces, some of which are filled with squares, triangles, circles, and maybe more! Tap any cell to place a square, tap a gain for a triangle, and tap yet again for a circle. Each row, column and sub-section of the grid can only contain a certain number of instances of each shape, as outlined by the key at the bottom of the screen. Using logic, it's your job to fill the grid... for great justice!

FlowDoku's deviation from standard sudoku is that shapes must be grouped together in their little sub-zones. Squares and triangles like to be adjacent to each other, while circles couldn't care less. This adds an extra layer of logic to the experience, making puzzles solvable without introducing those wretched numbers.

FlowDoku looks smart and has a flawless interface that never gets in your way. The free download contains 250 free puzzles across five levels of difficulty, with some moderate in-app purchases to unlock more levels.