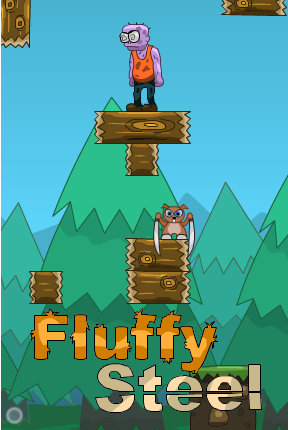 Fluffy Steel may sound like a contradiction in terms, but what other way is there to describe a flying squirrel adorably dual-wielding machetes? And in this Road Blocks-style puzzler by Mibix, said squirrel faces off against the natural predator of all rodentia: zombies... Okay, maybe not the natural predator, but one can't blame woodland creatures for approaching the scourge of the undead in the best way they see fit.

Use the [arrow] keys to direct the squirrel to fly in various directions. The squirrel will continued flying until it hits a barrier, killing all zombies it crosses along the way. Once all zombies are killed in a level, the exit portal will open. Note the different types of zombies: you'll bounce off the heads of ones with helmets protecting their noggin, ones with spiked backs will kill you if you attack from that side, and so forth. Avoid flying off the edge of the screen or smashing into floating spiked balls, and be wary of teleporters and the yellow bounce pads that will send you careening in the opposite direction. Though the cartoony graphics might make it look like some kind of physics launch game, rather than Orbox Lite, overall, Fluffy Steel is a simple but challenging set of forty levels with a nice difficulty curve. At the very least, you should check it out to hear the scream the squirrel makes as he flies off the screen. Call me demented, but that clip is schadenfreudely delicious.

Cool game. One of the things I like best about it was the fact that there are no timers or click counters to deal with. Just solve the puzzles. True casual gaming.

I love this game! Mostly not too hard (yet). I like it that everything moves FAST. The two kinds of portals make it very clever.

Nice puzzle game--exactly what I was looking for this morning, and I really just stumbled on it. That's what I love about JiG...a game you might pass up because of a title or artistic style can turn out to be just what you want to play.

Thank you! And while a thousand complaints for featuring a game that's allegedly too simple or too cute can get you down one comment like yours reminds me why I like writing for this site.