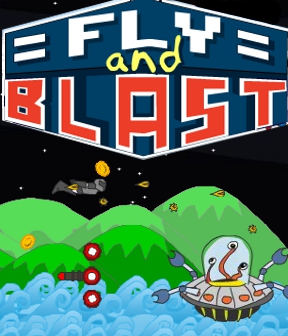 Sometimes we're put in situations where we're offered several choices but one is clearly correct. The red pill or blue pill? Well, the red pill of course, everyone wants to be able to do kung fu. JayIsGames or (insert other casual gaming site)? JIG for life, duh. Adobo Games and Kotubuki Media's new side-scrolling shooter Fly and Blast asks you to choose between piloting a jet, a helicopter and a super-powered heavily armed flying exoskeleton within minutes of loading the game. You can guess which one your reviewer picked.

When you invariably choose the battle suit (or the jet or helicopter, I suppose, but really now), you'll find it's easy to control. Use the mouse to steer, left-click to fire your main weapons, the [1] and [2] keys to fire your secondary weapons and the [spacebar] to fire your emergency weapons. The main difference between the various ship options, aside from their handling and durability, is their choice of emergency weapon. The jet gets a screen-clearing shrapnel storm, the helicopter summons several allied jets to fire on foes and the battle suit unleashes a powerful but low-spread sonic wave blast.

Between levels you can use coins collected from destroyed enemies to purchase upgrades. Most of these are additions to your main weapon, eventually turning you into a screen-clearing hailstorm of destruction; in other words, buy all the weapons you want, because rather than replacing each other, they stack. There are also several secondary weapon options which mostly clear the screen along with a health refill and an extremely useful magnet that draws in coins from further away. 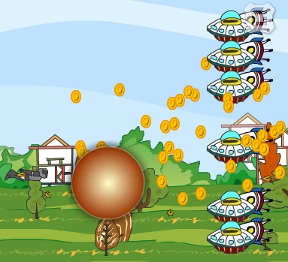 Analysis: Fly and Blast is a solid shoot-em-up, though some might call it too easy. Your foes aren't very aggressive and your reviewer found that the majority of the time he'd be hit due to his coin-grabbing greed rather than difficulty in dodging enemy fire. When you've played through a level or two and gotten some upgrades, the enemies might not even get a chance to shoot at you before you vaporize them. All of this is portrayed using an adorable and endearing paper cut-out style. Your alien foes are cute rather than menacing and everything is bright and colorful. Fly and Blast also avoids one of the main pitfalls that this sort of game tends to encounter by ensuring that enemy bullets stand out against the background.

The other issue with the game is the lack of an obvious hitbox definition. While the area where your character can actually take damage or grab coins pre-magnet appears to be the same on all three ships, there's not really any way to see this for yourself. A different colored area displaying your hitbox would have been a big help, especially since the game lacks more precise keyboard controls.

Otherwise, the upgrade system keeps the game fresh and there's enough alien-blasting, coin-grabbing action for any shooter fan. Give Fly and Blast a shot if you enjoy flying or blasting. Just don't be surprised when you find yourself drawn to the battle suit. Inside every otherwise sane gamer, there's a mech warriors screwing to get out and blow everything up.

I can't get it to load. It goes through a 'FOG' loading screen, and then after clicking continue, it goes to a white screen with a button in the upper right corner which opens up some 'top rated games' list or other.
Using Firefox 3.6, AdBlock on or off makes no difference.

Me thinks it's got something to do with F.O.G not being there..

Fixed now. Sorry about that. I'm not sure what happened.

"Fly and Blast also avoids one of the main pitfalls that this sort of game tends to encounter by ensuring that enemy bullets stand out against the background."

I completely disagree with this. Since the background is cluttered and everything is drawn in the same bright-colored-black-outlines style, I found it very difficult to keep sight of my character and the enemies. Everything just blurred together.

Needs a keyboard control option. Hard to get the precision this game demands with a mouse. I guess today's game designers weren't alive during the SNES era, let alone the NES era, so they always put mouse control on everything. NO! Bad designer. No donut-shaped achievement for you!

And the upgrades? ZEY DO NUHSSING! When my max-upgraded ship can't destroy any enemies with a single shot, something's wrong. It's like all the guns you buy don't give you more powerful bullets, they just give you more of them. I can't get past "Luna" with any of the characters.

Oh yeah, and the MAIN reason I can't get past Luna? The homing "missiles." These are certainly not rocket weapons; they have no inertia. It's hard to deal with missiles that a) require multiple bullets to knock down b) can turn on a dime (maybe it's a gravitic drive?) and c) there are half a dozen other enemies on the screen, all of who require multiple blasts from heavy artillery to destroy.

For a good implementation of homing missiles, see the recent "Not Your War" game. I'm not saying your physics has to be perfect, but you should always have the fun of the gaming experience in mind, and this one of those things that just makes it too hard to be fun.

reminds me while making something with Kongregate's shootorials several years ago..... Nice for wasting time, but not really a good score shmup!

The screen does get a little too busy after a while. But this is the perfect game for when someone from the sales team calls, and they don't realize the conversation was over five minutes ago, and they're yapping on and on about some account or other, and you can just stay on the phone and go "uh...yeah...yeah..." (poom! papapapapow! vwooooosh!)"right...riiiiight...yeah, I see what you mean" (pyew!pyew!)

Pretty much perfect for that.

Um I think the game is great and all, actually just what I want right now, but I cant get any secondary armaments or whatever, It says drag and drop but that dosent work, so I buy them but then when I play they arnt there.

Upgrade system seems so short as to be pointless. I found I had all the main weapons and the 2 best (read: most expensive) secondaries within a few levels.