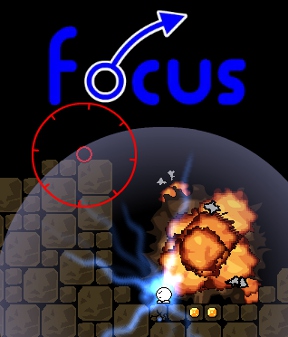 Trapped in a cave. Laser things shooting at you. Buttons everywhere. Spikes even more everywhere. It's a normal day for our featureless friend in Focus, a puzzle platform game originally released in 2009 by Karoshi author Jesse Venbrux. Ported to the browser world by Joseph Ivie, Focus features over 50 levels of extra difficult action, sticking you in enclosed rooms with all manner of dangers and challenging you to use your platforming skills to make it out alive.

Focus is built around a standard platform base where you walk and jump around a series of single-screen levels. Each room has a door, and each door can only be opened if you trigger the yellow switches planted in the walls, floor and ceiling. Sometimes you can just step on a button, but other times you'll need to trick a robot to fire at you in order to toggle it. Standard fare, and challenging of its own accord, but then you introduce the game's main gimmick: the focus ability.

Tap the [A] key to start the focus. A ring appears around you along with a fancy pointer you can move with the [arrow] keys. Choose your destination, minding both distance and direction, then release to fling yourself around. Not only can you travel great distances almost instantaneously, you can also jump through solid walls, making focus both extraordinarily useful and an awesome trick to show off at parties.

Learning to use focus will take some time, but once you do, you'll be hopping around the game like a boss. There are plenty of challenges ahead of you, almost none of which can be completed without concentration and some trial-and-error. Focus is very friendly to failure, though, and when you start scratching the surface of the game, you'll realize just how intricate and entertaining one simple ability can be.

I think you've covered this game in a weekend download a while ago, right?

Either way, i've had the game for quite some time and I LOVE it.

This game is amazingly fun!
It took me hours to beat the insane difficulty, but when I did, it was worth it :D

Once they introduce rockets that are so fast that even focusing doesn't effectively slow them down, the game rapidly loses its appeal.

Insanely fun game, but it get ridiculously hard

Man I love this game. I remember playing it when it was downloadable. I think the main thing that makes this game great is how it makes you feel like you're some sort of sci-fi action hero.

Insane mode is impossible O.o
What's the ending for beating it?

Original mode is much much harder than insane
as insane mode lack those shapenel rockets.

I'm glad they don't have fastest rockets loaded with sharpenel

Ending of insane is similar to new/easy. Only the ending in Original have some more substance in it (i.e. showing all missle ships wreckage)

I found a hidden passage that only appears in focus mode (and only if your focus circle actually covers the block). But when I went through, there was just a blue block. Hitting it revealed a room of spikes and missiles with no yellow targets. All I could do is go back the other way.

Are there other blue switches that I missed, and does something special happen if you hit them all?

It started out fun, but then the difficulty got so high that the "clever" little death messages became INCREDIBLY annoying. It's fine if you want to make the game hard, but having to read those STUPID, obnoxious messages dozens of times is just wrong.

For that, the game gets one star from me. It would be much better if the developer wasn't trying to be so cutesy.

I think I've found a bug: somehow, after entering a room, I lost the ability to focus. Dying doesn't seem to fix it. It was the first room with the fast missiles turret.

Actually atomic, I think the creator has issues considering the games he makes.

I found a glich while playing this game. In one of the the rooms with the rocket launching spaceship things, I started falling through the ground. I even killed myself but it kept making me fall through the ground. So it kept going and at i think was the last room, after i fell through, the screen turned black and it got stuck.

If you haven't noticed, each time you collect a blue gem, your focus circle increases in size, making the blue gem a reward in itself. I believe there are 2 or 3 three more including one

in a room one screen to the right of the very first blue gem. The actual passage to get there is not hidden, but getting up there in the first place can be a bit of a challenge.

I'm also pretty sure that these are found only in the "New" difficulty.

One of the later levels was just silly. Two super-fast turrets, four targets, no cover, and not nearly focus to get to all of them and then escape. And you can't jump over the missiles like Secret suggested, because the turrets are above you and you'll just jump into them. Plus, once you start focusing, the timing just gets totally screwed up.

I enjoyed "new" mode a lot. Once the superfast turrets come out and stayed out in "original" mode, I lost interest. I made it past one superfast, and past three, but then the room with two killed my interest. Ah well.

I also found what spaceloaf found, and didn't realise that was what the blue gems were doing.

I found a bizarre glitch is classic mode.... After dying a couple thousand times in the room with the three insanely fast missiles and yellow switches on either side of the room, I somehow focused past the left wall and fell downward through the rest of the levels. I eventually ended up in a black screen with the music still playing, and that's all that loads now when I refresh the page. Weird stuff.

Please, someone help me I cannot complete Original. What do I have to do?

[I think you're going to have to provide a few more details about where you're stuck to get someone to help you. -Jay]

So, I'm sure I'm missing something really freaking obvious, but how to I get past the laser? I've tried focusing into the red circle-thing in the middle, but that doesn't work. I've been able to hit the two buttons to open the exit, but I can't get past the freaking laser. What am I missing?!

Liv, focus on the other side of the laser, not on the laser itself.

How many levels are there on "Original' mode? Also, how do I know in which one I'm in?

there is no yellow switch in the room and there is a secret room to the right, but also it doesn't contain anything!

Level 32 is the last "real" level of the Original Pack, so be happy that your almost there. How I beat it was I just used focus to jump around the level as long as I could without dying. Eventually, I got it.

Whenever i press the up or down arrows, the page scrolls in the direction i press. How do i stop this?

[This is a known bug with IE. Use a different browser. -Jay]

I'm actually stuck trying to get through 2,31.

There is a secret room in original mode! It's a few screens after 2,32. in 4,35. It's on the left wall. -catsfanj on Kongregate

1 Views
0 Comments
jayisgames.com— Are you looking for some fun and educational games for yourself or your students or children? Whomever the reason is, the game sites we have put together are five of the best out there. These websites do not only have...  ...

6,506 Views
8 Comments
chrpa— Jayisgames needs your help to continue providing quality content. Click for details The October night back in 1991 was dark without a trace of moonlight and it was raining. Your car refused to go on and so you decide to...  ...