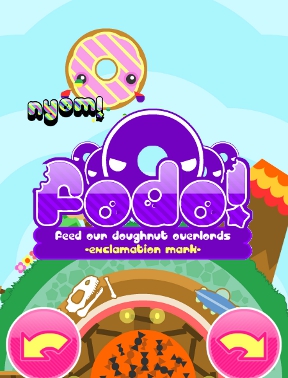 An insidious menace lurks in the sky, above the cotton candy colored trees and higher than the fluffy clouds. This threat to humanity comes from a most surprising place, a place of candy sprinkles and delicious icing. People of Earth, beware, for the doughnuts are finally coming for us in Fodo!, an arcade action planet defense game from John Evelyn of RobotHouseGames. Fodo!, logically enough, stands for Feed Our Doughnut Overlords exclamation mark, and feed those doughnuts you must if the planet is to survive.

Right-click to pull items like flowers or houses off the planet and feed them to the doughnut invaders as they drop from the sky. Feed a regular attacker its favorite food (a windmill, perhaps?) for more points and its hunger will be sated. Simply roll the cursor over tiny Dinks to pop them, but larger doughnuts require more firepower, so grab that active volcano and fire away. Use [arrows] to rotate the planet in your search for the perfect food and to prevent too much damage to the earth. Let a doughnut hit the ground and it will drill away at the planet, burrowing under the surface in hopes of reaching the delicious coffee candy core within. If the core is breached, your game is over.

You'll earn cash after each successful level to spend on various elements for your planet. Flowers are cheap, but offer only one measly percentage point, so doughnuts with a high percentage of hunger won't be stopped easily by them. Storm clouds and stars act as defensive weapons, stunning the enemy for a short time. More items become available as the game progresses. Your planet can only hold 50 items at once, but I never managed to hit that limit while playing. 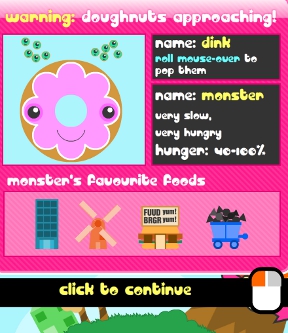 Analysis: The soundtrack is great, the tutorial couldn't be clearer, and the control scheme is easy-peasy, but just look at this game for a minute. These graphics are cutey-pie perfection, all pastel and fluffy and sweet like a delectable doughnut should be. The art style is a visual gem polished to a high gloss, and the sense of whimsy here matches the game's quirky concept beautifully. Where Fodo! falters is in the customization aspect. The shop is only open in between levels, and you have no way of knowing which type of enemy is coming next, making it difficult to prepare and forcing you to buy for quantity, not quality. Also, unless you play in full-screen mode, the descriptive text for each item is nearly impossible to read.

Some sort of doughnutapedia would be a welcome addition to the game, as, after the tutorial is over, it becomes difficult to tell one doughnut from another. Overfeeding an Exploder, for example, unleashes a swarm of Dinks, a mistake I've made often. Speaking of those teensy tiny Dinks, they can often be hidden behind larger elements on the planet's surface, making it hard to tell that your coffee candy core is in danger. Fodo! offers more treats than tricks, however. The game is pure fun, and charming to boot. It gets high marks for originality and has a decent replay value, and I know those dapper doughnuts in their fancy bowler hats and monocles don't stand a chance against you. Now get out there and save the planet!

Aww, this game looks adorable! Great music, too. Unfortunately, after I clicked to start the game, it bogged down so badly that I couldn't even use the right-click menu (to adjust quality) or close the tab. Had to Ctrl+Alt+Del to get away from it, then Ctrl+Alt+Del again because the browser re-opened with the tab active and crashed completely. XD

If it helps, I'm using the newest version of SeaMonkey (basically a lightweight Firefox), which plays most games perfectly.

Wish I could play this so that I could properly rate and review it; it sounds like an easy 5 Mushrooms. :)

Hey Kate! Just popped onto jayisgames to play some games and saw you.
Nice game!

Fun for a bit, and amusing premise.

There is a bug though - if you try to place miners when the mine is at capacity, you'll still spend money even though you can't get more miners. I accidentally did this when I had 300 cash and just clicked a bunch, and it all spent without purchasing new miners.

A great game, but if you die at all, you have to start at the very beginning again.

It's cute, but it shouldn't be hard.

There are a number of mechanics that keep the game simple.

-Most enemies, but most apparently the tiny dudes (incidentally the ones that gave me the biggest problems), stack predictably at the middle bottom of any particular side's tunnel. If they're coming and you have no recourse, just put your cursor where they'll end up, and they'll be dealt with.

-As long as you keep a healthy stock of items, even in the most dire circumstances (which should only occur rarely, where there are too many mid-size doughnuts and you get too occupied with optimizing) you can just drag them off to hold them at bay for a moment and spam items at them.
---Even when the enemies are those ones that explode into a bunch of tiny dudes, follow the first tip.

-Spinning apparently resets enemies that are tunneling, as opposed to leaving them there to have at your planet. All else fails, spinning is a great way to hold them off for a bit.

-Using the volcano whenever possible is a no-brainer, but in addition to firing at things and making them leave, they also prevent motion past a certain point. So the tiny ones will stack at a safe distance from the planet surface, waiting for Volcano to elapse. When it does, follow the first tip.

FYI, the link in the text of the review is broken.