Brash and energetic Arche Plumfield, being young, isn't concerned with much beyond making the most of her family's new life and business in the town of Tonkiness. Her first day at her new school, however, she finds her dreams of learning magic are crushed when she discovers that she can't do so without an expensive elemental stone that her family can't afford. But because this would be a very boring and depressing game if it just featured a little girl and her poverty-stricken family struggling to make ends meet, Arche and the friends she makes in town naturally stumble upon an ancient treasure that could wind up changing much more than whether Arche fits in at school. Fortune Summoners: Secret of the Elemental Stone from LizSoft by way of Carpe Fulgur (the same team that localized Recettear: An Item Shop's Tale and Chantelise: A Tale of Two Sisters) is a big action platforming RPG adventure packed with charm, humour, battles, and more. Also, lots and lots of grinding and brutally hard battles. Yaaaaay! 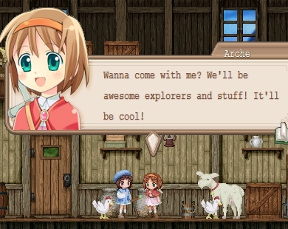 By default, the game controls with the keyboard; [arrow] keys for movement, and [Z], [X], and [C] for various actions. The options menu will let you set the bindings to anything you want, however, and also allows for a gamepad if you have one. (Which you might want to for this if you prefer controllers for action games like I do.) The set-up is a bit like a side-scroller in that the playing field is presented on a simple 2D plane. There's a fair amount of platforming to be had here, ranging from simple to difficult, and dungeons are full of puzzles and obstacles you'll wind up needing teamwork to solve as well. Initially, all you've got is Arche, who does battle with a sword. Combat is in real-time, so enemies will constantly be moving, attacking, blocking, casting spells, and wiping the floor with you in general. As you defeat enemies, you'll gain coins to buy things with and experience to help you level up and get stronger, just like any other RPG. As the game progresses, you'll eventually gain more party members who can lend a hand in battle, each with their own spells and abilities. Don't worry too much if you get wiped out; you can simply take a cash penalty and return to the last safe place. Just remember to save whenever you get the chance, and make sure you're stocked up on adventuring essentials like weapons, armor, bonnets, and underpants looted from your neighbours' homes.

Analysis: Plucky, sweet, and more than a little magical, Fortune Summoners is a game about a bunch of little girls going on adventures and being super excited about all of it. So you know it's got to be more than a little cute. Even if I did utter a small groan of loathing every time Chiffon opened his mouth. (No, he's not adowwable.) The game is a gorgeous throwback to classic action RPGs, with bright colours and a story that remains comparatively lighthearted throughout its substantial length. The writing is generally very good, even if the story holds few surprises, and players who prefer more cheerful RPGs will find a lot to like here. It's well worth exploring everywhere you can and talking to people more than once. The little touches you'll encounter, such as a teacher yelling at you not to run in the hallway, or a little girl urging you to go ahead and take things from people's houses because "you look heroic, and that's what heroes do", are wonderful. Though... there are a lot of underpants to be found. 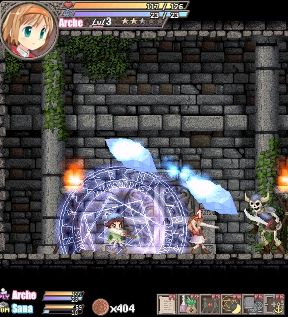 One thing a lot of players may find hard to get past is that Fortune Summoners is most definitely not a button-masher, and any attempts to play it like one will result in sound defeat. Arche can't exactly turn on a dime, and the game doesn't really respond well if you just quickly stab the attack key over and over. There's a lot more timing involved that forces you to pause a beat between each attack to make sure things are registering properly, and as such it doesn't capture the same fast-paced reflexive combat of, say, Namco's "Tales" action RPG series. It's something some players will embrace outright and take to like ducks in a pond, while others will struggle to master it, and others still will find somewhat too stiff or restrictive. Or, like me, you might rage-quit from time to time and then come sulking back to it shortly thereafter. You can adjust the difficulty from the options menu at any time, but when you combine it with the Smash Bros-esque "slippery feet" style of combat, this is going to be one you'll definitely want to try before you buy to make sure it's your bag. Luckily, the demo is remarkably lengthy and should give you ample time to decide how much you like getting beaten like an old mattress.

Fortune Summoners: Secret of the Elemental Stone isn't for everyone, which is a shame because there's a lot to love about it. The writing, the presentation, the cheerfulness, the classic adventuring, even the combat, if you can handle it, makes for a vibrant and exciting game. The combat is going to make or break it for most players, but those with patience and a steady hand will find the flashy spells, combos, and fighting a lot of fun too. Try the demo and decide for yourself. There's a big beautiful world out there full of colour, wonder, and even a little cheekiness from time to time, and if you can handle Fortune Summoners, you're probably going to love it at least a little too.

Does anyone know if saves from the demo can carry over into the full version?

Hi Rob! Yes, they should if you follow the method outlined here on the official site:
http://www.carpefulgur.com/fs/faq.htm

I've played this game yesterday and It's awesome! ,The Best 2D game(For me) ever!.