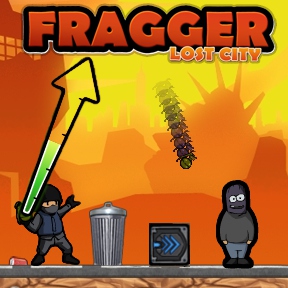 Fragger is back! And this time, those nefarious, googly-eyed masked baddies aren't content to just stand still on a serene and windy cartoon landscape. Now they're stoic guardians presiding over a hell-swept, post-apocylptical world filled with rusted girders, smashed apartments, and broken warehouses.

New locations aside, Fragger Lost City is still the same Fragger people keep coming back to. This latest chapter features a new set of 30 grenade-tossing, physics-based levels with different backgrounds, layouts, and puzzles. The object hasn't changed: you still use your mouse to aim your soldier-guy's grenade throws in order to destroy all the enemies on the screen. Once again there are solid and destructible obstacles, time-delayed directional-based explosives, and boxes of TNT to help or hinder your efforts. Three levels of difficulty (Normal, Hard, and Elite) add some unlockable replayability, with later levels granting the ability to throw multiple grenades at a time.

Thankfully there's more meat here than Harold Brenes' last Fragger offering (Bonus Blast), and the variety of levels have interesting arrangements that take advantage of the background and theme. There's even a fun Plinko-type level that fans should really enjoy. The new levels are entertaining and a little tricky, but not overly difficult. Like before, you can easily restart a level until you get the proper angle and strength of your throws. This makes getting through the game a matter of trial and error, but a satisfying one at that.

While it would have been nice to see new elements added to the core gameplay this third time around (cluster grenades or new enemies, perhaps?), Fragger Lost City is a fun expansion pack that will keep you more than occupied during your next coffee break.

Yay! Fragger's back! I loved that game!

I click Play and nothing happens. Eventually Flash crashes.

I bought this for my iPod after the first Fragger. There is something especially satisfying about the explosions in this game. Love it. My iPod tells me "Lost Planet" is coming soon...!

Gah. Lvl 22 is the only one that's given me difficulty...

Wait till you guys get to level 25. The hardest one in the batch, imo.

don't be misled by the long timer

J-Witz, 25 was difficult. I went back and tried it again (I've beaten all the levels) and I was goofing around and sent all my grenades at once into the box with the guy in from of me and I cleared the level. It eventually killed all the guys.

I played this already on Miniclip. It's worth mentioning that you will get to a point on Elite which appears to be impossible - I think it was Level 16, with an arrangement of gentle diagonal destructible concrete slopes.

It looks like you need the "detonate" control from previous editions (which apparently is in the iPhone version of Lost City), but it's not impossible - you will have to throw

more than one grenade to the first shaft, with just the right timing between them. The combination of explosions will destroy the leftmost soldier and the concrete slabs, including the horizontal one above the second soldier's chamber. You will then need to throw a perfect shot down the furthest shaft, which will roll diagonally to the other soldier's feet

I had the same problem. Click on the round icon at the top right of the game window first, then click on Play.

Just finished all 30 levels in one sitting, not terribly difficult but I'll admit, there are times when I use a non-erase marker on my monitor to remind me where the perfect shot is. Level 27 was the only one that took any real effort for me.

Here's a useful hint for most levels:

Check the background. Often the corners of windows and buildings or some other background item marks the perfect position for your shot. I'm not sure if this is deliberate or not, but it happens quite a lot and makes repeat tries a little easier

Lots of fun, love the game, but in my browser (FF 3.6.9) on Win XP the right and bottom sides of the play area are clipped off. I can only see the First letter "R" of "Retry" and on level 6, the bottom of the I-beam you stand on is just touching the bottom of the viewing area. Is there a way to correct this?

[Make sure your browser window isn't Zoomed out (it sounds like it is). To reset the browser, go to View -> Zoom -> Reset. That should fix it. -Jay]

Fixed. "Zoom" > "Reset" was actually under "View" but that fixed it. Thanks!

Ah right, View. I knew that, but wrote Tools for some reason I'm sure is related to the number of brain cells I have left.

Level 16 in Elite is impossible to pass. The game only gives you 3 grenades, but you need a minimum of 4. Can someone please confirm that or let me know if I am doing something wrong.

@metakan : I have the same problem ... let me know if you find a solution !

It's possible but hard. You need to

drop the first grenade down the left opening. then, once it has roughly reached the second slope, follow it with a second grenade. if you get it right, the first grenade blows up certain blocks, but also blows the second grenade back up the slope a bit. Then, if the timing is right, the seconds grenade rolls forward again and explodes while still moving, taking out the remaining blocks AND the left most bad guy. Then you can pick off the right hand guy as usual.

It's possible but hard. You need to drop the first grenade down the left opening. then, once it has roughly reached the second slope, follow it with a second grenade. if you get it right, the first grenade blows up certain blocks, but also blows the second grenade back up the slope a bit. Then, if the timing is right, the seconds grenade rolls forward again and explodes while still moving, taking out the remaining blocks AND the left most bad guy. Then you can pick off the right hand guy as usual.