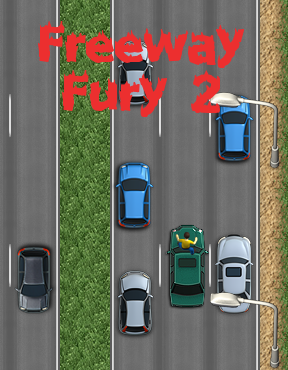 So, you're in the middle of a road trip, and it looks like there's some construction up ahead. The sign clearly says that cars need to merge to the left lane, but it seems like some geniuses are going to speed past the line forming and try to cut in at the last minute. So now traffic is moving at 15 feet a second, the radio has nothing but an endless loop of "Where Are You Christmas?", and the kid in the car in front of you is making faces at you. Doesn't it make you judge want to climb on your roof, commandeer whatever vehicles come along, and carve a swath of explodey destruction across the interstate? Well, no... they'd miss you at NaNa's house. But wouldn't an arcade driving game with that premise sure help blow off steam? Freeway Fury 2, new from Serius Games, lets you fulfill your wildest road rage fantasies in the comfort of your own home.

Move your car around the freeway using the [arrow] keys, trying to reach checkpoints before the timer runs out. Things are pretty crowded, so holding the [Z] key will start a bullet-time mode where you climb on the roof of your car. Jump to a new one by aiming with the [arrow] keys (including diagonally), but watch out: if you miss, you're street pizza. Earn bonus points by jumping on strings of cars, knocking others off the road, and speeding face-first into oncoming traffic. Doing these tricks will also grant you some Nitrous Oxide which, when the up key is held, gives your car's speed a boost. Make it to all seven exits, and the final boss awaits.

The original Freeway Fury was a fun time-waster, but it's here in the sequel that the Grand Theft Frogger concept really lives up to its potential. From the impressive variety of automobiles to hijack, to the varied landscapes, to the arcade-perfect sound effects, Freeway Fury 2 should get your heart-rate climbing as fast as the speedometer. The controls do take some getting used to. You should expect a lot of road rash before getting a sense of exactly how far you can jump. Also, health bars would've been a good addition. Considering the bonus points up for grabs, it definitely should be more obvious to tell if a vehicle won't fall apart if it drives another school bus off the road. However, if players are willing to put in the practice to find the rhythm in the mechanics, they'll find that Freeway Fury 2 burns rubber with the best of them.

I liked the original, and wracked up quite a score with it. But the controls feels somewhat awkward in the sequel, as it takes an extra step to get the guy to take a jump onto a car, which feels less smooth and is easier to get into a collision.

This game makes me feel like a total idiot - I seem incapable of not jumping forward from a car every time i make a successful jump..

Correction: The substance referred to as "nitro" in the game is nitroglycerine, which is a potent combustible, not nitrous oxide, which is an anesthetic.
Indeed, nitrous oxide would be quite counter-productive to the cause.

Chem Nerd: Nitrous oxide (N2O) is a chemical compound used as an oxidizing agent to increase an internal combustion engine's power output by allowing more fuel to be burned than would normally be the case.

As a Chem Nerd you might notice that Nitrous Oxide contains rather a lot of oxygen. This makes stuff burn rather well. Especially when combined with fuel in car engines...

It is a standard trick for improving the performance of race cars. Google it.

You can use the Space bar instead of the Z key to make jumps. I find it easier to hit the space bar in a when in a blind panic than the little Z key :)

How to kill the spaceship:

This is a pretty good game! Original, simple, well executed and FUN :)

Now that's one heck of a game! I LOVED IT!