A creepy little girl. A creepier cornfield with something chasing you. Watchful, monstrous scarecrows that really look like something Sam and Dean and Buffy should be handling. A cheerful cartoon mascot warping into something nightmarish outside a rundown hotel before your eyes. Yessiree, looks like what we got us here is nightmare fuel... literally, since in Lesta's hidden-object adventure horror game Fright, the game begins as you wake up from a menacing dream... just in time for the bus you were riding to crash after being attacked by a literal murder of crows. Because you have never seen a horror movie before, you decide to seek help for yourself and the bus driver at the hotel on the hill. The hotel on the hill with the weird girl on the roof. The hotel on the hill with mail that hasn't been collected in ten years and wire binding the gates shut. The hotel on the hill with the locked basement in the gas station, and the magnetic letters on the fridge that rearrange themselves before your eyes. Look, I'm not sure where you were going when that bus crashed, but clearly it wasn't to accept your Good Decisions Award is all I'm saying. Turns out you're not alone, however, and in short order other unlucky souls begin winding up at the hotel as well, to the consternation of the miserly owner who doesn't want anything to do with any of you. Gosh, I sure none of you are drawn into a dark secret based on something unspeakable in the past that picks you off one by one! Beware He Who Walks Behind The Rows... 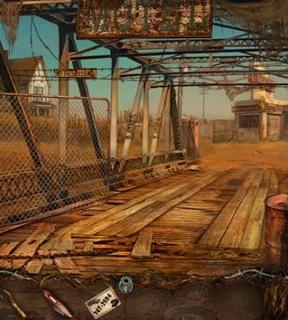 For the most part, Fright plays like any other game in the genre, down to the by-now-standard interactive map and customizable difficulty level. You'll search for clues and items to solve puzzles as you explore new areas, and even solve a hidden-object puzzle or three, though the means of accessing those is... a little unusual. See, occasionally you'll find yourself sucked into images... photographs, television sets... hey, no biggie, it happens to us all! These are the only places you'll encounter any hidden-object scenes, and in a refreshing departure from the genre, even item you see not only looks like it would actually belong in each area, but all hidden-object scenes are actually sequences of connected puzzles that reveal more about the story in bits and pieces. Also a nice touch, if you try an item that you think should work to remove an obstacle, and it isn't the specific object the game is calling for, it'll at least give you a logical reason as to why that particular thing wouldn't work. Unfortunately, while the puzzles you'll encounter vary wildly in a way that keeps things interesting, some of them, like the origami with pushpins, are awkward to handle... one even requires you to know your Western United States geography, or be prepared to look it up. That's not even mentioning the puzzles that are downright weird. Hey dude, let me pour this nasty broth I made from random junk I found outside and boiled with root beer on your grievous injury. No, it's cool, some random lady I never met before told me to do it, and this pseudo-Native American pipe lends a lot of legitimacy to it, don't you think?

Despite some unabashed cheesiness, Fright is actually really engrossing once it gets started. It embodies a lot of the campy flair of horror movies from the '70s and '80s, with scenes that seem to call to mind classics like Children of the Corn or The Evil Dead in little ways. It's rarely what you might call genuinely scary, though a few areas have some excellent atmosphere that make the jump scares effective even when you see them coming. You'll spend a long time trying to figure out where the plot is going because it just keeps throwing new things at you, once after another. There's a girl on a roof! There's a crazy old man who wants you off his property! There's magic evil mist! There's baby stealing! More souvenir-shop quality Native American rip-off trinkets! It keeps you hooked as you play, and while the game definitely has its rough edges with minor glitches such as the voice acting cutting out whenever it feels like it, on the whole it's just so brazenly out there as a spectacle it entertains in a way few casual games do. With a heavy emphasis on classic point-and-click adventure gameplay over hidden-object scenes and a story that never seems to let up with some new development, Fright is a special sort of crazy at times, but if you're looking for a game that is anything but by-the-numbers, this is one title that's well worth checking out.