Froog and the Mysterious Spider Tower

Rule number one: Do not swallow poison. Seems pretty basic, right? Well, when you've got cannons, giant rotating cogs and an army of hungry red arachnids chasing you, poison is among the least of your worries. Meet Froog, a quiet video gamer (much like yourself) transformed into a cute lil' froggy. To return to normal, Froog has to jump through fifty floors of creepy-crawly spiders to reach the only princess who can deliver that all-important smooch. Tapping the screen will launch Froog across the room, so you must ensure your reflexes are quick and your aim is true. This fairy tale isn't just pixie dust and sunshine—the only way you'll survive is by following the rules, and there are plenty of 'em to remember. This is Froog and the Mysterious Spider Tower, a lovable (and completely free!) action adventure from developer Louis Rigaud. 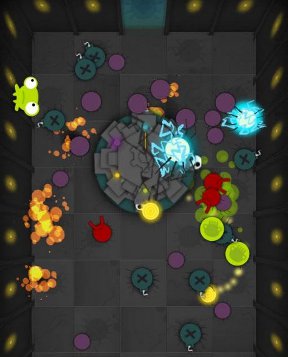 After receiving a brief explanation from a friendly gentleman spider, Froog is thrown directly into the action. Each of the fifty rooms in the tower has its own dangers and tricks to avoid, but the immediate goal is always to find the golden key and unlock the door at the far end of the room. The key typically appears after Froog has eaten all of the local eight-legged inhabitants. This is done simply by jumping straight through 'em, resulting in a satisfying "crunch" sound. Yummy! You'll quickly find, though, that most spiders are too large to eat, or result in some interesting side effects (the most unfortunate one being death). Froog has no combat skills or abilities other than jumping, but you can use the environment to your advantage and even pit the spiders against each other. Every five levels you'll encounter a dangerous boss enemy and can progress to the next floor of the tower upon defeating it. The simple premise and smooth gameplay make it easy for anyone to pick up and play. This is the kind of game which even your grandma will like, though it certainly picks up the pace and has its challenges after the first few levels. The papery "storybook" aesthetic is also charming, evoking the stylish 2.5D worlds of the Paper Mario games.

Even the "mistakes" add to the game's charisma. One of the first things you'll notice are some spelling and grammatical errors both in the menus and in the character dialogue. It's tough to consider this unprofessional when the rest of the game looks and feels so polished. The first time you're told that "princess are terrific!" you'll smile and realize that the errors never detract from your understanding of the game. One wonders whether it was left this way on purpose, as it injects a certain humorous tone into the language. The uniqueness of the game comes across in other ways—the cute sound effects, clever level titles and even Froog's adorable wide-eyed character design all contribute to the magic in their own way. Some background music would be a welcome addition, but the ambiance is strong enough without any at all.

With fifty levels, a variety of gameplay elements, and even bonus objectives to collect the elusive magic beans, Froog and the Mysterious Spider Tower is an excellent experience which will challenge, but never frustrate. The fact that fifty more levels, new game modes and even magic powers are planned for the next update is just a wonderful bonus; Louis Rigaud has clearly put a lot of love into this game. Bend those froggy legs of yours and jump right in!

There is also an online (Unity) version.

Thanks for the heads up! The article has been updated to include the online version.

This is a fun game and ridiculously cute. I've been struggling with level 14 but I don't want to quit.

Glad you like it as much as I do! Keep at it; it just takes practice and sometimes a bit of luck to beat the timed levels. :)