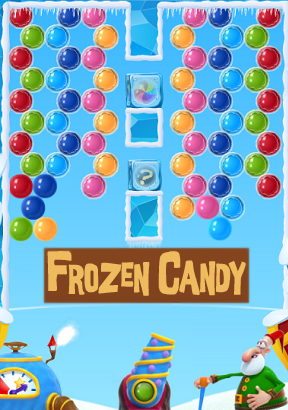 Frozen Candy, a holiday match-3 puzzler from Avox Games, looks a heck of a lot like Puzzle Bobble. In fact, if good ol' dinosaur Bub was on ball-firing duty instead of that Brian Poesehn look-alike of an elf, one could be fooled at a glance into thinking the game to be a shameless clone. Once play stars, though, the unique feel of the mechanics allow Frozen Candy to shine as it's own creation, making for something that feels both familiar and innovative.

Gameplay is of the "point and click with the mouse to fire the pieces of frozen candy, matching colors to clear them from the board" variety. However, there are some interesting twists. First off all, you have a limited number of balls to fire, something usually more associated with Snood-ing than with Move-Busting. Secondly, the physics are intentionally slippery: a fired candy will "stick" to the candy where it lands, but the momentum means that it might circle around and contact other candies. Thirdly, there is the temperature gauge: as time goes by, heat will rise, melting ice and making the candy less frozen to the top and more likely to be influenced by gravity. It's much more intuitive to play than describe, and though it takes some getting used to, these changes make for quite the enjoyable experience

Frozen Candy is a treat for the eyes, ears, and brain. If sometimes victory or defeat seems determined by the luck of the draw, or if the candy-limit feels a bit too frugal, it's more than balanced out by its cool pseudo-3D visuals, its genuine sense of Christmas cheer, and the immensely satisfying popping sound played when candies are removed from the board. Watch out for the overly-touchy shooting: holding the mouse button a second too long will fire a stream of candies, probably very inconveniently. That said, while much of Frozen Candy looks less original than it really is, all in all, it is a charming game that's perfect for a little holiday fun.

Okay, this game is a riot -- as long as one doesn't take one's match-3/bubble popping gaming too seriously. Makes an awesome stressbuster, with levels of a reasonable size. My one complaint is not knowing what colour candy will be coming up next. Or maybe I'm missing something on the screen?
Regardless, I'll be coming back to pop more (fat-free!) candy when next the craving seizes me.

@ Blue Nina: It took me a while to see it myself, but the next color is shown in the base of the cannon: it's the circle just above where the hose connects to the cannon.

So far I've made it up to lvl 27 but I skipped 17, 24, and 26. I don't know how someone can do some of these levels without having seen the walkthrough. This game is WAY harder than Puzzle Bobble.

Quite a few of the levels are perfection-required. You basically have to memorize the sequence of colors you're going to get (not random, like most of these games) and where they go. Heaven forbid you're off-sequence at the end of some levels, you'll just have a nice long mess of balls you don't need.
The physics are fun, so the first ten or twenty levels are awesome. The slow-rotating cannon bites. Seriously, that's terrible. I'd also say that the slight bit of gravity sucks the fun out of any kind of longshot, even just to the top of the field... especially since even a little imprecision is so often a level-killer.