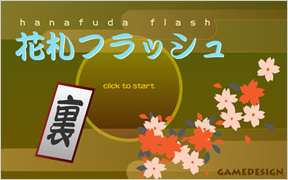 For those who prefer a single-player experience, or at least one to practice with to hone one's skills in preparation for a heads-up match against another human opponent, and if a little Japanese text won't scare you off, then give Taro Ito's GameDesign Flash implementation of Hanafuda a try.

If you're new to Hanafuda (Koi Koi), be sure to review the cards and the rule set for this very simple Japanese card game. The most difficult aspect of the game will be familiarizing yourself with the cards and the sets of value. Once that is done, however, you're in for an enjoyable card game that is very easy to play.

In this version, simply click on one of your cards to automatically capture the matching card from the board, or to discard it if there are no matching cards.

The rule set is similar to Bryon's multiplayer version, but there are several differences to make note of. The most significant difference is the relative insignificance of the sake cup card in the GameDesign version. Pairing it with either the moon or the blossoms light card has no effect. The other major difference is the Koi Koi dialog has the "Call" and "Koi Koi" buttons reversed, with "Call" on the right and "Koi Koi" on the left. 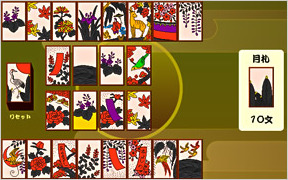 Beginning with the first month, January, and for each new hand, one of the dregs cards for the current month is shown on the right with your score. Whomever captures all four cards of that month during the hand earns 4 points, similar to completing a set. Most other standard sets are recognized with their standard point scores. There are no score multipliers used in this version, and if no one earns a score before all cards are exhausted, the player with more captured cards earns 6 points.

You begin the game with 10 points. Lose all 10 and it's game over; however, earn 50 points to win the game and turn on an alternate "face-up" mode. When playing face-up, you can see both yours and your opponents cards, as well as the next card to be turned up from the deck. Win that game and it's back to normal mode again.

Analysis: As usual, Taro Ito's exceptional game design talent shines through in this implementation. The artwork is crisp and gorgeous, and the interface controls are intuitive and very easy to use. I especially like the elegant single-click selection that works in most instances. For turns where a card matches more than one card on the board, only one additional click is needed to choose which of the two to capture. The downside to this method, however, is that someone just learning how to play doesn't get the benefit of highlighted matching cards. A simple mouse-over showing matching cards on the board would address this shortcoming easily.

I also enjoyed playing through a second time with the cards all turned face-up, as this allowed for a slightly different strategy and made the game seem fresh again. Overall, an excellent piece of work.

How do play face up?

Once you play through the first mode and win with 50 points, it turns face-up mode on.

I have a koikoi_info.pdf that I created that shows all the cards - and the combos to make points - not sure how I'd get it to anyone if they wanted it. Any thoughts Jay?

Oooh! Send it to me and I will upload it to the JIG servers. You may link to it in a comment posted here.

Update: I've edited your comment to point to the uploaded file. Cheers! =)

Hanafuda has always been one of my favoritest games. In Hawaii you can find Hanafuda cards at the supermarket, right with the regular decks of cards and poker dice.

My first time in Maui I spent hours trying to find rules to the game online, to no avail (this was about 5 years ago). I finally went to the local library (yes, I spent time in Maui in a library) photocopying the only existing printed book with Hanafuda rules.

The game still essentially makes little sense to me, but the artwork is beautiful and the gameplay is simple and relaxing. It just gets complicated when you try to calculate your score!

> "It just gets complicated when you try to calculate your score!"

Indeed! Which is why I believe these Flash versions are the killer apps for this game! Let the computer figure it out! =D

The flash game seems to use a different scoring mechanism than the info site describes. For example, if you say Koi and your opponent then wins, their score is not doubled. Also, I'm a little unclear on the three red poems... does it have to be the three with writing on them?

Oh, and you can earn 4 points for having all of a particular month. But not any month. August, for example, does not gain points.

Ok, have you bothered to read what I wrote? Or does everyone just skip past that and click the link? :p

wow, i only had to play 25 times before i finally beat the computer. for such a simple game, there is a lot of strategy involved.

I used to play a version of this game on Yahoo Games, it was called "Go-Stop". It was a little easier to follow along, because everything was in english. I know how game play works, how the card sets work, and which cards to match with which other ones, but I'm having a hard time following along because the in game choices (like choosing to "go" or to "stop") are not in english.

Does anyone have any hints for making this easier? Or is there an english version available for play?

Can I install an English version of Hanafuda? When I played it in Hawaii, everyone spoke English. I need to get this game back into my life. I enjoy it's extra-ordinary means of strategy.

You can play an English version of Koi Koi here. It's multiplayer even.

Well, I am not sure you will be able to answer this one. Since I am totally addicted to this game and very few people are playing the multiplayer version, I have started playing this. Besides that the scoring is different (which I finally have figured out), there is a peculiar oddity in the scoring. It seems that only my opponent (i.e., the computer) will get points for scoring all of a certain month. I have been testing my theory and just to make sure, every time the comupter gets all of the same month and gets points, I then try to get all of that same month......I NEVER get the points. Is this a glitch in the scoring, or what? I have even been thinking that you only get the points for the whole month if you have other points. That didn't seem to fit either. I have been trying like crazy to beat this game (i.e., make it to 50 points), but have yet to get there. I think you're gonna have to consult Bryon on this one, huh Jay? Thanks......I wish more people were playing the multiplayer version.

Hi Sooze - In this version, and for each hand, if one player captures all 4 cards of the current month, the set is worth 4 points.

Logically, the current month starts with January and continues throughout the year with each hand in succession. The current month is shown by the face-up card on the right of the game board.

I just noticed that:

This is just like another version of spit, except with matching pictures, not numbers.

I wonder if there is a place where we can play each other like poker rooms you get.

Lol, it looks like the Japanese text under the deck on the left says "newb". Which is actually a pretty good depiction of myself when it comes to Koi Koi...

There is now an English version linked under the game screen: http://www.gamedesign.jp/flash/hanafuda/hanafuda_e.html

The computer doesn't always win, but you may have to stop many hands that look good. I played like a total wimp and beat the game 4 times in a night. I've started to memorize all the rules and have only beat it once since. Sorry if this was covered before, but is there any version of this nice flash game that has a MUTE option? Thanks.

I came across this game and was HOOKED. Taking Japanese for Beginners at my uni and I mentioned it to my prof and she was like... "That's... not a game for the common Japanese people... usually for the yakuza"

Yakuza is essentially the Japanese version of the mafia lol...

I still love it though. Also, Nintendo used to produce these things!

Dear God, how long have I been playing this game???

Worthless game. The computer plays like it knows what cards are in your hand because it does. Plus pulling ALL the brights at the beginning. Worst AI I've ever seen.