Ever stop and think about how hard the life of a video game character really must be? And not just the manuevering through death traps parts, or the always having to save princes and princesses parts. The part where some faceless, omnipotent entity with a keyboard has control over your entire life, and it's all you can do to jump through hoops and please them. Game.init(), by Keybol, is a platform game that puts you in the shoes of one such AI, bound to ceaselessly perform increasingly difficult jumping tasks for a maybe-malevolent, maybe-benign programmer. But although the preponderance of spikes and sawblades might lead you to believe that Game.init() is one of THOSE high-difficulty games, Game.init() has far more puzzle game in its DNA than you might expect. Although you can move and jump with the [WASD] keys, you can only perform the platform-classic double jump while within certain spheres of light. Game.init() tests more than just your reflexes... It also forces you to carefully utilize your limited jumps to reach the exit in each stage. 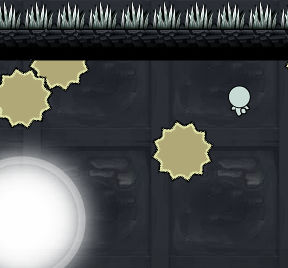 Don't be frightened away if you're not a huge fan of hyper-hardcore-difficulty platformers. One of Game.init()'s strengths is actually in the fact that it's just difficult enough. It blends together both traditional, reaction-time-based platforming elements with the strategic elements of knowing exactly when to double jump within your small available window and plotting out your path through the glowing circles. So while you have to time your jumps well, the game moves at a medium pace that won't try your reaction time too much. And while you do have to think about your path through the level and the best place to use your double-jump, you never have to think too hard about it. And if you do want a greater challenge, the game provides unlockable but optional bonus levels for those who turn in a perfect performance in every level in the game. Game.init() finds a nice, delicate balance, and wraps it up in a clever mechanic that rethinks some of the old platforming standbys.

I'm going to be honest - what I read in the blurb here was NOT at all the game I played. Not only was the game not really about a creator with complete control of your life -

The creator ultimately has little control as "you" apparently change the code to progress, and the "plot" as such is very very basic, much less than other platformers in this genre

- but the platforming itself is not "just difficult enough." The creator incorporates concepts from other platforming games without actually understanding how to use them.

There's a controllable jump height like a lot of platformers, where holding the key longer lets you jump higher and further... but there is never, ever a point where you need anything other than the furthest jump. In a game relying on specifically-timed double jumps, having to hold down the key till the last second when there is no reason to is just an added level of frustration in control. It's like the creator just included it to have it.

And the orbs that allow you to double jump are massive, giving you a lot of freedom on when to jump in them, right? WRONG. In most of the levels after their introduction, there will be a section where proceeding means hitting the very top of several orbs, and doing it any later means certain death. With the aforementioned difficulty in jumping, hitting that "sweet spot" is basically impossible sometimes - not because the player doesn't know how, but because the game itself is clunky and hard to get right. On top of that, sometimes the game doesn't even register a clear keystroke, right in the spot where the player needs to jump.

Level 18 is, I think, a perfect example of what's wrong with this game. There's rotating spike platforms, and the player can, relatively simply, slip past the first with a slightly lower jump to hit the first orb. Except, because the author only planned for the player to always use the highest jump, the next orb is completely impossible to hit that way. Then, later on, when the player reaches two orbs right on top of each other, unless the double jump is activated RIGHT at the tip of each orb, there is no way to get past the obstacles to the next area. That kind of timing is ridiculous with the poor controls in this game.

Ultimately, this was just plain bad. It has the marks of a "first try," incorporating ideas from other games - and if that's the case, great! Hopefully future games wouldn't have this one's issues, and if the author genuinely wants to examine a more complex version of this story, that'd be great too. But the story was boring and the gameplay was frustrating, not because the path through is impossible to understand, but because the design is for a very exact path through, and the controls were not solid enough for that kind of precision.

Rather annoying that you keep dying in EVERY Level. According to the ending comments, this was an early attempt to make a game by the 'creator'. meh. 5/10. I was able to beat every level with 3 stars, after many deaths.

I completely agree with the fact that this was...well...really hard. Great for a first try (good job!), but level 18 could have used...idk...maybe some spike/normal combination obstacles, that way you could land for a moment. Better level design and physics in general would have been nice, but the level design could use some work for certain.

Maybe it was just me, but the respawn animation after dying really slowed me down. I found myself holding a movement button for about one full second before I could actually do anything. One second may not seem like a big deal, but when you have died many times on the same level when you're only one or two jumps from the exit 80% of the time, you're already rather impatient and frustrated.

Level 1-3: That wasn't so hard! Let's inch up the difficulty!
Level 4 onward: I hope you have the precision skills of Star Platinum or you are so doomed.

While the level design faults have been noted (namely, the clunkiness of the controls+precision combination), I have to say that the narrative seemed a little...meh.

It seemed really "tell" rather than "show."

You don't hear tiny screaming, ever. The programmer seems surprisingly uninvolved--they say they have control of the level editor, but they don't pull anything like changing the level design midway through the level (or introducing some kind of mechanic that does that.) I don't feel any kind of pain when my character dies.

The programmer comes off as irrational and kind of silly.

Having gotten through some tough platforming challenges in the past, it just felt like I was robotically going through each level while the programmer made some irrational comment. Whee. My avatar is spraying red pixels everywhere and respawning. Yay. I got past that part of the level. It just felt...robotic. The nice part about the 5 hidden debug levels was honestly that the programmer stops commenting on them until the true ending--you're initially greeted with binary in level 21, then you have zero other commentary you're hit with.

If that was the intent--to make you feel like an unfeeling AI that just wants to complete the level regardless of the irrational human next to you...then it actually works perfectly. If not, then the narrative needs work.

Overall, the game's design has an interesting premise that could easily be expanded. As it stands, it was sort of, kind of fun. It isn't much more than that, though.

First off, the game did keep me interested for a bit, but I would agree that after a bit it was just ordinary platforming. I didn't mind the tiny hitboxes too much as I got used to them, but I can see how they'd be annoying, especially when you have to jump at the moment before you hit a spike ball on top of a circle. On a few occasions (especially level 24), I did use a jump less than the maximum height, but otherwise it most mostly straightforward. A nice game, but just slightly incomplete.

Good game, very interesting around 9 where you edit code. 10/10

21 has a weird binary, try to decode it.