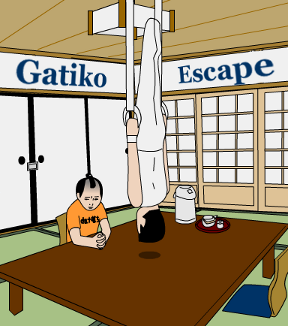 Detarou has an affinity for the bizarre in a way that redefines the concept. When you're playing a Detarou escape-the-room game, you never doubt it. Once again bringing nose-picking and body piling antics to the scene, Gatiko will not fail to please Detarou's fans with all the familiar vagaries and multiple exits (we counted three) including some "Gotcha!" moments and diversions. Yet those who have shied away from other Detarou escapes because of their esoteric puzzles and, at times, mind-boggling logic might want to let Gatiko acquaint you with this grotesquely kooky world in the most affable of ways. Clues here are as clear-cut as you could ever hope for from Detarou and the puzzles are on the easier side. Even so, it feels like a longer, more involved exploration simply because of numerous rooms and outlandish situations to behold. So foray into the strange and entertaining—just to break out from the madness.

I found one bad ending and one ok ending, but there's an item I haven't used. I don't know where to use it...

The thing from the toilet. Is that a ball gag? A slingshot? Does it have anything to do with the fisherman?

And I have no idea what to do with the statue.

@grayk Hey, I'm sure this'll end up being a POP, but what obvious thing am I missing on the

hashtag grid w/ the 1/2/3/4 in it? I've tried half a dozen different combinations of various numbers but no success)

That clue gets combined with two other areas in the room.

Oh, and forgot to add,

I suspect it's related to the 3X3 cabinet that's missing one knob, but thus far I can't open that either

Have you used it with the cabinets?

What about the thing on the opposite wall from the cabinets? Left from the statue view?

i'm stuck with a strange two side hook get from the left of the panda poster, a thing from the toilet, with not getting the key.
i get the two ending too (bad and ok/normal one)

cilck at the up of the bath

Maybe, the hook is related to:

For the better ending:

Use the first knob (which you get out of the nose of the guy in the pond) on the cupboard up in the attic crawl space.

The two-sided hook goes on the fishing line (look up from the scene with the guy in the pond)...this causes the pond guy to open mouth and spit out key card.

Insert key card in the statue and note which hands move and when. Use that same pattern on the device in the cubbies (right column, middle cubbie) to get the second half of the heart shape. Combine that with the first half (found in the toilet).

This will allow you to open the center cubby and get the Red Stamp. Press the red button inside this cubby, go fetch the other knob...Then complete the game as you would with the normal ending.

i have found the "full" ending, with filling all 10 grid. but i still thing it is not the real end as i having the stamp not used.

The stamp is used after you exit. ;-)

It's the Detarou equivalent to a happy coin. Having it when you exit changes the scene you get at the end.

Detarou is famous for games that make you say, "...Wut?"

Well I will never claim to be a Detarou fan, although some of his stuff makes me smile - in a wtf sort of way

who knew you could get 5 bankers out of a closet with one glass of water, let that be a lesson to the world

but I played this through 3 endings - yes I know him enough to know I was being led to certain fail on the fail exit but it has to be done!

What I am curious about is the guy on the rings

When I went back and looked at him at the end, was he dead or what?!

Oh, good observation, yaddab. I don't know what it's supposed to mean but...

He's still holding on so, well, that has to mean something... I guess he's just standing on his head?

Detarou is usually too strange for me...I thought this particular release as less so...but now, after the acrobat oddity, I'm a wee bit creeped out.

That's a little macabre! I thought

The red button maybe lowers the rings, which smacks his head on the table.

While that was thoroughly amusing/strange (translation: typical Detarou fare), I was a bit disappointed that I didn't get to

Oh well, I'll just have to settle for what Tumaru offers in that regard, I guess!

you use Handle 1 on the locker instead of the metal door in the vent.

Yes, the save button is your friend. I should have mentioned that in the review. Sorry!