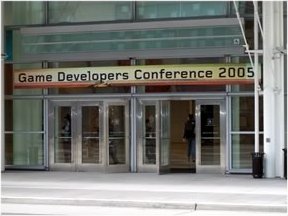 There has been a lot going on these past few days, too much to keep up with and maintain the blog as well, so that is why I haven't posted anything since I arrived. The weather has been perfect every day so far with temperatures consistently hitting 69 or 70 degrees Farhenheit, and without a cloud in the sky. So it is probably no wonder that I have been out as much as possible.

The GDC kicked off on Monday with tutorial sessions that are mostly panel discussions centering on specific topics of interest. The one I attended was one on casual games, and it included a variety of people involved with downloadable, web, and mobile games in particular. Highlights of the day were discussions including Don Ryan from Microsoft Game Studios, Scott Kim puzzle contributor to the highly successful game Bejeweled, Dave Rohrl from EA Online/Pogo To Go, and John Welch from Playfirst. Topics ranged from production and design issues of downloadable and mobile games to the business side including marketing, publishing and retail issues. Noteworthy comments that were made about "casual" games included:

More information about online casual games can be found in a white paper on the IGDA website.

On Tuesday I attended a tutorial on essential math for game physics programmers with a focus on simulations. The all-day session was given by 3 members of the Red Storm/Ubisoft team creating the next game in the Rainbow Six series, Lockdown, and covered topics such as integrators, inverse kinematics, collision detection, and collision response. The session was very well represented by Jim Van Verth, Marq Singer and Jason Clark, all of whom knew their topics well and were able to communicate the rather dense material effectively—though I still wound up with a headache from it all.

Tuesday night we were invited to an IGN sponsored party at a restaurant and bar named "Oola" where an open bar provided martinis for all the happy people. Fun was had by everyone—Thanks, Fran. 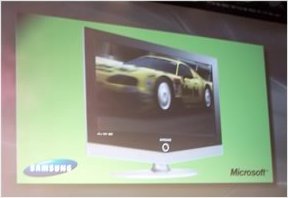 And the highlight of Wednesday was J. Allard's keynote speech where he attempted to pitch Microsoft's next generation platform strategies to the game development community. Microsoft is betting on the entertainment industry entering an "HD era" where interactive content will be always High Definition, always connected, and always personal. Actually, the speech itself was not the highlight, but rather his announcement following the speech: As an expression of gratitude to the game development community, Microsoft would be giving away 1000 HD televisions to those in the audience who held badges of the color of car that passes the finish line first. A video clip was then shown from their Forza Motorsport game with a yellow, blue and black car that corresponded with the yellow, blue and black badges that were given to the key note attendees upon entering Moscone's Grand Ballroom where the event was held. The yellow car won, yet I had a blue badge. Still, it was exciting to come close to walking away with a High Definition television, and I was given a one-year subscription to XBox Live as a consolation prize. All I need now is an XBox. =p

There's more to write, but it will have to wait for another day.

Buy ps2 it's better than xbox, I have socom 2 online we can play and plus Socom 3 is coming in FALL 2005. All i need is headset and i'm getting it soon like in 3 days. w/e Jay u decide PS2 or xBox.

Sadly, I too had a Blue badge. Quite a marketing stunt -- you have to give them credit for that. I do not look forward to the mad rush for seats at next year's Microsoft keynote...

I even heard people grumbling after the Nintendo keynote: "that sucked -- they could have at least given away a few DS's -- after all, Microsoft gave away HD TVs!". Hello people, this is a conference, not a raffle. The actual content of the Nintendo keynote was much more interesting, albeit not as flashy.