Ah, the Renaissance Faire. It's an excuse for grown men to walk around in tights, and for women to wear elaborate corsets that were designed with the apparent misconception that breathing is a luxury, not a necessity. There are the minstrels playing lutes, the exciting joust tourneys, the phantoms, the bad English accents, and all without the annoyances of things like poor bathing habits and the Black Plague. Wait a minute, phantoms? 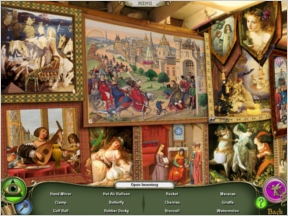 Yes, phantoms. In the hidden object game G.H.O.S.T. Chronicles: Phantom of the Renaissance Faire, you play a ghost hunter called in to aid a renaissance faire/theme park that has seen better days. First, one of its esteemed owners, Margaret, dies. Not long after that her husband and co-owner, Robert, also passes on. But before Robert's untimely death he remarried, dooming the fate of the Spears' family park to a legal battle between Robert's widow and his son. If all that daytime TV drama weren't enough, the poor faire appears to have become the residence of a particularly nasty spirit that has disrupted the day to day lives of the park and her employees.

Now you must track down the ghost, if indeed the phantom is a real ghost, and help put a stop to the strange goings on that have plagued the renaissance faire. To do this, you'll need to hunt down plenty of hidden objects and solve a number of item based puzzles. Keep on the look out for fairies while you roam the grounds of the faire for these little nymphs will aid you on your quest. Depending on the difficulty level you select, they will either give you hot or cold type clues, or just hover around particularly elusive objects.

Investigate the grounds thoroughly and help put its employees and more benign spirits at rest. If you keep your wits about you and exercise your keen object finding skills you should be able to hunt down the trouble-making spirit and perhaps even settle once and for all the fate of the renaissance faire. 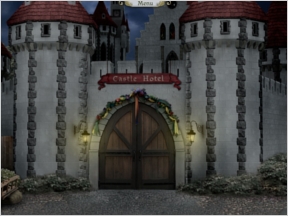 Analysis: While Phantom may have a strong adventure game element going for it, perhaps its strongest point is the core hidden object game itself. Note to other would-be makers of hidden object games: this is how you hide objects! I tend to be picky when it comes to this genre of games, and Phantom gets it right from the start.

Instead of shrinking items down impossibly small, or using objects so obscure you wouldn't be able to tell what you're looking at even if it smacked you in the face and called you a rude name, there just doesn't seem to be any end to the cleverness with which the items are hidden here. I can't count how many times I've used hints only to chuckle at how well I had been tricked. Everything from color manipulation to a solid understanding of lines and contours is used to camouflage items in plain view making these items a particular treat to look for.

This alone would make a game that is satisfying to me, but Phantom holds so much more for the discerning object finding enthusiast. On top of the exceptionally well hidden objects, the item based puzzles that are becoming a staple of the genre are themselves quite clever and intuitive, and in at least one instance had me tempted to perform an experiment in my kitchen sink. This element of the game is just challenging enough to keep your gray matter chugging without causing it to steam up or flame out in frustration.

Also, Phantom just looks beautiful. Have you ever been to a theme park and wondered what it would be like to roam around after hours with the attractions all to yourselves? Somehow Phantom manages to capture that feel perfectly. No, the images aren't breathtakingly beautiful, but instead they portray a kind of quieter, meeker elegance that exudes the feel of getting to see something magical from behind the scenes.

Rounding out a solid package is the story telling. As you make your way through the park, you'll meet a host of characters, alive and otherwise, that stitch together the animosity riddled strife that hangs over the renaissance faire. The ghosts genuinely feel put off by the new mischief making spirit, whilst the living inhabitants gossip with an almost morbid glee about the melodramatic plot regarding the park's ownership. Strong writing and good voice acting seal the deal here.

There are a few things that hold Phantom back, though. For one, character animation is almost laughable, and you get the feeling that the developers should have either chosen static images or gone with full animation instead of trying to find a happy medium between the two (because the medium that was found was anything but happy). Also, while the story telling during the game is quite exemplary, the same could not be said at the beginning and end of the game. You are essentially dumped into the game with little explanation, and the ending was something of a let down.

But though the ending was a disappointment, that can't detract from the fact that the game itself is a blast. Excellent adventure elements and hidden objects done right make this a great game for item hunting enthusiasts.

fun game. i agree with the review completely; the hidden objects were better than others i've played, and the story was good enough. my only complaint would be that it's fairly short -- it took me about 3 hours of gameplay to finish the whole game.

One of the best HOG games I have played - up there with MCF, Return to Ravenshurst and Rosecliff.

Some HOGs are just terrible - I particularly dislike the ones that use a silhouette. And I really dislike the ones that revisit rooms - come on people, it can't be that hard to throw a few objects onto a new background. I have played some real duds lately - Laura Jones and her stupid ferret looking for Tesla's secret box with the ridiculous "punk" with his 52 facial piercings and the "herb teas" etc. I will often persevere with something I hate - like a book or a film or a game - some perverse way of chastising myself for making a bad choice, perhaps? But - some of these games I cannot even bring myself to look at.

This wonderful GHOST Chronicles game is not at all fey, no ridiculous and complex story line, just cleverly hidden objects - not too many - with tricky but not insanely complicated puzzles. The characters support the story, but are not up front and centre - just nicely understated. The suit the character of the game.

I restarted the game after my first completion - the puzzles don't change but the hidden objects do.
Plus - they are no migraine inducing, impossible puzzles eg those cog wheels nor boringly easy games such as move each of the 9 pieces around on their axis to make a picture. YAWN.

I am waiting for the next Faire to visit again, real soon.

This isn't a walkthrough

[Edit: This page most definitely does contain a G.H.O.S.T. Chronicles Walkthrough. Did you actually try looking for it, or clicking on the spoiler tag, before leaving your comment? -Jay]

I just want to warn HOG people about two games I bought recently, one has puzzles with no skip option and customer support is dreadful. In the other one I got stuck on and the support I got back was quite rude and also incorrect and days later I am still waiting for further information. These games are Magic Encyclopedia First Story and ME Moonlight. It's a shame really because the games are quite good apart from that.

[Edit: Where did you purchase the games from? What customer support people are you referring to? This is vital information to be properly informed, as you could have purchased the games from anywhere. Generally customer support won't help you if you're stuck with a puzzle, you need to post your questions to a forum such as ours here. -Jay]

Your reviewer forgot to mention that on replay you can get any of three different endings. The first is kinda lame in a Scooby sort of way, but I liked the other two.

Leah as the villian was a let-down, but my second and third play had Margaret and then Robert as the haunting ghosts. They weren't as silly as the overblown Leah.

Thanks for the review. It was pretty helpful.

HELP! I can't get the queen to fit into the boat. What am I doing wrong? Should I dump my existing game and download a new one?

JC - Problem with queen
Can you please give a few more informations? Where exactly are you? Which chapter, which level?
Did you already had to look at our walkthrough on top of these comments? Maybe you will find help already there.

why are items not staying in my inventory from one location to the next? The spider stays but everything else disappears

Great game!
One issue: at the theater, there is a sparkling padlocked door right in the middle of the stage. Having been through the game several times, including winning the Silver Bough protection, I suppose that the door is just a red herring. I wonder if anyone has found a way to open it, and what lies beyond. I had hoped that finding all the fairies would allow entry, although the only way to it is across the bridge, which can't be crossed again after the player enters the theater area. If anyone has any ideas, I'd be keen to find out!

how do you throw the eggs