Sorry. You're too late. You're already dead. Game over! You snooze you lose... right? Well, maybe not quite. In Ghost Trick: Phantom Detective, an iOS port of the original puzzle adventure game by Capcom, you play a freshly dead spirit who wakes up in the middle of a junkyard to find a helpless young woman and a mysterious gunman having a standoff over your corpse. Things aren't looking good for her, but with a little otherworldly help she might just make it out alive, and you might find out who you are and what happened to you in the process... or you might just vanish when the sun comes up if you can't figure out how to use all your ghostly abilities in time. No pressure. 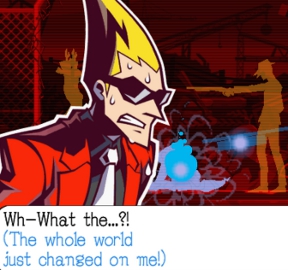 Since you're dead and incorporeal and whatnot, you can't do the usual adventure game stuff like using items or even moving around under your own power. By switching to the Ghost Realm, you'll freeze time and be able to jump your soul to nearby objects, which is not only handy as a means of transportation, but also allows you to directly influence the world. Certain items can be used to perform Tricks; anything from opening a door to moving an object or just causing some sort of malfunction. Just hit the button to hop into the Ghost Realm, and then drag your soul from object to object to get around. You can only move to certain items nearby, so you'll need to plan your route carefully to get around. The bar at the side of the screen will tell you what, if any, Tricks you can perform in the item you're inhabiting.

It's through your Tricks that you can get around and learn things, but also change what happens in the Living Realm... maybe even change someone's fate. See, you also possess the ability to go back in time four minutes before someone dies. That might not sound like a lot to you, but if you pay attention to your surroundings and experiment, you might figure out just the right moment to intervene or set up a chain of events that will save the day... for now. As it happens, there are a lot bigger things going down in town than one or two extra corpses. Strange figures are on the prowl, the spirits are restless, and it seems like everyone but you knows something big is going down tonight... and I don't just mean that hairstyle. 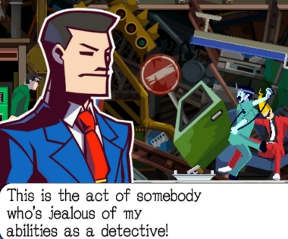 Analysis: Ghost Trick is, in a word, gorgeous. Also colourful, swanky, hip, and funny. It looks like the best jazz music sounds. It animates beautifully on the iPad, and comes with a style and flair all its own that makes it a joy to behold. It's easy to get smitten with its cast of vibrant, quirky characters, and their expressive body language packs a ton of personality and detail. (Is Detective Cabanela the best? Trick question. Of course he is.) As you might expect, coming from the team who brought you Ace Attourney, the tone walks a tightrope above the twin pits of absurdity and seriousness, sometimes dipping a toe into either one. It's weird, surreal, and supernatural in all the best ways with plenty of off-beat humour and memorable moments that are worth experiencing.

More annoying is the game's habit of endlessly reiterating information you already know in little scenes and dialogue exchanges. What? No. Stop playing that cutscene again. I paid attention when it happened five minutes ago. Stop narrating what's happening, I have eyes! Fortunately, it's refreshing to play an adventure game where the puzzles are so very different, less "use item x on item y" and more "Rube Goldberg waiting to happen". While the timed scenes add pressure, paying attention to the surroundings and animations will give you plenty of clues, and experimenting is just plain fun besides. Timed scenes definitely get harder as the game goes along, however, and having to re-watch certain scenes of dialogue over and over if you mess up and need to restart can get frustrating. Oh well, you know what they say. You have to crush a few hitmen to make an omelette. Or... something.

The first two chapters of this game are free on the App Store, with additional chapters available for purchase in chunks, or as a whole game for $9.99 USD. And do you want to know something? That's a steal. That is highway robbery on the developers, because with all its charm, cleverness, and high production values Ghost Trick: Phantom Detective is more than worth the price of admission. I can't remember the last time a game had me laugh aloud or just grin at it in delight like a dope. If you're looking for something packed with distinctive style, weirdness, and some seriously unique puzzle-based adventuring, you owe it to yourself to at least try the demo. You'll be glad you did.

For comparison, the DS game still goes for $30 on Amazon, and it is worth that. Getting this for $10 is amazing. Every single person with an i-thingy owes it to themselves to at least check out the free first two chapters. It's a fantastic game, by the creator of the Ace Attorney series so if you're familiar with those you know the kind of humor to expect, though the gameplay is completely unique.

I hope this does well, because Capcom need all the encouragement they can get to keep localizing their games.

I played this on DS and can also recommend this game. The analysis in the review is pretty spot on, I'd love it if they added some kind of 'hard' more that cut out all the over-explaining and repeating. But the game is a gem, hope it does well so we can see more!

This was an amazing game on the DS, and seeing as it was almost completely touch-controlled, the transition to the iOS should be smooth as, well, a really smooth thing. The single reason I'm not in the App Store buying this right now is that I already own it for the DS, but I'm definitely downloading the demo, if only to see the artwork in high-definition.

Heck, I own the original, but I bought it again anyway!
I've been playing it on my iPad, and I love being able to play the game with such high quality art.

I just hope that enough people buy it to make Capcom release Ace Attorney 123HD in English too!

i just finished playing this from beginning to end last night. The only thing I can think of to say regarding the matter is... holy @#*&$.

I would buy the heck out of that.

This game is simply amazing. I never bought it for the DS, but had always wanted to try it. At first I thought $10 was a tad expensive, but after playing it, I can say that I would gladly pay much more for it. The gameplay is fun and challenging, the characters are funny and memorable, and the clever story will keep you guessing till the very end!

Anyone who has an iOS device owes it to themselves to get this game. Even better, the first few chapters are free, so if you are still unsure, you can try it for yourself.

Ah! I remember seeing this game but since my old DS broke and I'm not playing handhelds like I did when I was younger, I didn't buy it.

Very happy to finally get to buy it in the AppStore and I agree, $10 is most definitely a steal, especially by having the ability to see it on a bigger screen than the original!

Since I downloaded this game for a DS emulator, it has become pretty much my favorite game of all time. Since I own an iPhone but not a DS, I'm glad I can now return the favor and give some money back to Capcom.

What a fantastic game; a definite suggestion for original gameplay that blends perfectly with the storyline. Probably one of the best, if not the very best DS game ever released and there are some serious contenders in that category.

The only minor issue I had is that some characters act in an extremely ridiculous way with their body gestures; that is a part of Japanese humour that really doesn't work for me, but may for someone else.