Gish is a 12 pound ball of tar. Gish is also a cult-classic indie platformer released by Cryptic Sea. In this game you control of a heavy, squishy, sticky glob of goo. Balls of tar would normally be rather inert, but this particular one has had his girlfriend taken away, thus inspiring him to get up off his lazy sack of goop and slosh into action. By becoming sticky, slippery, heavy, or using tar-like ball physics to bounce high in the air, its your job to squeeze through each level and solve puzzles with little more than your own gooey body. 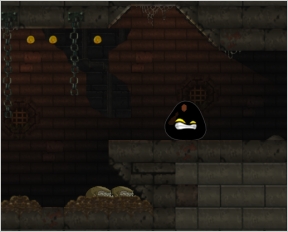 Gish's four actions are each tied to a single key on your keyboard. By turning sticky you can climb walls, ceilings, enemies, and just about anything else you can slop yourself on. A slippery Gish can squeeze through small cracks in the ground, while heavy Gish breaks blocks, pushes switches and can crush many things he comes in contact with. Jumping is a skill unto itself and requires you to build momentum by using the [up] and [down] arrow keys while hopping in the air. And for some advanced moves, you'll need to use more than one ability at a time...

Many things in Gish's world are breakable, and almost every obstacle is built around the game's gooey physics engine. Levers need to be pressed to open some passageways, and you won't be able to simply touch them to flip them. In addition to moving Gish through each stage, you'll also have to push blocks and deal with a handful of enemies. Levels are mostly linear in design (though there are plenty of secrets to be found) and progress in difficulty, length and complexity as you play.

The main story mode in Gish offers plenty of fun and challenge, but there are also a few bonus modes to play, including the ability to play user-created stages and craft your own levels. 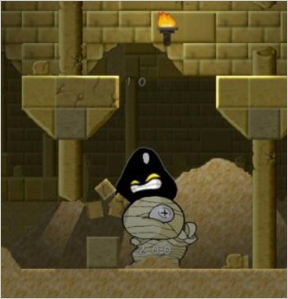 Analysis: As if the excellent music, atmosphere, sense of humor, sweet physics engine and fun level design weren't enough, Gish manages to capture something few modern games manage to preserve: a sense of wonder. Gish is packed with secret areas, including warp zones that transport you to renditions of classic video game such as Pitfall or Super Mario Bros. It's very much an old-school platformer in spirit (sort of like Jasper's Journeys), hauling in and pouring on the nostalgia without apology. You'll feel like a kid again, picking up your first video game and gazing in awe as the world comes to life and draws you in with its enticing secrets. Precious few games deliver this experience, and Gish is one of the best.

One drawback to Gish is learning the controls. Sure, each action is tied to one button, but figuring out how and when to use each ability is a subtle art that you won't likely master before the demo expires. It took me nearly ten minutes to get jumping down pat, but now I can fling myself across platforms, stick to the side and slink my way to the most out-of-the-way areas with ease. It will take some patience to learn how to play Gish (physics-based games tend to be this way), but give it a little time, it's worth every bit of effort!

Old school design ethics combined with modern beauty and ease of play. Gish pulls in some of the best parts of gaming in the last decade and creates something wholly fresh, unique, and fun.

Decent game, but rather repetitive in gameplay. Still,the quotes were amusing "Look what the cat flushed down!" In my opinion, not worth $19.95.
Woot first post!

Hello,
I am surprised there is no mention in the article blurb that this game is the Independent Games Festival 2005 grand winner.

I played for a while and I was impressed... but I just didn't enjoy it enough to fork over the dough.

Hey guys I just thought I'd point out that this game is available on Steam for 10$.

The Steam version is recommended. I bought it a while ago via Steam before my Windows asplode. Very fun but difficult. A joystick or gamepad of some sort is really helpful for those tricky moments.

Valut - Some people don't like the fact that you have to actually be connected to Steam in order to play the games you've purchased through them.

At least with the download version, it's yours to play whenever and wherever you are, regardless of whether you're connected to the Internet.

There is a way to use steam games without being connected to the internet, but from what I understand its tricky as hell

I bought this for $20 when it was originally released by Chronic Logic. Totally worth the cash, especially with the new level editor and community of level creators on the Gish forums. I don't know if the created levels work with the Steam version though.

I've been waiting for a review of this, it stands as a highly polished and recommended title. Gish 2 looks to have even better physics technology but is still keeping to the original art style of Edmund McMillen.

I found a trojan virus in my gish file.

I enjoyed it quite a lot, and then World 3 came along.
I got to level 2 after a dozen tries, only to game over and find myself at 3.1 again...
I think I'm going to put this game away for a while.