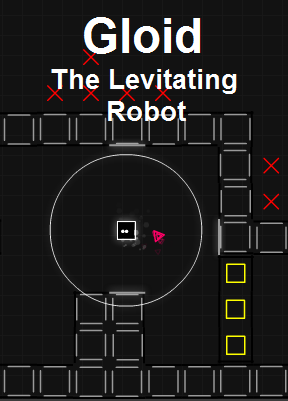 Robots do a lot of things. Some robots fight aliens. Some robots shoot beams when they roar. Some robots want kitty. But Gloid? Gloid just knows how to levitate, and when all you know is levitating, you learn to master it pretty quickly. Gloid: The Levitating Robot was developed by Playnamic Studios as an experiment in fusing puzzle platforming with physics-based levitation mechanics. It's a whole new kind of movement, and it makes for a novel kind of game.

The goal in each level is to direct Gloid to the Green Portal, collecting stars along the way. Use [arrow] keys or [WASD] to move Gloid. Gloid does not jump, however. Instead, his levitation device pushes him away from any nearby walls, horizontal or vertical. Gloid's "Levitation Range" is determined by holding [up]/[down] or [W]/[S]. Adjusting your range will determine how hard Gloid is pushed from the walls (and just the walls). A larger range will give you more propulsion to leap around obstacles, like deadly red crosses and shooting purple triangles, whereas a smaller one will give you more maneuverability to get through small gaps. Adjustment is key, such as in situations where you must increase your range to propel yourself over a platform, than decrease it so you are not pushed away by a vertical edge. Arrowed force-fields will push you around, helping or hindering your progress, activating switches will change the level layout, and portals will teleport you to new locations.

Around each level, you will find colored wisps, which will follow you once you pass over them. Colored gates will require you to have collected a certain number of the appropriately colored wisps to pass. Should you not have enough, the gate will display the number of wisps you need. Some levels contain "nests", which may contain wisps and, if touched, will change the color of your wisps. Press and hold the [spacebar] to call out any wisps from inside the nests. You have four lives to complete each level. This is denoted by the rotating hexagon at the start of the level, that gradually turns to red with each life lost. There are 25 normal levels, 10 hard levels, and 5 bonus levels, and they're sure to keep you busy for quite some time.

Gloid's controls aren't entirely intuitive. After all, when most players try to jump towards a platform, they don't expect for the platform to try to push back. However, once you get used to the mechanics, it becomes quite the entertaining puzzle game. Gloid has a certain futuristic minimalism to it that is very appealing. The simple swirling animations of the sprites are very lovely to look at and, for something that's just a box with eyes, Gloid has a fun bit of expressiveness that makes the game easy to like. Overall, Gloid could stand being much more explicit in its documentation, but it's an interesting twist on familiar platforming mechanics and is worth sticking to.

very challenging game, will be at this one for a while.

Gah! Why isn't this labeled "high difficulty"? That tiny bit of drift, added to the fact that red x's have more reach than they visually show, means that landing on a 1-block-wide safety zone is frustratingly difficult and precise. And the number of times I almost-but-just-barely-not-quite made a big jump was maddening. Neat little game *IF* high difficulty is what you're going for; I'm not a fan of that kind of thing.

These controls are murder. Won't be playing this one.

After 5-10 minutes, I think I had the controls in the bag. At first, very very confusing (especially using the up and down arrows to expand your "pulse" or whatever). But once I learnt properly, the game was a lot of fun.

The controls are only hard if you refuse to work at them I think.