Asteroid under attack! Aliens swarming the skies! Sisters in battle suits bullying land-based bipeds! That can only mean one thing: it's glorkian time! After a few years in the cooker, Pixeljam (yep, the Dino Run team) has finally released Glorkian Warrior: Trials of Glork. The creative arcade game draws inspiration from the best shooters of the olden days, all with a fantastic soundtrack and artwork by James Kochalka. It's a big win on so many levels! 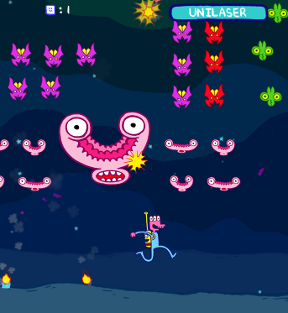 Standing on the asteroid's surface, you are the Glorkian Warrior who has the awesome powers of walking left and right as well as jumping. Most of the enemies fly in from the top of the screen, so all you have to do is maneuver yourself and your Super Backpack underneath and auto-fire will take care of the rest. Pick up falling crackers to boost your score and power-ups like double lasers and twisty lasers to increase your firepower. Even with the surprise ground enemies, bosses and crazy baddies jumping around, you'll somehow manage to stay alive. Until you don't, at which point it's time to play again!

Glorkian Warrior brilliantly blends short repeatable gameplay sequences with long-term goals. Not only does a bit of the story unfold after each round, but you also earn credits that unlock bonuses and gameplay alterations, each one more goofy than the last. Just keep collecting crackers and shooting aliens. There's always an awesome surprise waiting just around the corner.

On my iPhone, I find that the controls do not afford enough, uh, control. If this game were available in-browser, I would find it much more playable; the gameplay simply suits physical up-down-left-right arrow keys better than a touchscreen.

The colours/graphics are fun, and the humour sweetly entertaining. However, I will NEVER play this again, and have deleted it from my phone.

Did you try the alternative control schemes? I always prefer physical buttons over a touch screen, but I thought this worked pretty well without them.

@JohnB I tried all three available control options, giving fair time to trial each (I hopped around between the three options in reaching the last achievement at 20K points). I must have spent about two hours playing, but still found that I was making major needless errors that could easily have been avoided if I were using an arrow-pad to control movement.

I prefer touchscreen games that feel like they were made for the hardware. For example: Duet, Sword & Sworcery, and Device 6.

...Maybe there's a browser version of Glork in the works?