Grand Banda from Pastel Games, Karol Konwerski and Marek Lachowicz is a point-and-click adventure game about funky grannies with an amazing soundtrack by Tomasz TJFK Kuczma. If you need to know much more than "funky grannies having an adventure" to play this game, I'm not sure we can be friends, but I'll tell you anyway. Our two be-laced heroines are having a fine old time in their seaside house listening to music right up until their light bulb bursts and they're forced to find other means of entertainment. Baffling, mayhem causing entertainment. Just click to navigate, zoom in, or use items whenever your cursor changes to indicate an interactive zone. Don't be afraid to try everything, because you'll probably need to. 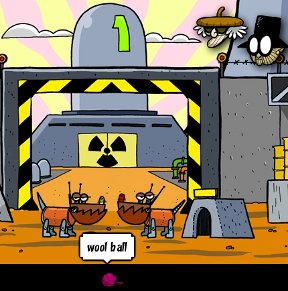 The main problem with Grand Banda is its baffling leaps of logic. Given how little instruction you're given (none), the first portion of the game makes little to no sense as there's no real reason to assume the player would make the connections required to continue the game. The second portion of the game gives you a better idea of what you're supposed to be doing and why, with puzzles that make a weird sort of sense within the game's cartoony world. Even given the rocky start, however, Grand Banda is still worth checking out. The soundtrack is fantastically weird and funny, and combined with the game's unique style and madcap premise, makes for a delightfully wacky experience. One can only hope future installments give a little more direction in some of their wilder leaps of logic, but we also definitely hope we haven't seen the last of these two troublemakers.

Inside the Power Plant

A winner is you!

Inside the Power Plant

A winner is you!

Hmmm. This would make a ton more sense if items/landscape would work before using inventory objects, like being able to turn on a coffee maker before you put the coffee in. Otherwise they just seem like inactive background.

do they take nuclear waste back into the power station?

They bring radioactive waste into their apartment

to act as a light source since their bulb is broken, the wind keeps blowing out their candle, and they can't figure out that closing the window would solve their candle problem...I guess

I had to play it a second time just to get the name of the musician, Thomasz TJFK Kuczma (tjfk.pl) and to find his website. I'm going to have the Little Boxes song in my head for a while.

Yeah, kinda confusing game, but with potential. That funky soundtrack is opening song from Weeds I think.

Loving the music. It's a great rendition of Little Boxes. I am not liking the 'move the mouse to slide the screen' thingy.

Here's something that tripped me up for a long time:

When you get to the �click the green flames� part, don't try to use the combined yarn and fishing rod on the flames. That doesn't work at all. Click on them with no item selected.

I don't like the way the scene automatically tracks with the mouse, especially when I'm going into my inventory. I shouldn't have to scroll all the way back to side A of the screen just because I checked out an inventory item that happened to be on side B, or backed out of a focus scene on the wrong side of the screen. It's rather dizzying. It also makes it harder than necessary to home in on a spot, ditto on the dizzying.

probably should be additional gameplay rather than a cut-scene.

I also agree with Shudog about

hotspots not being active until the key item is available.

>all that trouble for a lightbulb
I hope they grow tentacles.

Another silly and wonderful game from the Pastel team.
The music makes this game, I giggled while solving puzzles.