In short, free indie adventure Grandpa Pip's Birthday by Snozbot, Pipsville is a tranquil, calm place, which is sort of strange because most of it is currently on fire and being carried away by monsters. But hey, if the Alarmist hasn't, y'know, raised the alarm, everything must be fine, right? But even if you can motivate him to do so, it turns out he needs someone else to ring it... someone currently on fire... and the only way to douse him is with the town's only bucket, which, wouldn't you know it, resides with Grandpa Pip. As it happens, Grandpa's sort of upset that the village seems to have forgotten his birthday, and he's not about to part with his bucket unless he gets the cake he knows he deserves, consarn it, so I guess you'll have to talk to the villagers not currently being immolated or carried off by demons and dragons and try to make that happen. To play, just click and drag on the screen to move around, and click on characters and certain objects to interact. In Whack Mode, which you can play from the main menu or later on in the Story, tap [Z] to swing your sword and [X] to raise your shield, making sure to time it right to avoid taking any damage until you reach the end. Tally-ho!... not that there's, like, any hurry or anything. 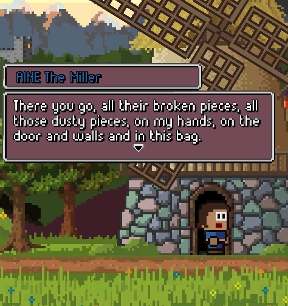 It goes without saying that Grandpa Pip's Birthday is a very silly game, as interested in breaking the fourth wall as anything else, and it doesn't take itself very seriously... which, largely, works in its favour. Characters mill about, doing their usual jobs, occasionally remarking on the "ruckus" that happens to be the total ongoing destruction of the town, but since the alarm hasn't been rung, they assume there's nothing to be alarmed by. It's supposed to be absurd, and the gameplay reflects it, as you scroll around the village trying to figure out who has what you need, and how to get it from them. Admittedly, a lot of the jokes the game tells sort of work the "oblivious town refuses to acknowledge it's being razed" thing over and over, but the writing is solid and funny. The "puzzles" regarding who to talk to are fairly straight-forward, apart from one that involves a bit of unintuitive clicking and timing, and culminates in something very gallant indeed. Grandpa Pip's Birthday won't take you long to play, and if you enjoy snarky humour and ridiculous situations, it just might teach you what to do in an emergency. ... or not. Really, really... not.

This is delightfully bizarre!
Also, you might note that, being a unity game, it's playable in a browser (well, except chrome)

When I tried to download the game from the above link, my Total Defense antivirus gave me a warning that the site had an unsafe reputation. :(