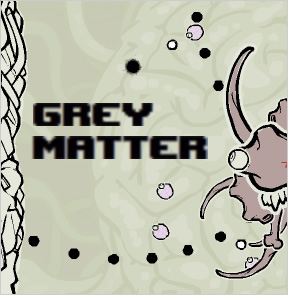 You never quite know what to expect from Edmund McMillen. The neurotic dreamworlds of Aether. The cryptic poetry of Coil. The sheer tingling grossness of Meat Boy. McMillen consistently dances on the outside edge of predictable Flash gaming, with a unique and recognizable art style, and dark themes that bite close to the psychological bone. Here he is collaborating with Tommy Refenes, author of the highly anticipated Goo! (no relation to World of Goo) and a bit of an experimental gameplay maverick in his own right. The result is one of the best action games I've played in Flash, although its appeal may be limited for casual game fans.

Grey Matter is an anti-shooter, which means that you can't actually shoot. You are the bullet, and you attack by directly colliding with the exposed brain-meats of your enemies. Control your movement with the [Arrow Keys]. The [Space Bar] gives you a short burst of speed, and [Shift] slows you down, which is very useful for weaving through tightly-packed enemy fire. Various creepy-crawlies will attack from all sides of the screen, and although their bodies are vulnerable, their bullets, tails, teeth, and lasers are deadly. Basically anything flashing brightly can kill you. (By the way, if you're sensitive to flashing light patterns, skip this one.) 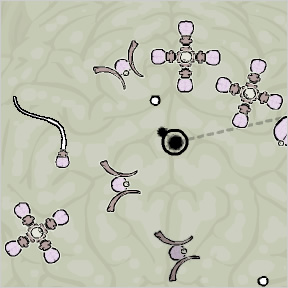 Press [P] or [Esc] to pause the game and enter the power-up screen, where you can spend points on shields, shields, and some other bonuses that are a lot less important than shields. Naturally the higher your score, the faster you can max out your bonuses, so it pays to master the combo system. Ram three sequential enemies of the same species to increase your score multiplier. This also triggers a Trinity Attack, which destroys anything caught inside the triangle formed by the last three baddies you killed. (Tip from the comments: "If you've purchased the "Options" power-up, holding down Shift will not only slow you down, it will extend the options away from you, so you have a larger kill range." Thanks, LSN!)

You'll need nimble fingers to play Grey Matter, because of the small moving targets you have to hit, and the sheer volume of bullets they'll send at you. Apparently, you can play using an XBox controller using a program called FlashJoystick (also by Refenes), but I don't have one, so I don't know if it makes the game any easier. Please let us know if you can get that feature to work.

Analysis: Grey Matter looks great and sounds even better, thanks to the music of Danny Baranowsky, who also composed for Meat Boy and Gravity Hook. The gameplay has all the depth of a modern professional shoot-'em-up, thanks to the combo system. Grey-Matter is perfectly playable without using the Trinity Attacks, but if you do employ them, it becomes almost like a hyperactive, twitchy puzzle game.

There are only a handful of levels, but they get real intense real fast. Beating the game repeatedly unlocks a few extra modes, including direct access to the battle with the incredibly dangerous and aggressive final boss. I can't say there's a lot of replay value beyond that, but like all the best action games, the pleasure here is in mastering the technique, rather than merely surviving.

Most of the neurological nightmares you'll fight can only fire when they are facing you, so try to attack from behind. You can travel on the decorative border on the edges of the screen, while they can not. So one possible strategy is to make calculated blitzing runs and return to relative safety. You'll probably die anyway, but at least you'll have a strategy.

The most interesting thing about Grey Matter for me, though, is the theme of mental illness threaded through it, in the form of ambiguous quotations at the loading screen and between levels. Initially these quotes may seem like window-dressing, but they left a footprint on my mind long after I shut down the game. McMillen has left the connection between the theme and the gameplay deliberately vague, but anyone who has had experience with depression or schizophrenia will find echoes of that darkness in Grey Matter's weird, abstract brain-scape. It's an intimate stamp on a memorable shoot-'em-up. If you can handle the difficulty, this comes highly recommended.

If the game runs slowly, you can also download it here.

This game is so frantic!

I think I'd like it better with mouse control.

There seems to be a lack of comments due to halloween.

There's a little tip you left out of the review that would have helped me a lot, Psychotronic. If you've purchased the "Options" powerup, holding down Shift will not only slow you down, it will extend the options away from you, so you have a larger kill range.

Huh. I never even noticed that. I beat the game mostly by just charging around like a maniac.

Thanks, LSN. I'll add that to the review.

Holy crap this is hard!

I didn't really notice it that much either, until the boss stage when I used this particular strategy for one part:

When the boss is raining down flashing bullets all over the screen, I held down shift so that I could make more precisely calculated dodges between bullets.

Afterwords, it did seem like I didn't have to get so close to the enemies that shoot in all directions in order to kill them.

Plus, it also says that in the game's description on Newgrounds :)

It's very easy if you focus on getting the trinity multipliers *WITHOUT* killing anything in the middle; if you do the monsters come in threes and you will lose the multiplying effect.
Take some time to kill the same thing three-in-a-row, the monsters don't respawn if you don't kill everything that comes up in a "level".

Use [space] frequently to kill as soon as possible, before things crowds and you have little space to zoom around. The good thing is that the [space] speed boost recharges very quickly, so keep using it until the boss (which you need to slow down for once).

Tips on what to get for the power-ups:

Get shields to the max, then get at least 6 lives. You probably have a high mulitplier number by now, so get options max, then the boost powerup if you have points to spend. It's not hard to get everything max with 10+ lives way before the boss level.

Could someone copy down all the quotes between levels. I love the way they sound but alas, I suck.
The farthest I got was the third level(don't be afraid to die), and I just can't seem to pass it. Your help will be greatly appreciated.

Let me turn off the music, the same problem ocurred with meat boy!

Ronmarru: these quotes below are the ones I've seen.

"A strict belief in faith is the worst kind of slavery, on the other hand there is comfort in the thought that God will be moved by our prayers."

"Stress is nothing more than a socially acceptable form of mental illness."

"Anxiety is the essential condition of intellectual and artistic creation."

"A person needs a little madness, or else they never dare cut the rope and be free."

"How do you take away from a man his madness without also taking away his identity?"

"Depression is the inability to construct a future."

"Like dogs in a wheel, birds in a cage, or squirrels in a chain, ambitious men still climb and climb, with great labor, and incessant anxiety, but never reach the top."

"Reality is the #1 cause of insanity among those who are in contact with it."

I'm going to have to go with "epic fail" on this one. It's not possible to handle that many enemies on the screen at once. What's more, it's impossible to tell what's YOU with that much flying around you. There's no color differentiation. And once again, no option to mute the sound kills this game furthermore.

^ To Taybo, just because you cannot handle the difficulty level of a game does not mean it sucks... -_-

I love this game! It is well-designed, has excellent game-play, and poses an interesting premise. The vague instructions and lack of volume control (though you could always change your computer volume if you wanted...) are minor setbacks.

That said, I am surprised the creators overlooked the one glaring flaw in this game: the scoring system.
(1) I could not even beat Normal mode until I figured out that creating chains of Trinity attacks not only gives a much higher score, but helps you get more power-ups, which in turn helps you beat the game. This leads to...
(2) Score = currency for purchasing power-ups? Confusing.
(3) Everything you do during the levels hardly amounts to anything in the score. The only thing that matters is the number of chains you created before defeating the final boss because the final boss gives a HUGE amount of points, which is multiplied by the number of chains. So...
(4) If you look at the high score table, the highest scores are in the billions, and the next highest are in the millions. Unbalanced much?

They definitely need to re-work the scoring system to be more balanced and include some instructions. Other than that, the game is awesome.