Long considered to be one of the greatest classic point-and-click adventure games ever created, LucasArts' Grim Fandango is the sort of funny, smart, wickedly creative game players deserve, though considering it was released in 1998 and often doesn't play nice with new systems, it's both difficult to track down and harder to play. Well, no longer! Thanks to Double Fine, Grim Fandango Remastered has arrived, with a new coat of polish and a lot more compatibility, allowing new players to experience the iconic hit for the first time, and old fans to revisit without the hassle. The game follows Manny Calavera, who's been stuck in his (literal) dead-end job trying to upsell travel packages to those who have just died and want to cross all the way over for quite some time. His boss wants him to sell more luxury packages, but it's not easy when he's constantly being outdone by his slimy coworker Domino Hurley. Manny used to be on top, but now he can barely keep himself from getting fired when he's stuck with crummy clients, and he can't even remember what sin he committed in life to find himself stuck in this afterlife holding zone. He thinks he's finally found his salvation when he winds up with a crack at a soul who should be bound for the greenest pastures possible, but something is rotten in the Land of the Dead. Will Manny ever get his final reward? Or has he stumbled across a mystery that could prove more dangerous than he ever imagined? 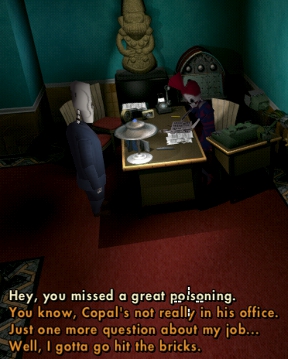 Grim Fandango's controls are very basic. Click anywhere to make Manny walk, and double-click to make him run. Clicking on people or items opens up a contextual menu, allowing you to look at, talk to, pick up, or use whatever it is you're looking at. Pressing [I] or clicking the suit icon in the bottom right corner opens your inventory and allows you to cycle through things you're carrying, or take them out to use. It's important to note that there is no autosave, so you need to save your game manually. If you've already played the original game, then none of this is going to be much of a change to you, apart from the new mouse-controlled movement, and largely the Remastered version is more subtle than drastic. While the developer commentary is a lot of fun, the game itself has mostly been buffed rather than completely redone. It sounds fantastic with its orchestral accompaniment, and while not every part of the game looks as vibrant as most of the character models, the new lighting system adds a nice touch of atmosphere. Still, it might not have quite enough bells and whistles, or even significant upgrades, for some players. The stretched display for higher ratios is a bit of a downer, and as of this writing some players on Macs have reported bugs and sound issues, though it's expected these will be patched. Arguably, figuring out how and what to improve on a classic is no easy task, and the Double Fine team faced a lot of difficulties in working with (or evening tracking down!) many of the original assets in their quest to lovingly restore this classic. 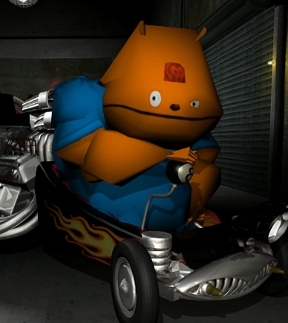 If you've never played Grim Fandango, well, there's a reason why it's got such a huge following even seventeen years after its original release. Full of snark and clever humour, as well as a genuinely intriguing tale that covers four years in Manny's, um, "life", Grim Fandango is the sort of game that perfectly marries noir-like mystery with mythical folklore, whimsy, and modern humour. The eclectic cast of characters, rendered with creative, colourful designs, are distinct and memorable, from Manny himself to hyperactive demon mechanic Glottis, and the dry wit of Mercedes. Its puzzles are, ah, very old school, lacking any hand-holding and often very little direction at all. Even if you know what your objective is, actually accomplishes it typically requires the sort of roundabout "adventure game logic" the genre has always been notorious for... less "put the key in the door" and more "balloon animals, chemicals, a fire extinguisher, and playing cards". For a lot of players, however, that's part of its charm, in addition to being just the way games were made at the time, and Manny's four year tale is so engaging that you'll want to stick with him every step of the way. It mixes Mexican folklore and style with themes and concepts from classic movies like Casablanca and more, creating a world that feels vibrant and unique, full of intrigue, drama, magic, and comedy in equal measure. If you're a point-and-click adventure fan with an appreciation for comedy and a finely crafted tale, then Grim Fandango Remastered is a journey you deserve to take.

Grim Fandango is up against Day of the Tentacle for my best adventure game ever. The puzzles in Tentacle are a bit tighter, but Fandango's story and characters are just gorgeous - like a great Pixar movie with puzzles (almost all of which make sense!).

If you've never played this game: don't be put off by the obtuse title, and you don't need to know anything about Mexican mythology either. Just bring tissues for the end!

I'd like to keep this next to where my heart used to be :)