In Elephant Games' hidden-object adventure Grim Tales: Color of Fright, you're on your way to your annual family reunion, trying not to let the dramatic, threatening note that sounds like it was penned by an enthusiastic World of Darkness LARPer get to you. When you arrive at your family's castle, however, you find your family missing and some seriously freaky mojo going on. See, turns out the family's adopted little brother Thomas has some serious baggage and some potentially unhealthy attachments to his adoptive sister Luisa, who he believes "abandoned" him when she fell in love and had a family with someone else. While this might make for a slightly awkward family reunion, add to that Thomas has discovered he has the ability to make his art come to life, even to create whole worlds inside his drawings, and thanks to some epic sense of entitlement, he's using it to take revenge on the family he feels has ignored him. You'll need to use your own unique sixth sense to track him down while solving puzzles and hidden-object scenes and looking for items, but also a unique paint-by-the-magical-symbols kit you probably won't find in your typical craft store that can help you create things that will come to life and aid you. 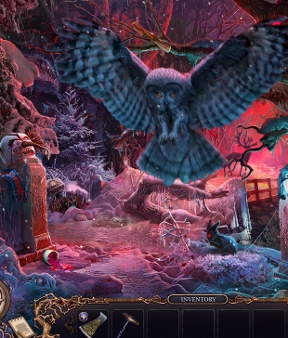 Color of Fright's user interface feels a little clunky, with the panning rooms taking a little while to get used to and click detection seeming a little finicky, but the story is perhaps even more so. It's framed around connecting several of the last Grim Tales games as all having happened to one family, which is fine though that means you'll likely feel you're missing a lot unless you've played The Vengeance, Bloody Mary, and The Legacy, but it does so in a way that feels like it's just stapling elements together haphazardly. The game's main plot could have stood on its own without tying it into the others and would have been a whole lot more coherent for it. There's magic wolves! There's an angry ghost! There's some freaky Flowers in the Attic subtext going on with that guy! Fortunately, the game calms down a bit after a while, and makes up for its chaotic opening by having a ton of variety within the gameplay. Hidden-object scenes incorporate a myriad of elements, puzzles are packed with different mechanics and cleverly presented, and the whole thing just feels like it's pulling out the stops in an effort to be as different and varied as possible.

It also can't be understated how pretty Color of Fright is either. It's not just that the art is great, despite characters tending to look weird and puppet-like when they animate, but there's a tremendous amount of creativity in the environmental design. You'll spend your time leaping between the strange and surreal world of Thomas's art and the elaborate castle in the real world, and while the latter is pretty in a "hasn't this family ever heard of a lock that doesn't involve an elaborate puzzle mechanism" way, it's the former that shines with warped and twisted details that makes each scene a joy to explore. It's clear Elephant Games has pulled out all the stops with this one, and the result is a game that drips with detail and will keep you entertained every step of the way. Despite the fact that its story is convoluted, the fact that it's ambitious and cinematic makes it stand out from a slew of other, tamer casual titles for the simple fact that it's working as hard as it can to be original and engaging. Thomas fails to be at all sympathetic despite the game's attempts , largely because his reactions seem so over the top and self absorbed as to be alarming, but hey, a hateable villain isn't necessarily a bad thing. Despite its flaws, Grim Tales: Color of Fright is gorgeous, crazy fun from start to finish, and well with taking out for a test drive if you're looking for something different.