Pushed from a bridge by a shadowy figure, your dear twin sister Luisa is dead. You haven't seen her since you were both children, but you find yourself driven by a burning desire to uncover her fate and the identity of her killer and return home for the first time in years. A mysterious creature offers you the chance to relive Luisa's memories and uncover the truth, maybe even save her, but if you fail, your soul will be forfeit. Will you be able to untangle the mystery surrounding the sister you thought you knew in Elephant Games' creepy time-trotting hidden-object adventure Grim Tales: The Bride? No, go ahead, it's cool. I'm sure you won't live to regret your deal with the devil at all. Those things always work out so well. 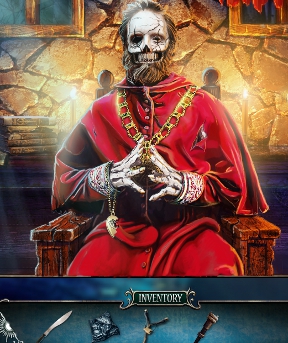 To uncover the truth about Luisa and maybe save her life in the process, you'll split your time between tracking down photos in your family home that transport you back in time, and tokens that have some sort of relationship with Luisa herself. While most of the gameplay can be summed up with "I can't open X without Y", you'll also solve puzzles, hunt for clues, master mental control over the insect realm, and... also, a chipmunk will bring you a slingshot at one point. (Curtis would be proud, you rodent whisperer you.) Depending on the difficulty setting you choose at the beginning, interactive areas may or may not be highlighted with Cullen sparklies, but if you examine each area carefully and watch for the cursor to change, you should be fine. In a pinch, clicking your unusual pocket-watch during ordinary gameplay will also tell you where to go next, and also can be used to skip particularly frustrating puzzles. Handy! 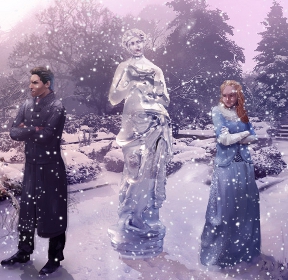 Analysis: If you're going to take a trip through your estranged sister's increasingly miserable final days, it might as well be scenic, and The Bride has that in spades. The artwork is beautiful, the environments are atmospheric, and the soundtrack is actually surprisingly well done, mingling vaguely discordant tracks for an eerie feel in some locations and knowing just when to kick in or fade away. If the game falls short, it's because it initially fails to really marry its narrative and gameplay. You're left to infer a lot on your own and check your journal frequently to get a lot of context that really should have come across better within the game itself. It goes without saying that throughout the course of your journey back in time, you'll uncover a few dark family secrets, which is de riguer for any fashionable young lady these days. The occasionally goofy gameplay and item use at times feels as though it's at odds with the atmosphere and tone the game is striving for, but, well... I was on board the moment Darth Malak crawled out of the fireplace.

Fortunately for fans of the genre who prefer gameplay to story, there is a great deal of the former to be had. Throughout the course of the game you'll visit a remarkable number of different locations packed with all manner of hidden-object scenes that never repeat, which is a feat itself. There is a fair amount of backtracking, but there's also a remarkable amount of puzzles and new areas to explore so that just when a location is beginning to feel old, you're transported somewhere new. Depending on your play style, the game could take four hours or significantly longer, and maintains just the right amount of low-key creepiness throughout. While the ending seems a little abrupt, the bonus chapter in the Collector's Edition does, for once, feel like an actual bonus rather than a final installment of a story you need to play to understand the rest. While it doesn't quite reach instant classic status, Grim Tales: The Bride is a beautifully designed and well-made adventure from start to finish that offers a satisfying, meaty chunk of cheesy ghoulish fun. Try the demo before you buy it, but if you're a fan of the hidden-object hunting and impeccably dressed demons, you'll want to try it for sure.

Preface to the Tale

Inside Church, Tree and Fountain

Inside Stable and Lake

You have completed the first 3 chapters of Grim Tales: The Bride.....to be continued.

Gazebo and Valley of Ice Figures

Valley of Ice Figures and Gazebo

Inside the Lodge and Up on the Roof

Father's Secret and the Levitation Platform

Zoom in on the Boy's Vase, place the Dolphin Key, and take the vase.

Darth Malak? I see I'm not the only one who spends too much time on Wookiepedia.

[I'm ashamed to say I don't know what a Wookiepedia is, but unashamed to say Knights of the Old Republic was a brilliant game and anyone who doesn't think so should be shunned. :) -Dora]

This game is beautiful with a great soundtrack. I enjoyed the combination of insanely easy puzzles with more difficult ones.

However, I'd recommend waiting for the standard edition; the bonus play isn't that expansive, and the hints--even on the harder option--are so obvious that the strategy guide isn't needed.

Preface to the Tale

Inside Church, Tree and Fountain

Inside Stable and Lake

You have completed the first 3 chapters of Grim Tales: The Bride.....to be continued.

Gazebo and Valley of Ice Figures

Valley of Ice Figures and Gazebo

Inside the Lodge and Up on the Roof

Father's Secret and the Levitation Platform

Zoom in on the Boy's Vase, place the Dolphin Key, and take the vase.

im having real problems with the ampitheatre basement. i have used the oil on the engine and have put the leaver in but nothing is working. the hints keep telling me to inspect the platform but i do this and nothing happens. im getting very frustrated.

susan -
Did you pull the lever to turn on the lift mechanism?

If you get stuck again, there is a walkthrough above the comments that should help you out.

same situation is here with me i have put the lever and also pour the oil in the engine but its still saying that engine need lever and it bit rusty,i have seen strategy guide too but it is having the problem that lever is not moving.please help me out em stuck in the game :(

Sidrah -
Is the oil can still in your Inventory? If so, use it again. If not, I suggest contacting tech support wherever you bought the game.

im having the same problem with the lift mechanism ive used the oil can ive had the lever in but i cannot move it... did anyone have any luck?