The year is nineteen-twenty-whenever. The cities are roaring, prohibition is very much in swing, and your just another fella who's quick with a gun and a quip, lookin' to make a semi-honest buck on the mean streets. Vinnie Cannoli's your name, and those who hear it tend to forget it quickly on account of rapid and severe lead poisoning. You've been sent to Thugtown, USA on the lookout for some jadrool by the name of Frankie. You're supposed to bring him in alive, but one look at the locale tells you that being among the living is a precious commodity here in Thugtown. Zombies. It's always zombies isn't it? But hey, it looks like the boat that brought you here is out of commission, so if flight's not an option, you might as well fight. A job's a job, innit? Besides, you're nearly as curious as to what happened here as you are in figuring out how many different ways the undead can be eviscerated. And, if nothing else, the town looks stocked with your three favorite things: Guns, Gore, and Cannoli! An indie run-and-gun action-platformer horror game from Crazy Monkey Studios and the Claeys Brothers, Guns Gore, and Cannoli takes you into a gorgeously gory hand-drawn gangster wonderland, with twists and turns aplenty and a nice dash of comedy as well. 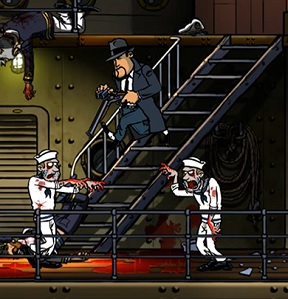 Those who've played other platform shooters, particularly of the Metal Slug/Heli Attack 3 variety, should generally have a sense of what they're getting themselves into. The default single-player controls have you moving and crouching with [WASD] and jumping with the [spacebar]. You fire your current weapon with [J] and reload it with [R]. You cycle weapons in your arsenal with [L]/[M], or equipping them directly with [1-9]. In a scrape, [K] delivers a solid kick, the perfect thing for knocking down doors or giving yourself a little leg room. Pick a few grenades up, and you can chuck them with [U], and likewise for molotov cocktails with [I]. That's a lot of keys to remember, so it might be best to re-map them to your personal play style. Blast your way through 12 stages of mooks and bosses, and just maybe you'll live to ply your completely legitimate business another day.

Guns, Gore, and Cannoli is a definite case of quality over quantity. The art and animation in the world of Thugtown is absolutely gorgeous and, with the developer's keen eye for bloody slapstick, it comes closer to the dream of a playable cartoon than any game in recent memory. It's over-the-top, often hilarious, and, even with the genre's usual waves of similar (though again, wonderfully designed) enemies, the pure visual appeal of the graphics keep things from getting repetitive. The plotting is decent, though quite atmospheric. Obviously the dev team came up with "zombies + gangsters" first, then created a story to fit the premise, but let me tell you, one part The Godfather, one part The Goon, and two parts Zombies Took My Daughter is a winning combination.Certainly, some of your enjoyment will be based on how much you enjoy Vinnie, the protagonist. If a quip-spewing sociopath is a bit too much to handle as a player character, he definitely won't be for you. Still, even with his limited quip-ography, I ended up liking the guy, thrown as he was into circumstances beyond his control and, if he seemed to enjoy the carnage a little too much, well, you can just let the zombies eat him. 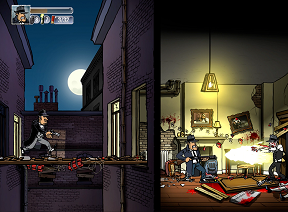 The biggest drawback of Guns, Gore, and Cannoli is probably length. Aping its quarter-chomping arcade predecessors, The full campaign is quite linear and only took about four hours to go through. Apart from local multiplayer, there aren't any alternate game modes. So, as enjoyable as your run-through will be, what-you-see-is-what-you-get. Also, while its selection of weapons was good fun (you'd think the animation of zombies catching on fire would get old by the six-dozenth time, but, uh, nope), I would have appreciated more melee weapons, especially for when enemies get clustered around you. Though that just may be because of my personal conviction that all zombie games should allow you the chance to whack stuff with a crowbar.

But if Guns, Gore, and Cannoli was meant to be solid genre title rather than a revolution of gaming, then it certainly has accomplished that. No one can deny that there has been a glut of pairing zombies with a roulette wheel of settings and aesthetics, but here the most has been made of where the ball stopped. Now, if only I could be so certain of the quality of my Oxford comma usage...

I can't wait to play this one. Looks amazing.