Once upon a time, fairy tales made sense. You had your fair maiden and your prince charming, a dragon gets killed, a witch is forced into retirement, everyone eats the candy house, the end. But look at Happily Never After: the heroine isn't even wearing a dress, and she climbs trees and gets herself dirty and she's not even in love with a prince. It's nothing like the good old times, I tells ya... 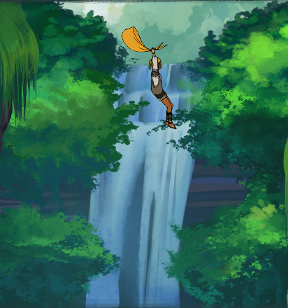 Happily Never After is an interactive fiction game, where the "fiction" part is provided by a honey-voiced narrator, whose self-professed job is to guide the plot and provide a moral. The protagonist of the tale is an unnamed young girl with a wonderful fashion sense who sets about finding some adventure in a vast and unexplored forest. She moves with the left and right [arrow] keys, jumps with the [spacebar], and pulls herself up with the [up] arrow when she's hanging off an edge. On her journey, she encounters useful items (which she picks up by walking over them), but her inventory can only hold one at a time, and they are used automatically when the girl is at the right place. 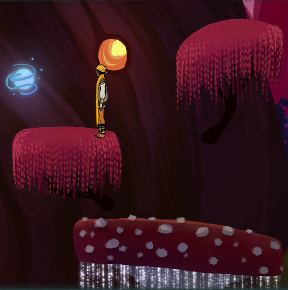 The straightforward gameplay leaves a lot of room to the story and the overall atmosphere. The graphics are gorgeous, and provide a terrific background for the plot; what with the glimmering mushroom caps and majestic trees, the game looks like a storybook. Which is all the more ironic when the idyllic fairy tale world starts crumbling down, because somewhere along the way, the young heroine apparently gets tired of the goody-two-shoes rules of conventional storytelling. She takes matters into her own hands, from dealing with magical creatures to antagonising the narrator who's bent on delivering his version. Some hilarity ensues and the whole thing ultimately veers into delightful absurdity.

It's great fun to see a traditional tale get deconstructed and then put together again in a very eccentric way; the only flaw is that the game is probably too short to bear the extent of its ambition. It feels rushed in places and, though it drives its point home quite clearly, it would have been much more complete with a few more levels. As it is, it's still an interesting experiment in nonconformity and worthy of your time.

...
Are we meant to feel sorry for the narrator?

Nah, I don't think he has the right to impose his view of things on anyone. He got what he deserved, the grumpy sod.

I can't get passed the unicorn. Any hints on that would be greatly appreciated.
I know I have to avoid the rainbow rays. I go

down and into the rabbit hole, waiting for the firing to stop

then climb up again and get as far as the first green ''island'' and then I get shot because I can't find a place to hide.

The unicorn uses different attacks depending on where you are.

Remember, the narrator claims that you'd corrupt the unicorn as soon as you touched it.

@ SonicLover
So does that mean I have to touch it?
Sorry, English is not my first language, so I'm not sure what it means ''corrupt the unicorn''

@celli: More or less. Make sure you approach it from behind.

I beat the unicorn like this (this is an explicit solution, read only if you've run out of options :))

I climbed on top of the first of the tree branches above the unicorn, then jumped straight onto its back. You have to time it carefully so you don't get hit by a rainbow, though.

OK I'll try that, thanks for the tip SonicLover and keep your fingers crossed for me :-)

I think this game needs a platformer tag. Controls are a little sticky but the graphics are really pretty and the voice over is perfect.

I tried doing like SonicLover and Starchild said, but I'm not quick enough, thanks all the same.
I stink at platform games, but I keep trying.
The graphics are wonderful and so is the music and the story.
Too bad the game doesn't save, so when you close it and want to try later you have to start from the beginning.

But for me... it's a deadly combination of lag and unforgiving platforming. Really easy jumps get swallowed up by lack of control. I'll restart and see if that helps, but I'm not optimistic when this is the same machine that handled Memohuntress without much fuss.

Lovely graphics and music, but for me, the controls and no save feature are putting a damper on an otherwise enjoyable gaming experience.

Do you have to play with the sound up?

@ dsrtrosy
I think it's for the best, one of the most important parts of the game is the narrator and his reactions to what the girl does, so you're missing out on something if you can't hear his voice.

X( The controls and mechanics of the game are awful!!!X( I could adapt to the controls much easier if I didn't have to be in exactly the right spots to jump onto an edge to hold onto it. That is way too finicky. The humor of the game/story is great! But that alone is not enough to keep me playing through the frustration of starting over and over again because of control and mechanic issues.

How do I get the axe handle from the dwarf?

To get the axe handle:

You have to jump on the dwarf's body, unfortunately.

I'm not quite sure why this game is tagged as 'interactive fiction'... on the one hand, it is near-literally a fiction that is interactive, but in game context that tends to mean text games, doesn't it? This is a platformer; if anything, 'narrative' would be the tag I'd expect.

On a different note, can anyone help me get past the wolf at the beginning? I must say, my character's sudden deaths when I did something wrong shocked me a bit. It's pretty jarring with the overall tone of the game so far, but from reading the other comments and the review I think that perhaps that might be deliberate.

Yeah, I understand the tag is misleading. While the game is literally a fairy tale that you can interact with, you're right, "interactive fiction" isn't usually associated with this sort of game.

As for the wolf,

you'll die if you give him the chocolate or the bone. Instead, you have to clamber up the trees and to your left (basically you end up near the beginning of the level, just higher up). There you'll find pink flower petals, which will put the wolf to sleep.

If anyone is interested, the soundtrack to this game is here.

Is there any way I can play this with Linux? It says I need Flash 11.7.0 but it looks like Adobe stopped supporting Linux, and I can't update my Flash player past 11.2. :(

I got as far as racing some light fairy up a tree, grabbed it, it ran away then I couldn't get any further (but I cheated my way past the dark monster and it wouldn't let me procede).

For me, the situation with the dwarf was rather like being told to say 'apple' in Portal 2.. Since there isn't any "talk" button, I tried pushing space next to him and, whoops!

I did feel bad for the narrator here. The player here was not a very nice person. Got until the unicorn bossfight then couldn't get to the first platform. The controls are pretty finicky for a platformer, though I like the gliding mechanism.