Christine Love practically wrote the book on crafting complex characters and compelling stories in visual novel games, and Analogue: A Hate Story delivered all that and more... but left us with a lot of questions. Now in the sequel, Hate Plus, on a three-day journey back to Earth, you'll learn more than you ever wanted to know about the dark truth behind the fate of the people on board the doomed starship society, the Mugunghwa, and the origins and existence of *Mute, the combative security AI. Where Analogue: A Hate Story dealt with unraveling the reason behind why the Mugunghwa had been dead adrift in space for so many years, Hate Plus focuses on both a greater understanding of one of the core characters... and the most questioned aspect, the how and the why society aboard the great ship regressed in the way that it did to such a horrifying degree. 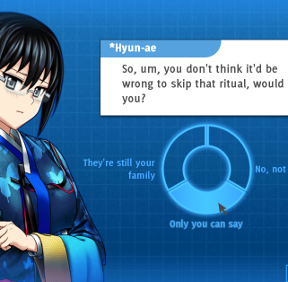 Though it plays like a visual novel, the game is set up as a representation of a high-tech user interface onboard a spaceship, with your AI of choice serving as your guide. The game literally does take place over three real-time days, with the ship's limited power reserves forcing you to pick and choose your actions before you need to stop. You are, of course, supposed to wait until the next day to play more, but if you're sneaky and savvy and have to have a review ready, you can probably figure out a way around that. By having only one AI with you this time, the game is even more straight-forward than before, and consists of little beyond reading and chatting. The focus here is on the narrative, and presenting it in a way that draws you into it as well as if you'd really been there yourself. The story and its characters are both the focus, and the puzzle. Each day, you can pick and choose whatever data blocks you wish to extract, each one taking two percent of your remaining power reserves. Though each block represents a contained storyline or event, in a way, they also weave and tie into each other in a way that slowly reveals the greater whole. You'll need to replay the game more than once to see everything, but the difference between *Mute and *Hyun-ae goes far beyond the cosmetic. 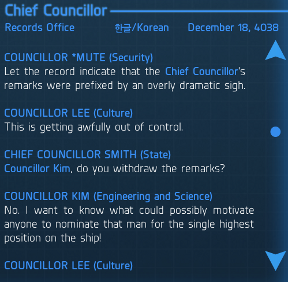 Perhaps appropriately for a game focusing on a pair of futuristic AIs, Hate Plus is a significant upgrade over its predecessor in a myriad of small, welcome ways. One nice addition, is being able to click on someone's name in a file and have your AI remind you of who they are and where you know them from... which, as someone with an abysmal short-term memory, is a function I'd pay money for in real life. Other changes are most cosmetic, such as the subtle but expressive changes to your AI's face as you mouse over different possible responses to her questions, or their reactions to the text files you decrypt as you read them. (And speaking of those text files, it would have been nice if you could have clicked and drug the position marker to scroll through them faster.) Don't let the cutesy otome-esque vibe fool you... Hate Plus has a meaty narrative filled with politics and human drama that you need to be prepared to sink some time into. It's easy to forget, in the sweeter, more casual interactions between you and the AI you choose, the complex and grim history you're diving into. 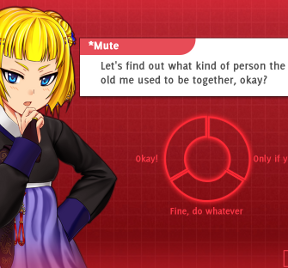 Ultimately, whether you feel the truth behind the fate of the Mugunghwa was worth the wait is up to you, but Love does what she does best and unfolds the narrative with expert delicacy, through layers of correspondence and different people that will keep you second-guessing and rethinking your opinions of them all every step of the way. The character artwork for all the people you read about is also nothing short of stunning, but it's Love's writing that brings them to life and makes you form connections with them that will make you wish you had more time with them. Throw in a haunting ambient soundtrack by Isaac Schankler and you have an experience that will suck you in and make the time fly by. Sadly, while perhaps expected considering the enormous role she had in Analogue, *Hyun-ae feels a little bland this time by comparison, and while pleasant and cute, doesn't really offer much in the way of interest or development. There are things you will only experience if you play with *Mute, and *Mute's story, and her complexity as a character both now and in the documents you'll read about her past, shine.

Hate Plus succeeds in crafting a narrative in the way few other games do, or even bother trying to. It's a story that deftly handles the complexities of both politics and human nature, of why we do the things we do, and presents everything from the smallest player to the biggest villain in complex, startling, and even sympathetic ways. It is, in a lot of ways, an unhappy story, but with moments of joy and bittersweet heartache that will linger with you long after the game is done. Not everyone will appreciate the story-centric gameplay, so you may want to wait for the upcoming demo to see if it's to your taste. Ignoring even the forced breaks between playing, Hate Plus is a long tale, and the replay value makes it even longer. It's not "just" a story about a woman's role in society. It's a story about people, about the best intentions, about love and needs, between all genders and sexualities, and the dark things that can come from that. Play it, think about it, and if you take just one thing away from it, I recommend this, no matter who you are. "Be decent."

Linux:
Get the full version (Steam)

Only one AI with you? Pfff, only if you didn't work to get the secret cheatery ending from Analogue and used the file save from that to continue with Harem Mode.

Am I the only one for which clicking on the scroll button randomly does nothing? It's kind of frustrating, especially when clicking only scrolls one line...

@akailv, you can also get that one without importing a save file from Analogue


Go through the game once with each of the AI's. The new game menu will allow you to say you got the data from both AI's