If your cursor is an ominous grinning human skull, can you really be surprised when your plane takes a nosedive into the ocean? In Fuzzy Bug Interactive's hidden-object adventure Haunting Mysteries: The Island of Lost Souls, you manage to avoid a watery grave by floundering ashore onto a nearby island. Of course, the laws of video games dictate that all unmapped islands at sea have at least one (1) malevolent curse and more than two (2) tortured spirits with unfinished business, so chances are you're not going to kick back somewhere with a mug of hot chocolate until help arrives. It seems the island's previous inhabitants had a bit of a tragic history, and one lonely bride has been mourning her beloved and hiding from the vicious spectre of the man who killed him ever since. Can you put a centuries old betrayal and murder to rest without becoming another casualty of the world's worst case of obsession? 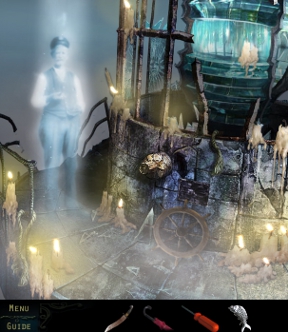 The Island of Lost Souls offers two difficulty modes to choose from, but the gameplay should feel immediately familiar to anyone who has played another game of this type before. The cursor will change as you move it around the screen to show places you can interact with or area transitions, and you can click to add items to your inventory. During regular gameplay, the hint option will highlight any places on the current screen you can manipulate to progress, and in hidden-object scenes it randomly displays one of the items you're looking for from your list. Puzzles will attempt to bar your way towards escape and uncovering the truth, but with the option to skip them if you wait a few moments you probably have a leg up over your otherworldly antagonist that he didn't appreciate. You know, if these evil forces really don't want us to succeed in stopping them and exorcising their dastardly influence to the great beyond, maybe they should stop granting us the ability to completely bypass their overly complex locking mechanisms? Just sayin'. 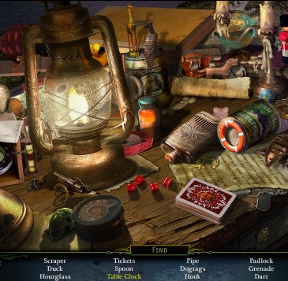 Analysis: There's no getting around the fact that Haunting Mysteries: The Island of Lost Souls isn't particularly original in its gameplay or story, but what's surprising is how enjoyable it is in spite of it. Despite the morbid subject matter, the game itself isn't oppressively dark and manages to strike an admirable balance between a handful of surprisingly effective creepy scenes and the brisk pace of the adventure gameplay. Item uses are logical, puzzles are simple but creatively presented, and the supernatural elements that continually crop up as you explore serve to keep you from losing interest. Ghost typewriter? Skull-faced madman? Awwww yeah, now you're speaking my language! Though the plot has been done before, The Island of Lost Souls carries it through in the gameplay in a way that makes you feel like you're having an impact on it, and serves it up with some lovely visuals to boot. Though am I the only one who thinks that the waves at the beginning of the game look like they're made out of meat?... yes?... huh. Thanks a lot, subconscious, my psychiatrist will have a field day with that one.

Unfortunately, that visual style makes its frequent hidden-object scenes a pain. Combined with a tendency to hide enough of an item that you might not even know what you're looking at when you're staring at it, you'll probably wish the game didn't make you do quite so much scavenging. The bigger downside, however, is that Haunting Mysteries: The Island of Lost Souls just isn't very long. Most players will sail through it unimpeded in under four hours, smashing easily through puzzles like a particularly nerdy Hulk on the rampage. The Island of Lost Souls is perhaps best recommended for players who want something light and easy to sink into for a single evening's play, or those of you with a fondness for fatal love triangles and secret mechanisms. If you want a lot of challenge or longer gameplay this might not be for you, but for a great casual experience with gameplay nowhere near as dark as tends to be popular these days, Haunting Mysteries: The Island of Lost Souls is worth checking out.

Chapter 2: Inside the Lighthouse

Turning on the Winch

Putting the Souls to Rest

Chapter 2: Inside the Lighthouse

Turning on the Winch

Putting the Souls to Rest