I trembled, not from the night air. In the dimly lit stable, I was making my horse nervous, too. But I forced myself to be firm, despite hot blood gushing from my tender, broken lip onto my torn nightgown. 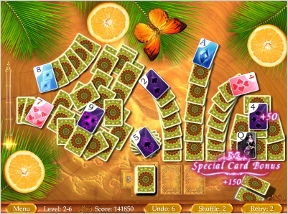 Blood's bitter taste, but I felt no pain. I couldn't. Not in front of HIM.

"So what now, Anne? You're going to shoot your own husband? Like your insane sister?"

Tell me you don't want to keep playing Heartwild Solitaire after an introduction like that. Heartwild Solitaire is marketed as "made for romance readers", so if your second-favourite thing after casual gaming is sinking into a hot tub with a lychee bath bomb and a copy of Love's Turgid Kransky, you're going to love this game. The nice thing is, if you're the sort of person who prefers to lampoon romance novels with titles like Love's Turgid Kransky, you'll still enjoy the challenging gameplay, soothing music and intense colours.

Gameplay is fairly simple: Clear the play field by selecting matching cards by rank. Selecting the King of Spades and the King of Hearts is a match and will clear the board — King of Spades and 8 of Spades will not. You get bonuses for speed, sequential clearing (i.e. 2, 3, 4), and identical cards (such as two Kings of Spades). Special cards not only give match bonuses, they also give power-ups such as extra deals and shuffles. In addition to the main game, there are challenges where you need to play with no extra deal or where you need to quickly select the suggested cards (i.e. all Hearts, the 2 of Clubs).

Sounds easy, huh? Maybe, if you're a solitaire legend and you carefully hoard your shuffles and retries. I got about halfway through the story and ran out of both cards and power-ups. Fortunately, you don't have to start all over again just to find out what happens, as your score will be recorded (if you've made the high score table) and you can start from where you left off with zero points and a new set of bonuses. 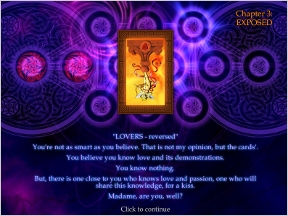 Analysis: What raises Heartwild Solitaire well above a typical solitaire game is the story and ambience. As you play each level, a further chapter of the story is revealed. I won't lie to you — I'm not a romance reader (unless it's something fairly high-falutin' like Wuthering Heights), and the story is somewhat clunkily written. In fact, it gets outright preposterous at times and suffers from a few typical problems of self-published work (oh noes! Typos!). But I really like the idea of a story that unfolds as you play and rewards you for completing levels, and it will be interesting to see what happens if game developers and authors follow up on this idea. If the story doesn't do it for you, you can comfortably spend hours going "ooooh, pretty" at the iridescent backgrounds.

Heartwild Solitaire is available to download from these affiliates:

I'm intrigued by the idea of a story line that unfolds with gameplay, too. It doesn't quite work here, not because of the prose (frankly, most romance writing is a bit on the purple side. You either like it or not), but because there doesn't seem to be any link between the gameplay and the story.

I think it would work if paragraph installments came a bit faster (perhaps between boards), and the story had a choose your own adventure aspect based on card play (perhaps special power up cards--does she choose The Emperor or The Hermit?)

That said, it's a pleasant enough solitaire variation. Things like powerup cards and the bonus timer make for a game that actually has a reason to be on a computer beyond removing the need for space to lay your cards out on.

That (choose your own adventure) is an excellent idea for a game. Any takers?

Thanks for the mention of CrossOver--we appreciate it.

As a regular reader of Romance, I'm offended that people think the writting in this game is typical of the Romance genre and are willing to overlook just how awful it is. I found the writing so over the top that it it approaches the level of satire. The tale is mostly told through dreams that metaphorically explain the characters growth. The writer gets completely carried away with her own cleverness and forgets to include a real story, which leap frogs across time in away that removes all interest and suspense. The game itself has potential but is flawd by mechanics that are divorced from a sense of reward. The main thrust of the game is to clear each level so you can get more of the story but the game focuses on scoring in which are rewarded for behaviors - speed, serial runs of cards and identical matches. However if you attempt to rack a high score you will make it impossible to a clear a level which is best done making slow thoughtful moves, since the play format is basicly mahjong with cards. Special cards that you let reshuffle the remaining cards or redeal a hand - crucial to being able to regularly clear the boards since many are unsolvable as dealt are handed out randomly. They should have be tied to ones scoring combinations instead, giving one an incentive to aquire them. The music is soothing and colors attractive, but the game play quickly gets stale and repetative. I don't think it deserves the praise it has recieved.