Don't let the title fool you, Hermit Rabi and Wonder Fountain is not an adventure comic featuring the twisted duo of a reclusive Torah teacher and an architectural water shooting superhero, although that would be pretty radical (call me, Stan Lee!). Instead, we're talking about the latest and greatest room escape game from Robamimi, one of the best designers in the business, although perhaps not as good when it comes to English translations... 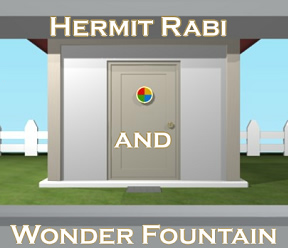 Hermit Rabi and Wonder Fountain (alternate title: Spring Bunny Hermit and the Curious Donkey Ears, which makes slightly more sense) tells the story of a lonely bunny, wasting away in his hidey hole, pining for fresh carrots and locking hapless folks in his strange underground bunker until they bring him some orangey carrot goodness or figure their way out, or both. At least, I think that's what this game is all about, I could possibly be horribly wrong. What looks at first like a classic one room four wall escape quickly turns into something quite different and somewhat bigger (and stranger). Featuring a lot of fun puzzles (including some color-based) there's more than first meets the eye in this delightful escape.

Hermit Rabi plays like a standard room escape with navigation bars at the sides and bottom of the screens, an inventory of items that you can pick up, take, examine, and use, and many of the features we like to see in top-notch room escapes like a changing cursor, a save function, a lovely sliding volume on the easy-listening music loop, a strange life-sized bunny, and even a hint feature. Well, if other designers can't be bothered to have Harvey in their games it's their loss, isn't it? Other than the somewhat creepy rabbit we're talking top-notch controls which make for a fantastic gameplaying experience.

Robamimi doesn't just put all of their efforts into the control structure of the games, though. Hermit Rabi is a satisfying little adventure chock-full of puzzles, logic, use of found objects, combining objects, and communicating with imaginary rabbits. And, of course, the graphics are first-rate as well, especially the animation of our furry little friend with the carrot fetish. With this designer you get the whole package: fantastic gameplay, intuitive and easy to use controls, and gorgeous visuals, making Robamimi one of our favorite and go-to room escape designers.

So get ready for a perfect mid-week break with Hermit Rabi and Wonder Fountain. Logical, amusing, fun, and tricky, we've found one fantastic room escape for you to tackle. Just remember, if you think real large rabbits are locking you in a bunker in order to obtain their precious carrots, perhaps it's time to get up and walk away from the computer for a little while. Just saying.

The Computer and the Membership Card

Hermit Rabi and the Big Stick

The Fountain and the Marbles

Stuck on the wall puzzle... Would love some hints (will provide some delicious spoiler if I figure it out first)

I had the right idea, there's no trick to it; I was just reading one of the parts wrong there... My own stupidity, really.

Pretty simple. Got tripped up for a second when I didn't realise I could retrieve an object I'd used, but after that epiphany I was out.

Are you talking about the picture puzzle?

I think I'm at the very end, but I need some help:

The hints say there's a card in the kitchen cabinet, but I can't find it.

Done and done. Not too easy, not too hard.

Nevermind, found what I was looking for.

is under the cabinet

Finally got out! The first route takes trial and error but yay!
The rabbit was sort of creepy at the end but I really enjoyed the game. Nice relaxing music and no pixel hunting.

measuring tape, laundly (laundry?) pole, and the bar. Where do I find the ume yamano measure?

Actually, there's a big clue for the first route back in the main room.

Looked at the wall to the left of the cabinet back in the main room?

Examine that stick the bunny rabbit gave you a little more closely.

That was really fun! Figured it out without any help. The only thing that gave me any trouble was the wall picture, but I got it eventually.

I actually thought that wall picture was pretty clever, considering:

that it was not only the clue for the wobbly picture puzzle, but also the actual first route through the maze.

What do I do with the slingshot? I have it loaded but can't find where to fire.

What's the combo for the drawer?

So, I've got to end, used every item, and I cannot work out what to do next to finish it.

I broke down and asked for a hint, and it isn't much use... I think.

Have you figured out the picture puzzle yet? You won't have a target until you do. You also won't know the combination to the drawer. Don't forget to look behind things.

OzDan:
Where specifically are you? What items do you have left?

Well, all the items are greyed out, but this what I've just done:

I've just used the key/laundry pole/rope to unlock the door.

I've tried taking back both the marbles and the metal pole, but can't think of what to do with them. Wondering what I've missed...

already unlocked the door using the laundry pole/key/string combo, then all you need to do is go back through the maze to the elevator, get on the elevator and go up to the door. Click on the door and you can escape.

Ahhhhh, that hit the spot. Had to use the on-board hint system once to figure one thing out, but all in all, wasn't too difficult to be enjoyable.

The Computer and the Membership Card

Hermit Rabi and the Big Stick

The Fountain and the Marbles

I'm totally stuck... I have

a little help with the ending please:

Haha, I don't believe it... I played this one yesterday :)

I liked it, except for the "labyrinth" part, A good one.

W00t! Out and done with only a couple of the in-game hints. Cute game!

I bet if you gave a certain someone a bottle of carrot juice, he'd be willing to give you a hint. Don't forget to open it for him.

If you do have the laundry stick, then all you have to do is bring up the stick in your inventory, put the key on it, then use the string on them.

A few things frustrated me...

It didn't occur to me to tie the key to the pole, since I appeared to have "stuck" it there anyway. And I didn't realize without a hint that the rabbit couldn't just open the carrot juice himself.

One of my favourite escape games. There were points where I was quite confused but still managed to solve it in the end without relying on the walkthrough.

Either that was really simple, or I am getting really good at these! It was a fun little with interesting play. Very simple puzzles, but I like that you didn't have to pixel hunt.

That was a lovely little escape game... got everything right! No pixel hunting, clever but not illogical puzzles and fun item manipulation. The only thing I would have said is I would like a little more details in the rooms just to make it more involving.

when you go into the basement and come back out, right before you enter the room, you can still see the string connected to the chair, even when you have already cut it

Where is the pole and the other marble? And what to i do with the slingshot??

ROFL:
If you haven't used the slingshot yet, you won't find any poles, or the other marbles. The slingshot can only be used if you've

removed the picture from the wall

stuck that switch in the "Open" position.

Innovative re-use of items. I love it.

Good game, let down by the string/key thing at the end i.e they key should't have stuck to the pole if you needed the string.

We spent 10 mins trying to unlock the door before going to the walkthrough to find you needed the string!

Great escape! Not so easy it was boring but not so linked to math or impossible to understand riddles that it wasn't fun. Not too long, not too short. More like this please!
-BlueIceEye

Looks like the link is broken - is there a mirror anywhere?