In Tachi's funky free indie RPG adventure Hero and Daughter, translated by vgperson, Ralph may be an all-powerful hero, but he's also pretty smartmouthed and big-headed, which is why he winds up being busted all the way back down to level one as punishment when he decides defeating the dark lord would be beneath him. Now he's got to grind his way back up to proper legendary status to take the Big Bad down if he ever wants to be restored to his former glory, but how's a punk like him supposed to do that when he can't even handle a lowly slime... especially when he discovers can't actually level up? Well, it so happens that a kindly Summoner takes pity on Ralph and decides to help out... by summoning pretty girls. Pretty girls who are a lot more powerful and pack a bigger punch than Ralph himself. By finding other Summoning Stones, you can unlock new ladies to add to your party, each of whom not only has her own unique abilities, but her own story and personality as well. Packed with replay content and getting updated all the time with even more, Hero and Daughter is a strange but unique and addictive dungeon crawler worth checking out... with a few caveats about some troubling scenes and themes. 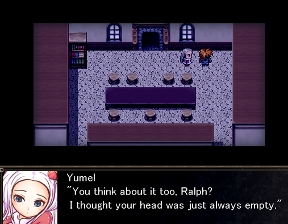 Every time you enter a dungeon, the layout and treasure is completely randomized, though you can find someone in town who can tweak certain aspects of what you encounter, like adding more enemies or restricting treasure to weapons or armor. Since Ralph can't survive on his own, you need to find Summoning Gems, found randomly in special chests, to unlock new girls to add to your party. The girl summoned each time is random, and you can have up to three in your party while the others stay behind. Combat is your typical turn-based affair, though you can see monsters on the map so there aren't any random encounters. In addition to magic points, you also have TP, which increases any time a character is hit or deals damage, and can be used for special skills during battle. Each gal levels up normally, and while you can teach any of them magic by buying tomes, they all have their particular skillset and special abilities. Strega, for instance, is a powerful magic user, while Lara is best suited as a brawler, and they'll learn new skills at set level intervals. A girl's affection increases with gifts, but more usefully with each monster you defeat with her, and high affection unlocks more scenes when you return to the tavern between dungeon runs.

The town winds up being extremely important, as you can level that up too, which gains you better items in shops, but also because visiting the restaurant is one of the only ways to permanently increase Ralph's stats. Since he can't level up with experience points, you need to raise things like attack and hit points either by using the permanent increase items you can find in dungeons, and by eating. You can choose a single dish each time you return to town, so don't neglect it! Eventually, monsters will begin attacking the village while you're gone, and a random assortment of the girls you left behind will have to defend it. As a result, you'll want to spend some time with everyone making sure they're packing enough levels and equipment to do damage on their own. Just make sure you save frequently whenever you return to the tavern, since it's the only place you can do so! 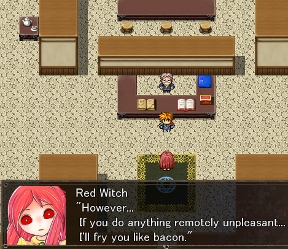 Analysis: Despite the game's cheesecake-y premise and the harem jokes, Hero and Daughter is actually interesting in that it's actually less about building a "harem" at all, and more about assembling a super-powered all-female death squad to save the world. Not only are all the women more powerful than Ralph, but they're also not simply pressed into service just because they're summoned... Ralph asks each of them if they'll join, and of course they say yes, but that simple request and the balance of power within the game keeps it from turning into a potentially gross "chicks as commodity" situation. At the same time, most of the girls are drawn with, um, rather ridiculously generous proportions that don't look or move the way those body parts typically should, to say nothing of the equally over-the-top skimpy outfits, and while still trying to come off as goofy, some of the girls and their interactions are a little troubling. There's Priscilla's "kink" that comes across more as emotional trauma, the way youngster Liv gets some uncomfortable jokes about her age and what she'll do for money tossed off in a "oh, you scamp!" fashion, the outright rude and dismissive way Ralph insults the appearance of the only "plain" looking girl for giggles (and completely destroys any karma he might have built up for how he treats the others)... I get that it's meant to be light-hearted and intentionally "cheesecake"-y, but whether a player can enjoy it all as such or finds some of it more ignorant than innocent remains to be seen. 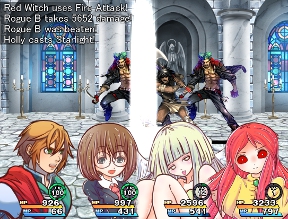 Of course, at its core, Hero and Daughter really is all about the grind and repetition, with the latter mainly being an issue since the dungeons are so bland. Cash and equipment, but especially levels, and with so much of its content either locked away initially or only available through randomisation, players who prefer their RPGs to have a more present narrative might find this one a bit much. While you'll likely find a group of girls you prefer, the game actually discourages you from sticking with a single party the whole time, since the way the monsters raiding the town increase in levels each time means those left behind need to have enough punch to take them down, especially since they're chosen at random. The village elements are a clever touch, as is the way you have to increase Ralph's abilities in a non-traditional way, but in the end it's still all down to grinding, be it for levels, cash, or items. There's still a surprising amount going on under the hood, like the way your performance in dungeons influences certain factors in the village, the way chain bonuses streamline grinding for levels, or even the ability to alter the number of monsters, floors, and types of treasure in a dungeon.

Hero and Daughter may not have much of a story, but the tweaks and twists it adds to the classic dungeoncrawler formula makes it remarkably addictive. Despite misgivings about some themes, there's enough here to recommend, and discussing something's issues in a critical way tends to be better than simply blacklisting it. Its over-the-top gratuitousness may limit its audience, but if you enjoy a good dungeon crawl with a sense of humour, Hero and Daughter fits the bill, even if it bursts a lot of seams and bras in the process.

The food prices go up, but so do the stat gains in direct proportions. However, the gains are determined by your modified stat. At around 125, you begin getting diminished returns. This can be delayed by clearing your equipment before buying food.

In the top right of the village is a sign. If you read it ten times, it explodes and gives you access to a monster den. You can set these monsters to automatically repel attacks on the village.

It's entirely possible to go through with only a single party of characters (in fact, that's what I did) by only summoning three times and playing the game with whatever comes up, but you lose out on the town getting XP over time.

The XP gained by your Lvl 1 hero can be transferred to any of the actually leveling characters, and through them to the monsters guarding the town.

Waiting until you have a few levels on the bounties leads to a Rofl-stop. You might want to get them while you're close to them so as not to remove the fun of figuring them out.

Money is in my opinion practically worthless, except for buying accessories to grind rep. A load of the highest level accessories should get your town to level, and then you can use those on the characters you don't use often to get dialog.

Each character learns a new ability every 10 levels it seems.

The chain for monsters is amazing. It should be used at all times. Yes, higher level dungeons have higher XP gains per monster in the chain. For newly summoned characters, the Level 2 dungeon works well for grinding, with a cumulative +25 XP boost per monster, and triple that for the elite mobs. As an example, around floor 4 the chain gives an extra 1225 XP per battle, and the next elite in the chain would give 1250+1275+1300 XP.

It's not quite as grindy as I was worrying, though I may be playing it that way simply because I like having abilities unlocked.

A little question about endgame / post-endgame:

After you beat the supposedly final boss (end of the 8th dungeon), is there some sort of new content after that, or does the game simply continue as a sandbox so you can complete anything you missed? I can't see anything else but after the hint dropped by the boss, it wouldn't surprise me if there was a timer or a hidden trigger.

I keep on hitting a bug with an empty message box several times and end up having to restart to clear it...