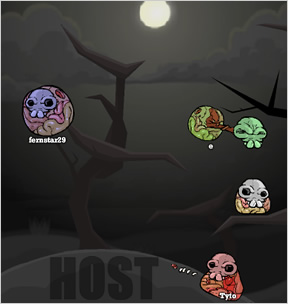 The first full release from Diverge Creations, Host is a multiplayer fighting game where you play a deranged mutant. It has great art from the same chap who worked on Gish, it's easy to pick up and a fair bit of fun.

The gameplay is simple, you control your parasite with the [left] and [right] arrow keys for movement, jump with the [space bar], fire a projectile with the [S] key and attack and/or eat the hearts of your enemies with the [A] key. Your parasite's condition is represented by an icon off the top, it includes your name, your health bar represented in the red, and the down-time between ranged attacks represented in white. The goal is to defeat other parasites and rack up five kills to win a match. When you defeat an opponent, its heart falls out; eating the heart regains some health but also makes you larger, which makes you easier to hit.

Despite only having four verbs (five if you include the cannibal feedback loop of heart-eating) the game has a satisfying amount of depth due to the complexity of the physics. In addition to the usual jumping around, the parasites slide along the ground due to momentum, so the end result is a very smooth feeling where nuanced timing makes all the difference. You can also follow-through with a one-two combo of launching a point-blank projectile before a melee attack. My primary criticism though is that this level of depth is not in a league with other multiplayer games that keep you coming back to over a long period of time. It's not Street Figther or even Virtua Fighter. Some added depth might be found with a time-release mechanism, where holding down the projectile key longer leads to a bigger arc on your shot — then it becomes like a streamlined, real-time version of Worms, which could be both deep and instantly gratifying.

The game runs off the MMOcha server platform, which seems to be a great technology for Flash-based multiplayer games. The interface to join games is very smooth: you can skip registering an account and jump right into a currently running game and go at it. If you're willing to take a bit more time you can customize your parasite, maybe give it heavy metal hair or buck teeth, or register an account to have your win-record compiled to a leaderboard. Here as well, though, I feel like some kind of long-term commitment scheme is missing; you can try to climb the board, sure, but beyond that what reason is there to commit? I'm sure the clever guys at Diverge can figure out something as time goes on, and I'd like to see it.

If you've ever wanted to eat the heart of someone 5,000 miles away, play host to Host.

All I can really say is keep the kids away.

I tried but was immediately slaughtered by people speaking Spanish. I countered by yelling at them in Tagalog but to no avail.

i cant figure out how to star playin.....

Game was quite interesting but little difficult to play until it get practice, nice entertaining game no age limits all can play....

how do you host a game?

To host a game, put your maggot in the opening (not the holes with other parisites in it, the one that reminds me of an eye) with the text "host a game" and an arrow pointing towards it.