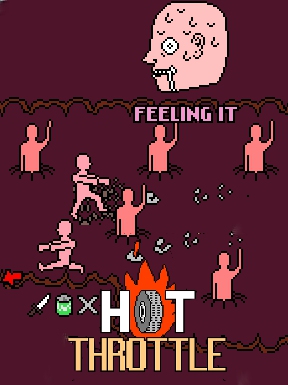 Oh God, Cactus, what have you done now? Is Hot Throttle some sort of twisted experiment? Whatever it is, I can't stop watching, or stop playing for that matter. You see, Hot Throttle is about car racing. But you're not actually a car. You're a naked man who thinks he's a car. Yep, you heard right, and that's not even the weirdest thing about this game.

Gameplay wise, Hot Throttle is a solid entry into the Mario Kart style combat racing genre. Race using your [arrow keys] on five different courses in tournament play or single races. The courses are littered with bystanders to collide with and garbage bags filled with gross-out projectiles and mines. Getting through the race with few collisions is the name of the game here. The longer your racer moves uninterrupted, the more "in the zone" they are about being a car. The more they think they're actually a car the faster they go. Don't ask me to explain.

Tournament play is the main attraction, allowing you to upgrade your car-man between races and submit a final score. Regardless of what mode you play, the surreal non sequitur skits before and after levels will be your most vivid memory of this game. The levels are inventive too, and filled with detailed scenery and pedestrians. I just wish the racers themselves were easier to distinguish, and that the bends and turns in the courses were easier to anticipate.

You need to at least overcome any aversion to weirdness you might have and give this game a try. It's like watching a car wreck. Only the cars are people who think that they're actually cars. Wrap your mind around that.

Great fun! Quite the game to wake up to.

The is the last game on the internet.

@JIGuest
Maybe it's your browser, or extensions, turn them off, use another browser or refresh/reload the page.
Try before you say like it's a fail (no offense but critics say that easily when they are just being dumb).

This is either the best game ever. Or the worst.

Also I can't stop playing it. But only in short chunks.

That's it. The internet's over. Everyone go home.

Oh my. Well that was the strangest...

Ah well. It was fun anyways.

I like that kind of off-beat humor. If there ever was a game about tripping - this is it.

"You can have them"

Fun game!
I certainly didn't expect to see it on JiG. Hah!

Reminds me of Cuboy's creation target: "It can't possibly get any weirder than this".

For a racing game, the route should be more clearly defined, instead of punishing the player from slight deviations by forcing them to repeat entire laps, right? Taking unindicated back-roads should be rewarded, surely? Sadly absent.. although, it did make me want to run around the city centre making vroom-vroom noises...
Could sheer insanity have made this game impervious to criticism? Why yes, it just may have done.

What could I say about this game without being overly negative: nothing.

I agree that this is either the best or worst game ever. The game play is a little too repetitive for me, but I play it for the after race cut scenes.

I have three words to say : "Best game ever"